We Have Nothing to Fear but a Lack of Fear Itself 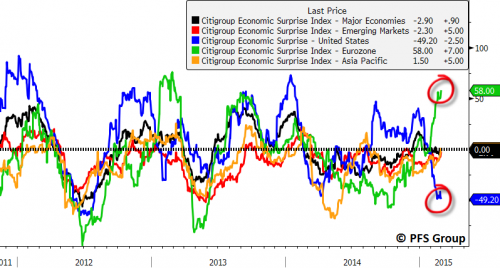 The S&P 500 had its first monthly close above 2100 in February, the Dow closed over 18,000, and the NASDAQ currently rests a mere 3% below its 2000 bubble peak of 5132.52. Why is the stock market heading higher when incoming economic data is surprising to the downside? The Citigroup Economic Surprise Index (CESI) for various global regions shows data for the U.S. currently rests at the lowest levels seen in nearly three years while the European CESI is near a two-year high. What is surprising is the resiliency of the U.S. market in the face of such a sharp decline in positive economic surprises. Declines of the current magnitude have often marked the big corrections we’ve seen during the bull market.

….continue for 9 more charts and the summary HERE