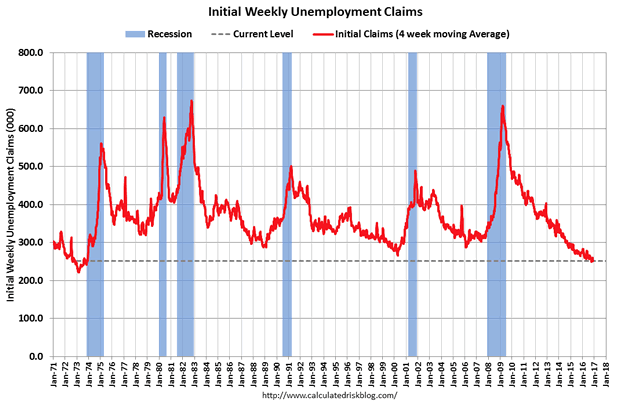 It’s the same story every time: Imbalances build up during a recovery but most investors ignore them because good times have become the new normal and the uptrend seems bullet-proof. Then things fall apart and everyone wishes they’d paid attention to history.

This series will cover a few of the more glaring examples of late-cycle myopia, beginning with jobless claims, i.e., the number of people joining the ranks of the unemployed.

In hard times when layoffs are widespread and new jobs scarce, this number spikes. In better times, when jobs are plentiful and employers are desperate to keep good people, the number falls.

But when it falls past a certain point wages start rising at a rate that leads (through market forces and/or Federal Reserve actions) to rising inflation and higher interest rates, which are destabilizing and generally cause a recession.

So let’s see what this stat says about our place in the current business cycle: It certainly looks like we’re back in 1999 or 2007, with a tightening labor market at the tail end of a long recovery. If so, interest rates should be rising. And they are:

On the surface, at least, the US seems to be following the standard script: A few years of recovery, followed by a tightening labor market followed by rising interest rates. Followed by a recession that works off the imbalances built up during the expansion.

But the interesting part of the process is always the (many and seemingly quite reasonable) reasons why it’s different this time and the old rules no longer apply. The latest batch includes the following:

1) The terrible quality of the new jobs being created. Where in past recoveries people who were initially laid off tended to eventually regain their old jobs or something similar, in this recovery the new jobs are mostly in service industries (read bar-tending and waitressing) that are no one’s idea of career-track. So there’s room for a few more years of growth to get those people back into their old high-paying spots before wage inflation really gets going.

2) The incoming administration is proposing a big increase in government spending and tax cutting, paid for with borrowed money. This is stimulative and should turbocharge growth, which in turn should boost corporate profits, making stocks a lot more attractive.

3) The next stage of monetary policy experimentation seems to involve central banks buying equities more or less indiscriminately with newly created currency. The Bank of Japan, for instance, now owns about half of that country’s equity ETFs, thus providing a huge boost to the Japanese stock market. Let the Fed decide to join this party and it’s anyone’s guess how high blue chip stocks can climb.

When laid out this way, these do sound like compelling reasons for optimism. And maybe they are. But remember, every single expansion in the past century came with equally-strong arguments for ignoring traditional limits. And every one of them turned out to be illusory.

….also from Martin Armstrong: The Cycle of Assassination & War Bottomed in 2014