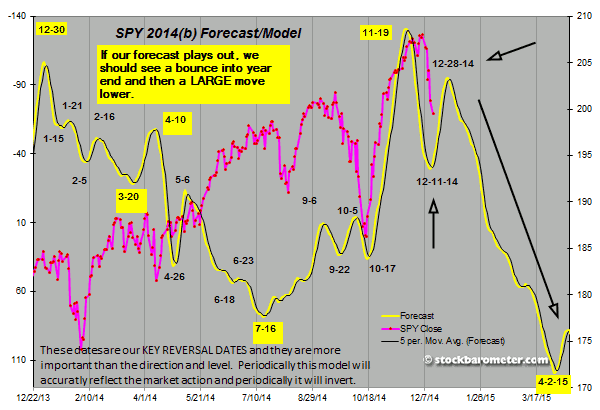 As the oil drop plays out in global economies – Russia’s push to 17% interest rates is an ominous sign worldwide. Let’s start with our forecast:

To support the potential of a large move lower: It’s all about this move in oil: In the short term: Unless the crash initiates now, which is less likely but not impossible, I expect a bounce into year end. The mid term line above will bounce to just below the zero level where a larger move lower will begin. The move from the 2009 lows has been historic and while it can go higher, it’s culminating in a sell off at some point. Even 20% would be a significant move. So while we can play short term bounces, I would be very cautious entering 2015.

The Fed meeting and options expiration are playing into where the market is right now. I would expect the bounce to initiate in the next couple of days. During the bounce, I expect to see more evidence of distribution setting up the next move lower.

You can’t control markets, you have to let them play out. And all markets are related – so I expect this move to filter through other markets eventually…