Violence Flares in Europe! ECB Protest Shows How Out of Touch Bankers Are! 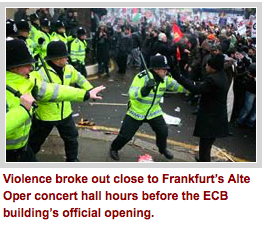 You couldn’t ask for a more poignant, more blatant illustration of how out-of-touch central bankers are with the average man on the street than the one we got this week in Europe.

They were there to celebrate the inauguration of a gleaming new 1.3 billion euro ($1.4 billion) headquarters building. The tower isn’t literally made of ivory; it’s a 600-foot-tall tinted-glass edifice that took five years to build. But as sheltered, privileged, and isolated as its policy members and staffers are, it might as well be! Meanwhile, a group called “Blockupy” decided to rain on the parade. It drew from a wide range of members and more than 90 affiliated groups around Europe to organize a major anti-ECB protest. Those affiliates included a leading German labor union and the Greek Syriza party that was swept into power on an anti-austerity platform this January.

Estimated to be several thousand strong, the protesters torched police cars, tires, furniture, and garbage. They blocked major roads and bridges, prompting tear gas volleys from authorities, as well as more than 350 arrests.

Why is Blockupy so mad?

Because they maintain that the policies pushed by the ECB, the International Monetary Fund, and the European Commission represent the vested interests of the wealthy investor/banker/creditor class. They do nothing for average workers and citizens but push them further into a nightmare of unemployment and poverty, all in the name of preventing losses for the well-to-do.

The bigger issue here is that we’re seeing more and more tension boiling over like this. Not just in Frankfurt. But all over Europe, the Middle East, South America and more! You could even throw the U.S. in that mix, given some of the major protests we’ve seen recently.

The common thread is the gap between the haves and the have nots. Government officials and central bankers have failed to address that gap in a cogent, effective, and sensible productive manner. Unless and until the economic recovery broadens out — and policymakers stop trying to coddle bankers at the expense of everyone else — we’re going to see more and more Frankfurts on the evening news.

That, in turn, will lead to more market volatility. We’ll see increasingly wild swings in currency, bond, and stock markets — with all the attendant consequences for your portfolio! So be sure to keep your eye on my latest Money and Markets updates.

Or for more specific advice and actionable “buy” and “sell” signals, give my Safe Money Reportnewsletter a try. In light of the increased volatility — and the risk of an impending “Bloody Wednesday” event due to recent central bank actions — I just sent out a crucial, time-sensitive alert to my subscribers last week. They were able to bag double-digit profits on a long-held position as a result, and I foresee many more such opportunities around the corner!