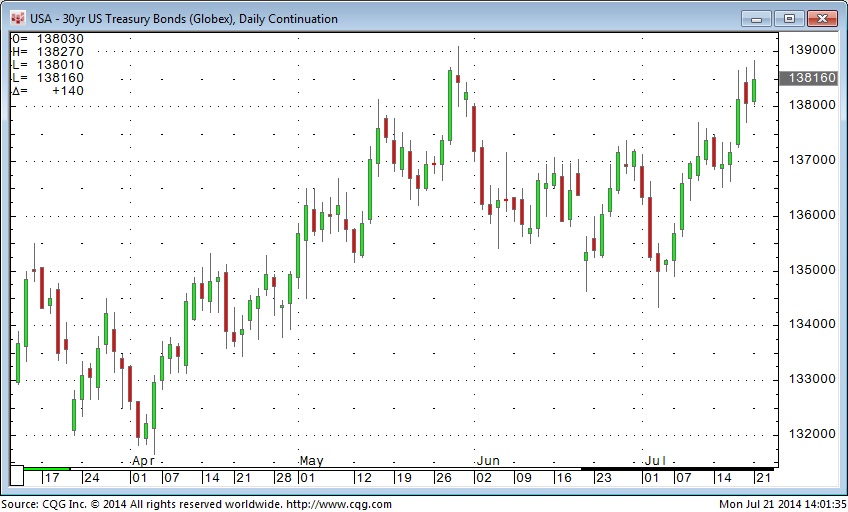 We see markets “priced for perfection”…vulnerable to a correction…from a geopolitical shock or from a growing perception that the Fed will raise interest rates more and faster than people think. We think it’s time for investors to get defensive…we see signs that the smart money is already taking money off the table.

We see markets “priced for perfection” as yield-hungry investors pour billions of dollars into the sovereign bonds of obscure countries at tiny premiums over US Treasuries…as option volatility falls to all-time lows…as leverage ramps up to all-time highs. Our good friend BOB HOYE describes the recent market condition as, “Euphoria in the credit markets!”

David Rosenberg reminds us that it’s been 8 years since the Fed raised rates…that we’ve gone 33 months (double the norm) without so much as a 10% correction in the stock market…but last week the DJIA registered a new All Time High Weekly Close…despite geo-political shocks in the Ukraine and Gaza.

BUT…we see signs that the smart money may be quietly slipping out the back door…or at least getting much more defensive. We think capital is moving from the periphery to the center.

For instance, so far in July:

1) Treasury bonds have rallied while “weaker credits” have fallen…credit spreads are widening. 2) The DJIA has made new highs but the broader S+P 500 has gone sideways…while the much broader Russell 2000 is down…the major European stocks markets are down…(L to R: DJI,S&P,Russell) 3)The US Dollar has been rising against most currencies and if it rises another 1.5 to 2% (trading above 8100/8150 ) it will register a significant breakout. We’ve been anticipating a reversal in bullish Market Psychology to cause:

We think the reversal in Market Psychology has begun…that the key market to watch is the US Dollar…because if the US Dollar starts to rally then EVERYTHING changes. (See: Ambrose Evans-Prichard’s prediction of a  “BLISTERING US DOLLAR RALLY” on www.VictorAdair.com)

We think that over the next few years the US Dollar could rally like in did during President Reagan’s first term (it DOUBLED in just over 4 years) or during President Clinton’s 2nd term ( it rose more than 50% in 6 years) as global capital flows to the relative safety of the USA…to the much freer and more innovative American markets…here’s a quote from our July 2nd blog:

“Longer term we expect inflation to erode the purchasing power of the dollar….but capital flowing from the rest of the world to the relative safety of America would see the dollar rise against most currencies. We can imagine a rising USD, rising interest rates and rising stock markets all happening at the same time…a “virtuous circle” based on a relatively stronger and safer America drawing capital from the rest of the world…with that capital flow pushing stocks higher and those gains drawing more capital to America…thus continuing to boost the USD Vs. other currencies. Something similar happened during the 1995 to 2001 period (Clinton’s 2nd term) when capital flows created a virtuous circle of rising interest rates/rising USD/rising stocks which caused the US Dollar Index to rally ~50% and the S+P 500 to gain more than 200% (while the US$ price of gold fell from around $400 to less than $300.)”

A US Dollar Bull Market is not typically good for gold, commodities or commodity currencies.

We remain long the US Dollar Index…and short CAD. We’re looking for other opportunities to make “USD bullish” trades…waiting for markets to “set up” for short positions…possibly in NZD, GBP and EUR. We may buy the Yen Vs. USD and/or EUR.  We have taken very short term short positions in the S+P…waiting for “set ups” (for instance, a break of 1940) to confirm that it’s time to take longer term positions.