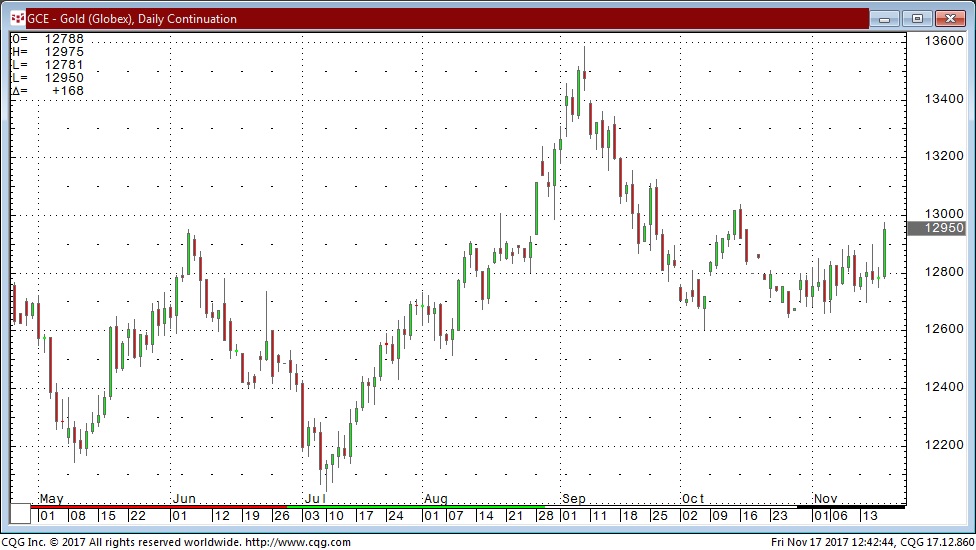 I have a longer term Pro-USD bias…perhaps because I’ve made money the past few years being short currencies against the USD…but right now I’m unsure what to do so I’ll stay out of the currency markets. Victor outlines opportunities in Gold, Crude Oil and the Stock Market

Choppy price action in currencies: The September 8 Key Turn Date launched the US Dollar on a 2 month rally against most other currencies…the US Dollar Index rose 4.5%…but the past 2 weeks the price action was choppy with Euro, Yen and Gold all higher against the USD while AUD and NZD fell and CAD went  sideways. My core short term trading idea since the Sept Key Turn Date has been to be long USD but for the last 2 weeks I’ve been on the sidelines…unsure what to do.

Some analysts make the argument, and they may be right, that the recent 2 month USD rally was only a correction in the downtrend that started in January when the US Dollar Index was at 14 year highs. Interest rate premiums clearly favor the USD (at the 2 year point of the yield curve the USA is premium Germany by 242bps., premium Japan by 192bps.) but those premiums have not deterred a good rally in Euro and Yen the past 2 weeks. The ECB says the Euro area needs continuing monetary stimulus while the Fed says they will be “taking back” previous stimulus and raising rates…while the BOJ remains “peddle to the metal”…but still the USD looks wobbly.

Perhaps the USD is weighed down by “political uncertainty” in Washington relative to the “political certainty” (don’t laugh!) of the Euro zone.

Other analysts make the argument, and they may be right, that the recent 2 week decline in the USD is but a brief correction in the early stages of a developing USD rally.

I’m aware that I have a longer term Pro-USD bias…perhaps because I’ve made money the past few years being short currencies against the USD…but right now I’m unsure what to do so I’ll stay out of the currency markets.

Gold: I bought gold this morning. A small position, and I’ll be gone if it falls back below yesterday’s close, but today’s price action looks good. I’ve noticed that YTD trading volume in the gold futures market is already higher than any previous year…and there’s still 6 weeks to go in 2017. That seems counter-intuitive given the sideways price action we’ve seen in gold while open interest remains well below last year’s levels. It’s as though gold has been “churning” below the surface…just waiting for a breakout one way or the other. WTI: I’ve been out of the crude market for the past 2 months or so…waiting for an opportunity to get short. I’ve missed a great opportunity to trade the market from the long side because I’ve got a bearish bias…likely due to the fact that I’ve made money the past few years being short crude! Anyway, I waited and waited while the market rallied…apparently embracing the story that the cut back agreements by OPEC and some non-OPEC countries were not only “doing the job” but would be extended at the OPEC Nov 30 meeting. The “political uncertainty” in Saudi Arabia seemed to provide the “cherry on top” of hugely bullish sentiment and WTI rose to $58. I decided that this was “As good as it gets,” for WTI and got short. Prices fell $2 but then turned around and began to rally. I covered and went flat. The stock market: last week and again this week the stock market looked “jittery” at different times but the major indices continued to rally back from the dips. I’ve been thinking that the market was “cruising for a bruising”…waiting for a chance to trade it from the short side. But to no avail, and, in what may be the kiss of death for the bull market, I bought the S+P! This is a pure price-action trade and not a vote of confidence…if the market doesn’t make new highs in a hurry I’ll be gone! The $450 million da Vinci painting: Drew pointed out that this was a fantastic example of “not wanting to be in cash.” And maybe that’s the simple answer as to why the stock market keeps going up. People just don’t want to hold cash…not only that, but they’re willing to go deeper into debt to buy stuff. The central bankers must be smiling!

PI Financial Corp. is a Member of the Canadian Investor Protection Fund. The risk of loss in trading commodity interests can be substantial. You should therefore carefully consider whether such trading is suitable for you in light of your financial condition. In considering whether to trade or the authorize someone else to trade for you, you should be aware of the following. If you purchase a commodity option you may sustain a total loss of the premium and of all transaction costs. If you purchase or sell a commodity futures contract or sell a commodity option  or engage in off-exchange foreign currency trading you may sustain a total loss of the initial margin funds or security deposit and any additional fund that you deposit with your broker to establish or maintain your position.  You may be called upon by your broker to deposit a substantial amount of additional margin funds, on short notice, in order to maintain your position.  If you do not provide the requested funds within the prescribe time, your position may be liquidated at a loss, and you will be liable for any resulting deficit in your account. Under certain market conditions, you may find it difficult to impossible to liquidate a position. This is intended for distribution in those jurisdictions where PI Financial Corp. is registered as an advisor or a dealer in securities and/or futures and options. Any distribution or dissemination of this in any other jurisdiction is strictly prohibited. Past performance is not necessarily indicative of future results.