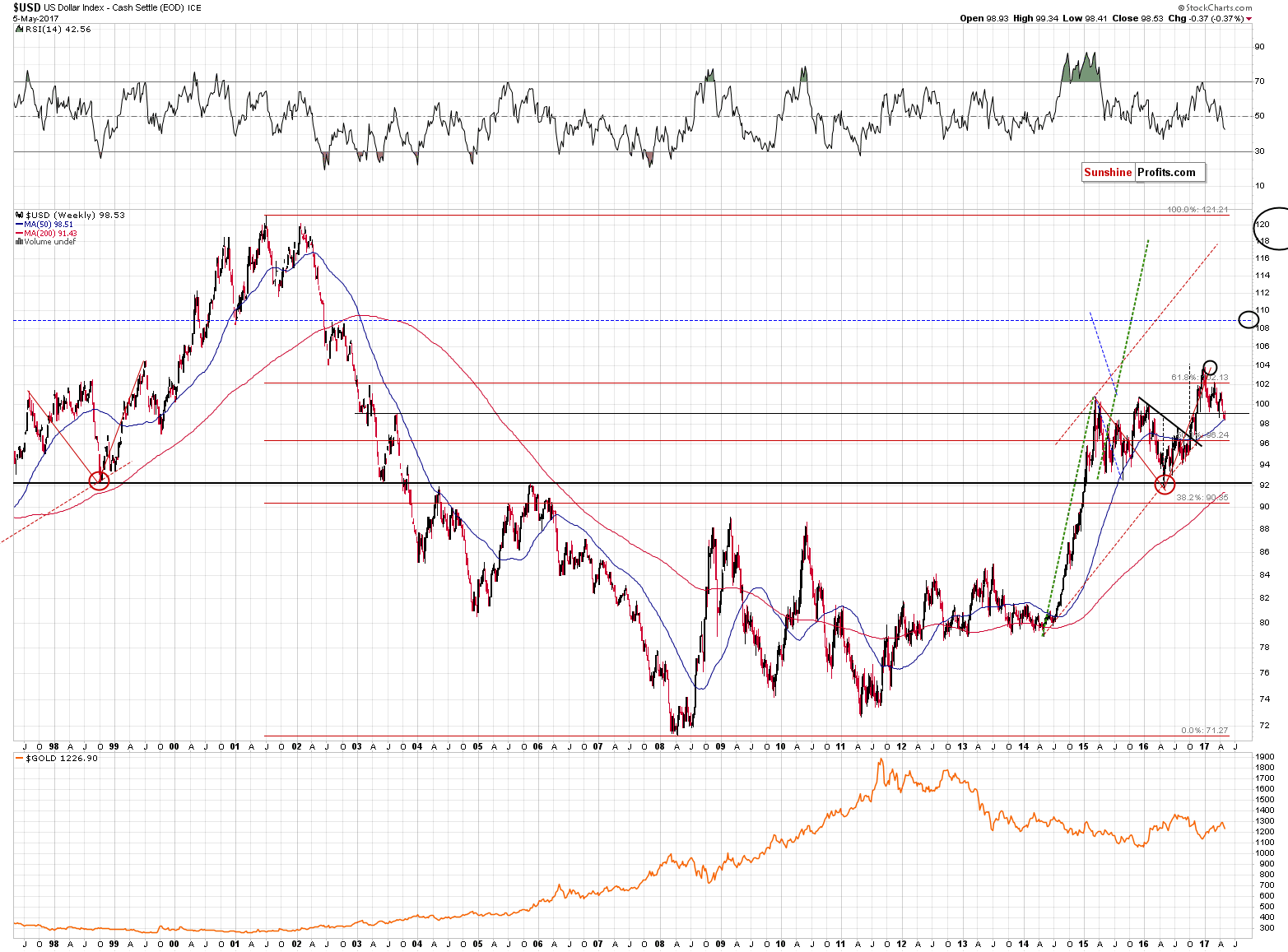 The USD Index has been declining in the past several weeks (and in general in 2017). The question is if this weakness changed anything regarding USD’s long-term uptrend?

Let’s take a look at the charts (chart courtesy of http://stockcharts.com). We don’t think so. Another very important long-term support level was reached last week (the 50-week moving average), which stopped the declines 3 times in 2015 and served as support and resistance on other occasions.

Besides, the French elections and (low, but still) uncertainty are factors that heavily impact the EUR/USD exchange rate at this time in a more or less random way. Therefore, any technical developments such as breakouts or breakdowns should not be viewed as important and binding until a reliable confirmation is seen. For now, the analogy to the 2002 – 2003 decline remains intact.

We had discussed the above-mentioned analogy several months ago in our Gold Trading Alerts, but if you haven’t had the chance to read it, the following quote should make things clearer:

The (…) self-similar pattern that we can see above is the mirror nature of the 2009 – now bull market and the pre-2009 bear market. The move below 100 in 2003 was corrected only once and in a rather sharp way. After the correction, the decline resumed and continued until the level of 92 was reached. The pre-correction (which was about 4 index points – just like the current one at this time) decline in the USD Index started a bit above 108.

Back in 2016, the USD Index rallied from about 92 to about 104 and corrected about 4 index points in a rather sharp (from the long-term point of view) manner. If the history rhymes and the “reflection” continues, the USD Index is about to quickly rally to the 108 level or slightly higher (adding the size of the 2015 – 2016 correction to the 2015 highs provides us with 110 as the target).

What are the implications of the above? Naturally, they are bearish for gold and the rest of the precious metals sectors and there are 2 direct reasons for it:

Even if we didn’t pay attention to the reflective nature of the USD Index, its medium-term outlook would still be bullish.

The key fundamental reason is the situation in interest rates – they are moving higher in the U.S., while the rest of the world (here: the key currencies in the USD Index: the euro and the yen) is still in favor of dovish monetary policy and it doesn’t seem likely that this is going to change anytime soon. The key technical fact is the USD’s breakout above the 2015 highs and the verification thereof (even though USD is now a bit below them).

What about the short-term indications?

The True Seasonal tendencies for the USD Index heavily favor a bottom in late April / early May. As the uncertainty regarding the French elections likely peaked right before them, the bottom may have already formed and higher prices are likely to follow in tune with seasonal patterns. The implications are bullish for the USD Index and bearish for the precious metals sector.

The medium-term trends in gold are reflected by the medium-term trends in the USD Index and that’s been the case for many years. Naturally, there are deviations from this rule, but generally, it has to be the case simply because gold is priced in the US dollar. Consequently, it is very important for precious metals investors and traders to monitor the USD Index as signs of bottoms likely indicate lower prices for PMs in the following weeks.

In our Friday’s alert, we wrote the following:

First of all, saying that gold was the last to break below its support line is another way of saying that it didn’t initiate a breakdown in the precious metals sector – it confirmed it. The initial breakdown took place in silver and mining stocks and since now the entire trio: gold, silver and miners are after a breakdown, the implications are most bearish.

Now, some may say that the breakdown in gold is not yet confirmed and thus that it really doesn’t count. There is some truth to it, however, since gold was the last to break lower, the implications are somewhat bearish anyway, and – most importantly – the breakdown was actually verified, in a way. The confirmation (which is necessary to determine if a move is accidental / triggered artificially or a real one that truly represents market participants’ views) can come from several things – 3 consecutive closes below a certain level, big size of the move, big size of the volume and – at times – from a weekly close below a certain level. The week is not over yet, but the move in gold was accompanied by big volume, so it was already somewhat confirmed. If gold closes today’s session (and, at the same time, the whole week) below the rising red support line ($1,242), the breakdown will be completely confirmed in our view.

Gold indeed managed to close the week below the rising support line, which indicates that lower prices of the yellow metal are to be expected. Naturally, the bearish implications extend to the rest of the precious metals sector as well.

Summing up, the outlook for the USD Index remains bullish and the implications are bearish for the precious metals market. Naturally, the above could change in the coming days and we’ll keep our subscribers informed, but that’s what appears likely based on the data that we have right now. If you enjoyed reading our analysis, we encourage you to subscribe to our daily Gold & Silver Trading Alerts.