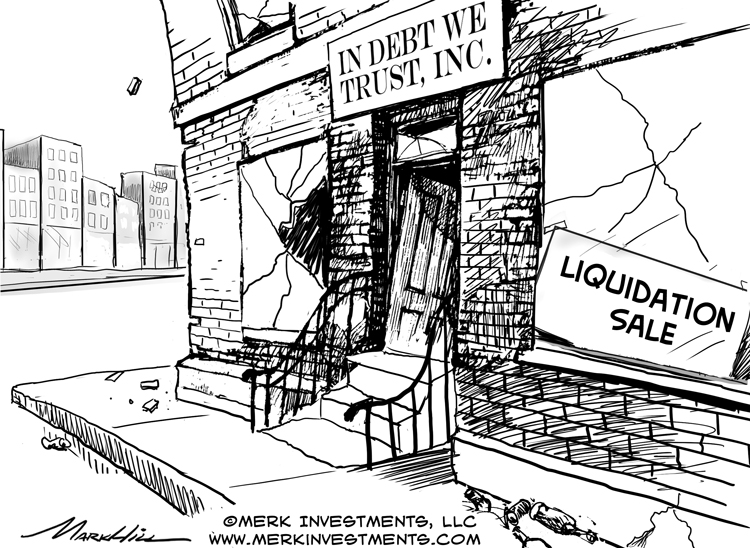 If the road to hell is paved with good intentions, American’s exorbitant privilege might be at risk with broad implications for the U.S. dollar and investors’ portfolios. Let me explain. The U.S. was the anchor of the Bretton Woods agreement that collapsed when former President Nixon ended the dollar’s convertibility into gold in 1971. Yet even when off the remnants of the gold standard, the U.S. has continued to be the currency in which many countries hold their foreign reserves. Why is that, what are the benefits and what are the implications if this were under threat?

Let me say at the outset that the explanation I most frequently hear as to why the U.S. dollar is the world’s reserve currency – “it is because of tradition” – which is in my opinion not a convincing argument. Tradition only gets you so far – it ought to be policies and their implementation that guide investors.

“The term exorbitant privilege refers to the alleged benefit the United States has due to its own currency (i.e., the US dollar) being the international reserve currency.[..]

Academically, the exorbitant privilege literature analyzes [..] the income puzzle [which] consists of the fact that despite a deeply negative net international investment position [NIIP], the U.S. income balance is positive, i.e. despite having much more liabilities than assets, earned income is higher than interest expenses.”

In the context of today’s discussion, I would like to focus on what I believe may be the most under-appreciated yet possibly most important aspect of the so-called exorbitant privilege: what makes the U.S. so unique is that it is de facto acting as the world’s bank. A bank takes on (short-term) deposits and lends long-term, capturing the interest rate differential.

Applied to the U.S. as a country, investors borrow cheaply in the U.S., and seek higher returns by investing in the rest of the world. In the investment world, we also refer to this as carry, i.e. one might say the U.S. engages in an amazing carry trade. As long as this ‘carry trade’ works, it is quite a charm. That said, there are those who are concerned that the party cannot last forever. To quote from our own past writings, the former head of the European Central bank Wim Duisenberg said in 2003: ‘We hope and pray the global adjustment process will be slow and gradual.” — In fact, a reference to a “disorderly adjustment of global imbalances” was a risk cited by the ECB every month in its statement until about the time current head, Draghi, took over. This “adjustment process” is a thinly veiled reference to a potential dollar crash.’

So is there reason to believe the U.S. may no longer be serving as the world’s bank? At first blush, the answer would be no, as the U.S. has deep and mature financial markets. However, there are developments of concern:

If corporate America can no longer deduct net interest expense, we believe it will make the use of debt less attractive. It would discourage the use of leverage. Banks use a lot of leverage. And, as we are pointing out, one can look at the U.S. as a whole as if it were a bank. A system with less leverage may well be more stable; however, a system that uses less leverage may also have less growth.

From the point of view of America’s exorbitant privilege, the key question in our view is how the world reacts. A plausible scenario to us is that American CFOs will move leverage to overseas entities where interest continues to be deductible. Similarly, to the extent that foreign issuers in the U.S. used U.S. legal entities to raise money, they would likely raise funds through foreign entities where interest expense would still be deductible. The question then becomes whether the money raised from these (newly minted) foreign entities would be in U.S. dollar or in foreign currency. If they raise money in foreign currency, the U.S. dollar would be cut out as the “middleman,” jeopardizing American exorbitant privilege.

If you take a U.S. firm, if they decide to use foreign subsidiaries to issue debt, they might want to also report more revenue overseas to make it worthwhile to deduct more. CFOs are highly paid, in part we believe, because of their ability to engineer where to recognize revenue and expenses. We would expect CFOs to rationally optimize shareholder value in the context of the regulatory and tax framework they are presented with. Once you take the step of recognizing more revenue abroad, it would only be prudent to match the liability, i.e. the interest expense, in the same currency.

But won’t the U.S. be a more attractive place to invest if the entire GOP tax plan gets passed? What about if the U.S. changes to a territorial tax system? What about the border adjustment tax (or a variant thereof)?

There’s still one more component: a U.S. government that needs to issue a lot of debt to fund its budget deficits. To the extent that foreign governments have less of a need to hold U.S. dollar reserves, funding costs for the U.S. government might rise. While some may believe higher borrowing costs might be a positive for the dollar, the opposite may be true if the Federal Reserve has to keep rates artificially low to prop up an economy that would otherwise deflate; or because government deficits would otherwise be unsustainable. The point being here that the U.S. dollar might become more vulnerable should fiscal and monetary policy not be sound…

In summary, providing a disincentive for debt might make the world more stable, but lead to lower growth. It might encourage more issuance of debt in local currency, something that might also be healthy for global stability, but might leave the U.S. and the greenback behind.

To expand on the discussion, please register for our upcoming Webinar entitled ‘Trump or Dump Gold?’ on Thursday, February 16, to continue the discussion. Also make sure you subscribe to our free Merk Insights, if you haven’t already done so, and follow me at twitter.com/AxelMerk. If you believe this analysis might be of value to your friends, please share it with them.