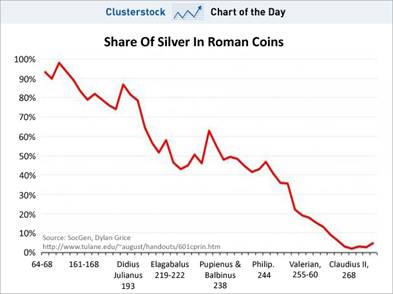 “Debasement was limited at first to one’s own territory. It was then found that one could do better by taking bad coins across the border of neighboring municipalities and exchanging them for good with ignorant common people, bringing back the good coins and debasing them again. More and more mints were established. Debasement accelerated in hyper-fashion until a halt was called after the subsidiary coins became practically worthless, and children played with them in the street, much as recounted in Leo Tolstoy’s short story, Ivan the Fool.” – Charles P. Kindleberger – Manias, Panics, and Crashes

The Holy Roman Empire debased their currency in the early 1600s the old fashioned way, by replacing good coins with bad coins. Any similarities with the U.S. issuing pennies that cost 2.4 cents to produce and nickels that cost 11 cents to produce is purely coincidental. I wonder what the ancient Greeks would think of our Olympic gold medals that contain 1.34% gold. The authorities have become much more sophisticated in the last one hundred years. Digital dollars are so much easier to debase. The hundred year central banker scientifically manufactured bust relentlessly plods towards its ultimate conclusion – the dollar reaching its intrinsic value of zero. “It is well enough that people of the nation do not understand our banking and monetary system, for if they did, I believe there would be a revolution before tomorrow morning.” – Henry Ford

Henry Ford made this statement decades before the debasement of our currency entered overdrive. The facts reflected in the chart above should have provoked a revolution, but the ruling class has done a magnificent job of ensuring the mathematical ignorance of the masses through government education, mass media propaganda, and statistical manipulation of inflation data to obscure the truth. Mainstream economists have successfully convinced the average American that inflation is good for their lives and deflation is dangerous to their wellbeing. There are economists like Kindleberger, Shiller and Roubini who have brilliantly documented and predicted various bubbles, despite being scorned a ridiculed by the captured mouthpieces for the oligarchs. But even these fine men have a flaw in their thinking. They can see speculative manias spurred by irrational beliefs and delusional thinking, but are blind to the evil manipulations of bankers, politicians, and corporate titans. They believe that humans with Ivy League educations can outsmart markets and through the fine tuning of interest rates, manipulation of the money supply and provision of liquidity through a lender of last resort, can control the financial system and avoid panics.