US Dollar at 2010 Highs: Reasons for a Correction

Posted by Short Side of Long 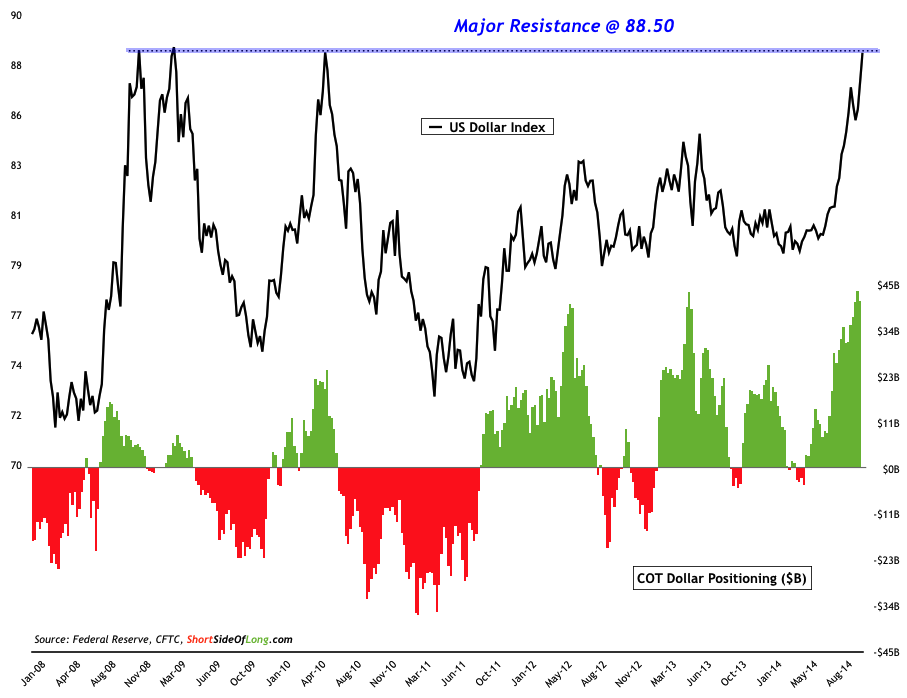 US Dollar Could Correct

Since the start of the Northern Hemisphere summer, a major theme within the global financial market movements has been the strength in the United States Dollar. Being a global reserve currency, a rise in the greenback tends to have major implications for the rest of the world. In recent months we’ve seen weakness in shares around the world, we’ve seen commodities dropping like a rock and we’ve seen global currencies under heavy pressure. Majority of these assets have now become oversold from the short term perspective, especially Precious Metals discussed on the blog in yesterdays post (if you haven’t read it yet, click here).

Chart 1: Hedge funds & other speculators are all on one side of the boat Source: Short Side of Long

US Dollar Index has gone up almost vertically, with major catalysts being divergence in monetary policies by major central banks. Federal Reserve has ended its recent round of Quantitate Easing, while European Central Bank is just starting its QE engine and Bank of Japan continues to remind the market that they will “print unlimited amounts of money”.

Price wise, we now have the Dollar Index reaching tis major resistance zone around 88.50. These levels were major selling points during the Global Financial Crisis of 2008 and the Eurozone Crisis and Greek Bailout in 2010. All of this is occurring while hedge fund positioning reaches net long extremes, as everyone is now on one side of the boat (refer to Chart 1). Simultaneously, confirming this outlooking is variety of sentiment surveys showing that just about everyone is a bull on the King Dollar (refer to Chart 2). Source: SentimenTrader (edited by Short Side of Long)

So with the Dollar being a favourite currency of global investors, just as equally the opposite side of that trade has very much suffered. Various inflation assets such as Euro, Crude Oil or Silver (just to name a few) have been beaten down within the same time frame. Therefore, it should not be a surprise that these assets have now reached major support zones (refer to Charts 3, 4 & 5), on extreme oversold conditions. As just as the Dollar happens to be everyones favourite investment right now, sentiment on these assets is negative with investors liquidating and running for the hills.

You shouldn’t positioning yourself based on what I think in this article. The bottom line for me is that I remain fully hedged in Silver, continue to hold naked short positions on Gold (giving my a net short PMs exposure) and remain in US Dollars for all my cash holdings. If you have been following the blog and the newsletter, you would have noticed that I opened these positions in July of this year.

While I am not yet closing these positions (I expect more Dollar strength next year), if I was a short term trader, I would be careful of a counter trend to occur for awhile. There are a huge number of Dollar bulls and a shake out could occur at anytime. In this case scenario US Dollar would correct and various stock markets (especially EU & GEMs), commodities and foreign currencies would rebound.