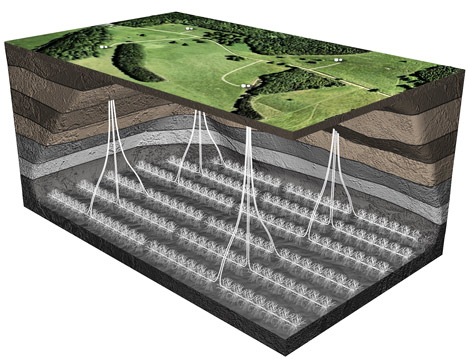 In a 23 October report entitled “North America leads the world in production of shale gas” the EIA reports, “The United States and Canada are the only major producers of commercially viable natural gas from shale formations in the world, even though about a dozen other countries have conducted exploratory test wells” and that China is the only nation outside of North America that has registered commercially viable production of shale gas, although the volumes contribute less than 1 percent of the total natural gas production in that country. In comparison, shale gas as a share of total natural gas production in 2012 was 39 percent in the United States and 15 percent in Canada.

This is not the whole global story, however.

According to the “Technically Recoverable Shale Oil and Shale Gas Resources: An Assessment of 137 Shale Formations in 41 Countries Outside the United States” analysis prepared by Advanced Resources International for the EIA, in comparison with 2011 figures, 41 countries were now assessed to have recoverable shale gas reserves, up from 32 two years ago. The number of basins with recoverable shale reserves increased from 41 in 2011 to 48 in 2013, and the number of formations containing shale gas nearly doubled in the same time period, from 69 in 2011 to 137 in 2013. Worldwide, estimates of “technically recoverable resources” of shale gas also increased, from 6,622 trillion cubic feet in 2011 to 7,299 tcf two years later. Shale/”tight oil” estimates also rose, more than 1,000 percent, from 32 billion barrels in 2011 to an impressive 345 bb.

Another fascinating statistic from the study is its ranking of the “Top 10 countries with technically recoverable shale oil resources.” While the U.S. is first in extraction, the report ranks the Russian Federation in reserves, with 75 billion barrels of technically recoverable shale oil. The U.S. is number two, with 58 bb. China is number 3, with 32 bb, Argentina number 4 with 27 bb, Libya number 5 with 26 bb, Australia number six with 18 bb, leaving Venezuela and Mexico tied for seventh with 13 bb apiece and Pakistan and Canada tied for eighth place, with 9 bb apiece.

A number of interesting conclusions flow from the above information.

First, five of the top shale gas reserves are in the Western Hemisphere – the U.S. Argentina, Venezuela, Mexico and Canada, but only two of them, the U.S. and Canada, have aggressively moved to exploit them.

Secondly, conspicuously absent are Middle Eastern countries Saudi Arabia and Iran, where hydrocarbon information is regarded as a state secret. Iraq is also absent. Energy poor Pakistan and energy power Libya have shale gas reserves, but neither the money nor the technology to exploit them.

In the Pacific, Australia is doing nicely from its coal exports, and is looking towards ramping up its liquefied natural gas exports.

Canada, while having relatively modest shale gas reserves, nevertheless is only trailing the U.S. in their exploitation.

…leaving as wild cards energy superpower Russia and energy starved China, both as yet minors players in the shale gas revolution.

OilPrice.com is the fastest growing energy news site online. Our analysis focuses on Oil and Gas, Alternative Energy and Geopolitics. We have 3 in house writers and publish research from over 150 contributors.

OilPrice works with over 250 syndication partners who re-publish our analysis. Some of our partners are: Zerohedge, Business Insider, Forbes, 24/7 Wall St, Arab News, The Street, Rigzone, Mining.com, Mineweb, Minyanville, Stockhouse + many others…