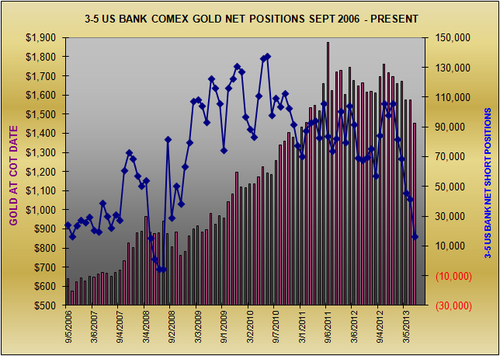 We thought we would share with our readership an important change in the positioning of large U.S. banks in the monthly futures-only Bank Participation Report(BPR) issued by the Commodity Futures Trading Commission (CFTC). The most recent report was published Friday, May 10 for positions as of the close on Tuesday, May 7.

The main reason we are going to the trouble of doing this short report is that there is a surprising dearth of accurate information about the new data available on the Web.

One of our members forwarded to us some coverage by others which we found utterly useless and inaccurate (showing a preconceived bias on the part of the author), so perhaps this report will provide some clarity for those who closely follow the CFTC commitments of traders reports as well as the positioning of banks in futures.

Let’s start this review with our comments shared with GGR Subscribers on Sunday, May 12. After mentioning that the combined commercial traders – the Big Hedgers, which includes the U.S. banks in the Legacy COT reports – had reduced their collective net short positioning for gold to the lowest since the 2008 panic and at a “very fast pace,” we said:

“An aggressive pace of LCNS reduction with none more aggressive than U.S. banks. The Bank Participation Report (not to be confused with the weekly Legacy COT report, which is separate) shows that over the past month U.S. banks covered or offset a whopping 24,855 (60%) of their net shorts (from 41,666 to just 16,781 contracts net short). The number of U.S. banks reporting falls below 4, a tell. We have not seen the U.S. banks show so low a net short position since they briefly went slightly net long in the summer of 2008 during the panic.”

In fact, in that June 2008 report the U.S. banks were actually net long gold then by 5,381 lots. (But as the graph below clearly shows they would not stay net long. By the next monthly report in July they had put on an amazing 82,228 contracts net short in just one month.)

Below is a graph showing the nominal net short positioning reported by U.S. banks to show it visually. The net effect is clear to see in the graph above on a nominal basis. As gold fell down to test the $1,300s U.S. banks very strongly reduced their collective net short positioning and came within a whisker of becoming actually net long for the first time since the 2008 panic.

To standardize the results and show that there are no material anomalies in the data above, we compare the U.S. banks’ nominal net position with the total COMEX open interest in the graph below. From December 4 to last Tuesday, May 7, as gold fell from near $1,700 to as low as $1,321 before settling at $1,452, the U.S. banks’ net short positioning fell from a significant 24.5% to a miniscule 3.8% of all COMEX contracts open . Clearly the U.S. banks, presumably including U.S. bullion banks, are not, that’s not, positioning as though they believe there is a great deal more downside left in gold futures.

If they did or do believe that gold could probe even lower than the $1,320s, they are not positioning for it in COMEX futures. That does not necessarily mean they are “right,” but it is a window into how the largest, best funded and presumably the best informed traders of gold futures on the planet – the U.S. banks – are positioning, both for their own book and for their clients.*

It is rare to see the U.S. banks put on 21,000 or more long contracts in a month.** We have to believe that the U.S. banks would not have done that unless they meant to reduce their collective net short positioning in a relative hurry.

* The U.S. bullion banks trade for their own account and for clients, which include a broad cross section of businesses in the gold trade (large bullion dealers, large holders of physical metal, jewelry merchants and manufacturers, producers, some refiners, bullion management firms and other middlemen, etc.).

** This is the largest increase in our records going back to 2006. Before this report the largest one month increase in U.S. bank longs was with the September 2, 2008 report, when the U.S. banks reported adding 17,567 lots with gold then about $805. By the following report, on October 7, gold had moved 9% higher to the $880s.