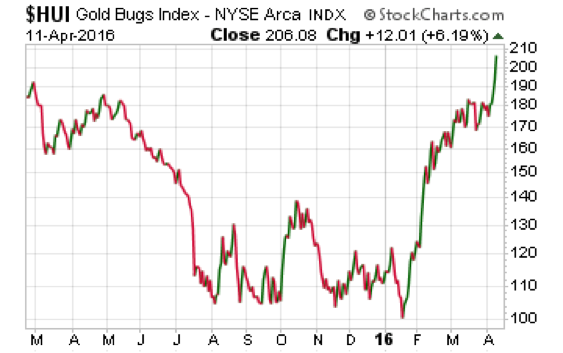 Spring has sprung for precious metals mining stocks.The HUI gold stocks index surged 6.2% on Monday to close at a 14-month high. The HUI chart shows a strong base was built from last summer through this January, and from that base a new bull market has begun. (For the April 13th chart look HERE – M/T Ed) Industry major Barrick Gold (ABX) has seen its share price more than double year to date, leading precious metals mining equities as a group to become by far the top performing sector of 2016. As the bull market matures, we can expect leadership to switch from the majors to the mid-tier producers, then on down to the junior explorers.

Eventually, the stocks will get ahead of their underlying fundamentals, as is always the case in momentum-driven markets. Investors will then find greater value and stability in the physical metals. Physical precious metals will at some point take center stage and outperform the miners.

For now, the miners are taking the lead and blazing a path higher for the metals markets.Gold mining stocks often serve as a leading indicator for gold prices.

Of course, on any given day, the share prices of miners can move based on business or market peculiarities that are wholly unrelated to spot gold. But when gold equities trend upward in a significant way, as they have so far this year, we can infer that some big-money investors are betting on a big recovery in gold prices. It’s the gold price, after all, that is the biggest factor in most miners’ prospects for realizing profits.

But it would be a huge mistake for investors to treat gold/silver mining, streaming, and exploration companies as if they were proxies for the metals themselves. Physical precious metals are an entirely separate asset class. A gold or silver coin can’t go bankrupt. A mining company can go bust for any number of reasons – poor management, an environmental disaster, a credit crisis, etc. Money Metals columnist David Smith has detailed all the risks for our readers.

Historically, investors in mining companies have suffered through extreme booms and busts with little on net to show for the punishment they’ve endured.In fact, gold stocks have vastly underperformed gold spot prices over the past couple decades. Gold prices trade more than three times higher today than they did 20 years ago. Yet the HUI, despite its recent run up, actually trades slightly lower today than it did back in April 1996.

Those who bought gold stocks as a proxy for gold learned a tough lesson. During favorable up cycles for gold mining equities, they can potentially deliver outsized gains compared to gold itself. But during unfavorable periods, the downside for the stocks is much more severe than it is for the bullion.

Only the metal itself has a long-term track record of maintaining purchasing power.

Only precious metals in physical form are money.

Only gold, silver, and other hard assets serve as hedges against the risks inherent in the financial system.

That’s not to say that mining stocks don’t have a place in a diversified investment portfolio. They can certainly deliver big returns when market conditions are favorable.Some of the majors, such as Barrick, Goldcorp (GG), and Newmont (NEM), even pay small dividends.

But do you buy into mining stocks now, after a lot of these names have already doubled off their lows, given the sector’s track record of producing more disappointment than profits? It’s a question you as an investor will have to answer for yourself, taking into consideration your own objectives and risk tolerance.

If you’re looking for an undervalued investment that has similar upside potential as mining stocks but less downside risk, plus all the attributes of a tangible attributes of a hard asset, then consider physical silver.

The silver market appears to be gaining momentum, but spot prices remain well below their highs from last year.The gold:silver price ratio remains elevated at 79:1. As recently as 2011, gold sold for 32 times the price of silver, and historically it has often sold for 16 times or even as low as 10 times the silver price.

What will cause the spread between gold and silver to narrow? Most likely a big move upward in silver prices.The silver market opened this morning just above $16.00/oz, surpassing its high mark for the year.After being compressed for many months within a trading range, the silver market now sits like a coiled spring on the verge of breaking out. Opportunities to buy major breakouts into new bull markets don’t come along often. If you regret missing the big rally this year in the miners, now’s your chance to catch the better part of what could be an equally impressive follow-up bull run in silver.

Stefan Gleason is President of Money Metals Exchange, the national precious metals company named 2015 “Dealer of the Year” in the United States by an independent global ratings group. A graduate of the University of Florida, Gleason is a seasoned business leader, investor, political strategist, and grassroots activist. Gleason has frequently appeared on national television networks such as CNN, FoxNews, and CNBC, and his writings have appeared in hundreds of publications such as the Wall Street Journal, TheStreet.com, Seeking Alpha, Detroit News, Washington Times, and National Review.