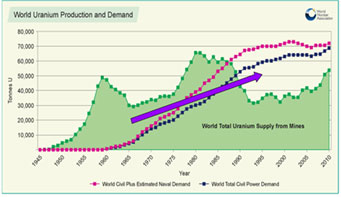 Today there are no fewer than 60 nuclear plants under construction in 14 countries, with another 163 planned and 329 proposed.

Many countries without nuclear power are on the cusp of building their first reactors, including Vietnam, Turkey, Indonesia, Egypt, Kazakhstan, and several among the Gulf emirates. And while many countries with nuclear reactors took a moment to pause and reassess safety standards in light of the Fukushima disaster, almost all have reasserted their support for nuclear power as a major component of their energy strategies. Uranium is simply the only fuel right now that can reliably produce large amounts of electricity without the release of greenhouse gases and other hydrocarbon pollutants.

Demand is clearly ramping up, and the world is already short on uranium. In 2011, world industry consumed 165 million pounds of U3O8 but produced only 143 million pounds.

Secondary supplies have been filling the gap to date. For example, since 1993 the Megatons-to-Megawatts agreement between Russia and the United States has been working toward the goal to recycle 500 tonnes of highly enriched uranium (HEU) from Russian nuclear weapons into the LEU that reactors use to produce electricity. But remember, that deal is set to end next year.

The end of Megatons-to-Megawatts will eliminate 24 million pounds of uranium supply just as demand starts surging. The World Nuclear Association predicted global uranium demand will have increased 33% by 2020, and will then climb almost that much again in the next 10 years.

If every potential uranium mine on the horizon were approved, built, and commissioned on schedule, supplies might just keep up with demand. But current uranium prices are rendering many potential mines uneconomic, and global economic uncertainty is making it very difficult for uranium companies to obtain the cash they need to build mines. It all adds up to one conclusion: a supply gap is looming.