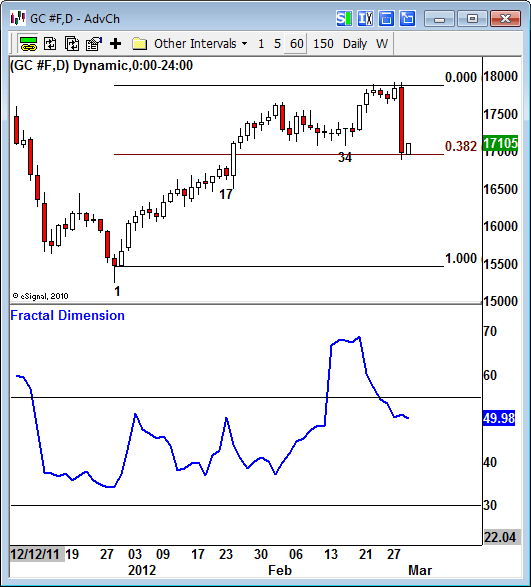 Peter Grandich “This an opportunity for those not yet fully invested in gold and silver. Last call! Train to pull out of the station on the way to new highs by summertime”………..   Mark Leibovit –   “The bottom line here is we will still see a big move to the upside because we have a tight physical market and that’s going to cause the price to explode higher.”

GOLD – ACTION ALERT – BUY  – Written 3/01/2012 by Mark Leibovit
Perhaps I had a sixth sense that something may be ‘rotten in Denmark’ when I wrote yesterday morning: “Though I am on a BUY signal, remember, chasing any market is not a wise financial practice. If you have been slowly accumulating positions all along (at all levels), there is less stress in trying to ‘catch up’ and chase prices when they are rising. The ‘boys’ have the power to pull the plug at any time. We learned that last year. I suspect the ‘big’ players (hedge funds) are also part and parcel to the current upside action. When they change their mind, watch out. I suppose NOT seeing gold and silver into new record highs this year might act as such a catalyst on their part.”

Gold prices were selling off Wednesday after Federal Reserve Chairman Ben Bernanke indicated that an additional round of quantitative easing was becoming increasingly unlikely. We experienced a ‘flash-crash’ type scenario yesterday. Short-term, a ‘Key Reversal’ and Negative Leibovit Volume Reversal patterns on some daily and weekly charts. At the worst levels, spot gold declined $106.00 measuring from Tuesday’s 1792.40 high to yesterday’s 1686.40 low. Silver declined from the morning high of 37.62 to 33.88 or $3.74.
Central planners can’t announce they are going to have constant and massive QE or everything would go to the moon. So the idea is floated around that QE3 is off the table. If gold and silver are going to head a lot higher from here, this is what you would expect the manipulators to do ahead of that move to make sure as few people as possible are on the long side. The bottom line here is we will still see a big move to the upside because we have a tight physical market and that’s going to cause the price to explode higher.

Seasonals warn of a top at the end of February for Gold and an equivalent top by mid May, so much of this may be just a cyclical phenomenon regardless of Bernanke. That said, technicals rule and until we clear highs from earlier today and/or Positive Leibovit Volume Reversals are formed, some caution needs to be exercised if you’re trading. I am in the camp that any washout (including this one) is a buying opportunity, so I remain on my BUY signal. That said, picking the exact bottom of such events is more of an art than a science – so I cannot provide you a precise downside target for this correction. Indeed, we could have seen the lows yesterday. If you believe as I do that silver is headed into triple digits (maybe high triple digits) and gold could see $11,000 an ounce in the current decade, any washout is an opportunity to do some buying.

For details the Leibovit VR Gold Letter (www.vrgoldletter.com) and the VR Forecaster (Annual Forecast Model) report which is now available at: https://www.vrtrader.com/subscribe/index.asp

After Gold’s No-QE3 Plunge, Market Clear For Another Rally

“What caused such a violent drop?  Evidence points to Fed Chairman Ben Bernanke’s omissions regarding further easing, and QE3 specifically, in Wednesday’s Congressional testimony.  Dennis Gartman and UBS’ Edel Tully agree on that, and so does the price chart. “

I see gold close near $1700 and silver under $35. I am travelling back from vacation in Florida and consider this an opportunity for those not yet fully invested in gold and silver. Last call! Train to pull out of the station on the way to new highs by summertime. Peter Grandich Written 02/29/12 Grandich.com

One of the really interesting things about Wednesday was how the carnage was for the most part limited to gold and silver. Other markets saw an uptick in volatility, and some scattered selling, but really nothing close to gold. Even oil came down for a 38.2% retracement and bounced right back up, and stocks didn’t really do all that much.

So what the heck happened?

It seems hard to believe, but gold did a 38.2% retracement of the entire move off the bottom in just one trading day, and almost right to the tick. Such a super-intense retracement can still be part of a bullish pattern — in fact, if the market survives such a test, this sort of hard retracement can become the impetus for a giant rebound, and a trending move that extends for weeks. Silver also completed a to-the-tick 38.2% retracement of its full move off the bottom. So even though it didn’t remotely resemble anything bullish, this type of sell-off can still be considered part of an ongoing bullish pattern, in both gold and silver. The problem is the size and scope of the moves in precious metals right now, as these patterns are not exactly unfolding on a “user-friendly” scale. It’s crazy out there, and that’s not likely to change anytime soon.

In fact, this set-up reminds me of another Bernanke-inspired sell-off about a year ago that was the direct precursor to 14% rally over the ensuing 6 weeks. An equivalent rally from here will take gold back to the all-time highs around $1,920. But I think this could actually be the set-up for a bigger rally up to the $2,100 target area. A very hard 38.2% retracement typically triggers an even bigger response in the direction of the trend. And I can’t recall ever seeing a harder 38.2% retracement.

So it’s alarming to see gold plunge like this, but it’s definitely not over yet for this emerging pattern. However, the bullish case will suffer a major set-back, at least in the short-term, if gold sinks below $1,690 and can’t get right back over.

But if gold holds here, and especially it if quickly rebounds over $1,733, then the bullish pattern should be stronger than ever. In fact, this could be a perfect set-up for options, futures, and leveraged positions, as a market that survives and rebounds after a hard retracement will often see relentless upside pressure for weeks.

Fractal Editor’s Note: 38.2% retracements are the building blocks of every single trending move in markets, and the closest thing to a “market law” that will ever be characterized.  This is because the 38.2% retracement is a component of the golden logarithmic spiral, which is based on the golden ratio and the Fibonacci series.  The golden spiral is a foundational pattern for financial markets, as it is a universal shape that is infinitely scalable in both directions, both outwards and inward, which is a necessary characteristic for fractal systems like markets.