Posted by Bill Bonner: Diary of a Rogue Economist 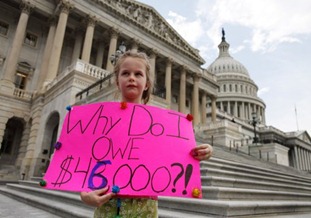 Dad is still without power on the ranch. He’s working on restoring the solar panels. But he’s still out of reach.

So instead of his regular Diary entry, here is Part II of his essay to members of his family wealth preservation advisory Bonner & Partners Private Wealth. (To find out more, read this.)

Thomas Jefferson was familiar with debt. He carried a substantial burden of it throughout his adult life.

At the time, there were no bankruptcy protection laws. If you did not pay your debts, your creditors hounded you… could take everything from you… and get you sent to jail.

Jefferson had such a reputation that his creditors were perhaps awed by it… or sympathetic. They did not push him too hard. Otherwise, he might have been ruined. Or even put in prison for non-payment of debt.

There he might have joined his fellow Declaration of Independence signatory James Wilson.

Wilson was put in prison for non-payment while serving as Associate Justice of the U.S. Supreme Court. There too, in the Walnut Street Debtors’ Prison, in Washington, D.C., he might have encountered his old friend Robert Morris, also a signatory of the Declaration of Independence. Morris was once one of the richest men in the colonies and was described as “the most powerful man in America.” From 1781 to 1784, he acted as the new nation’s secretary of the

Treasury — as its “Superintendent of Finance.” But he was bankrupted in the Panic of 1796 and sent to debtors’ prison.

Another illustrious veteran of debtors’ prison was Henry “Light-Horse Harry” Lee, father of Robert E. Lee. He was a hero of the Revolutionary War, but nevertheless busted and sent to prison in 1808. He used his time there to write his Memoirs of the War.

Throughout history, excessive debt has been a great danger — with serious consequences for the unwary. There were heavy penalties for not satisfying your debts. In Ancient Greece, for example, the debtor could be taken into “debt bondage.” He was made a slave.

So many people became enslaved in this way that Athenian statesman Solon enacted a law in about 600 B.C. that banned the practice. Called the seisachtheia, it allowed the debt slaves to return to their farms as free men. But the debt was not erased. The debtor was still at risk of becoming his creditor’s slave if he failed to respect the new credit terms.

The penalty for failure to pay debts in Europe during the Middle Ages was prison. Conditions were appalling, as you might imagine. Typically, the debtor’s family had to continue providing food and clothing. If the prisoner had no family support he would starve. In prison, of course, he had little means to repay the debt, which commonly brought the story to a miserable conclusion.

Going broke was also an abominable disgrace. It was a blemish on a family escutcheon, telling the world that a member of the family — often the head of it — had let down his friends and associates. Read the novels of Thackeray and James; you will find young women of good society who can’t get married — ever — because their fathers defaulted on their financial obligations. Non-payment of debt sullied the family — for generations. To avoid this stain, uncles, cousins and other would come together to discharge the debtor’s obligation.

The penalties of excessive debt also figured heavily in commercial relations — especially in the banking industry. Until the creation of the Federal Reserve System in 1913… and the later Depression Era reforms that allowed banks to operate behind a corporate shield… bank owners were personally responsible for their bank’s losses. There was no federal deposit insurance and no private banking cartel that could come up with funny money when it was needed.

Money was real — expressed as a unit of gold. Losing it meant real losses. Failed banks went into receivership. The receiver would tally up the losses and send a bill to the owners. Each paid his share of the losses… or he would be judged insolvent too.

As you can imagine, bankers were a lot more prudent back then. So were borrowers. Both shared a keen interest in not overdoing it. Because both were directly exposed to penalties if anything went wrong! There was a direct connection between the debtor and his suffering — whether or not he operated behind the big brass door of a bank or the flimsy wooden door of a tenement apartment.

Who cares? Someone else pays the penalty… sooner or later!

Bankruptcy protection laws now permit debtors to continue to live normal lives, as their accounts are brought back into balance by court order. The modern debtor is usually allowed to keep the family home… provided it is not too extravagant… and enough of his earnings to allow him to carry on. Otherwise, his assets are seized and distributed among his creditors.

But public debt is another matter. Never before in history have we seen anything like it. A young man in the 19th century might inherit his father’s debts (along with his assets); he now inherits debts incurred by people completely unrelated to him.

An old man in Arizona gets free pills from the government in 2010; a young man in Maine will still be paying for them in 2030. A middle-aged banker pays himself a $10 million bonus in 2011 thanks to EZ money from the Fed; a plumber just starting out in 2025 wonders why his own money is worth so little. Washington goes $7 trillion further into debt in 2012; some hapless college grad 10 years from now finds he can’t get a job.

Calculated by Professor Lawrence Kotlikoff of Boston University, your grandson’s share of the total U.S. government debt burden is about $700,000. This is not a fiction. It is real. And as the baby boomer generation retires and grows old, this obligation will come due and payable.

It would cost your grandson about $20,000 a year, over a 40-year career, to discharge it. And that assumes that the government immediately stops adding to it. This young man will probably pay about 40% of his income just to keep the feds current on spending. On earnings of $50,000 a year, he would pay another 40% for the benefits his parents and grandparents consumed many years before.

We have yet to meet the young man or woman who would stand for this. None would. No government would dare impose it. And the markets would get the heebie-jeebies and collapse long before it came to pass.

Instead, what will really happen was outlined in last week’s Outlook. The feds will delay serious budgetary reforms as long as possible. They will raise taxes here and there. They will postpone spending cuts. The can will be kicked — and booted — so many times that it will be battered and bumped into an unrecognizable shape when it finally comes to rest against a brick wall. That will be the brick wall against which the feds will have their backs when all hell breaks loose.

Prices will begin to rise. Investors, fearing inflation, will sell U.S. Treasury debt. The feds will have only two choices: raise interest rates to stifle inflation (thereby protecting the dollar and the bond market) or print money to cover deficits (thereby protecting their jobs and benefit consumers). The first choice will mean recession, maybe depression, and possibly riots and looting. The second will mean hyperinflation.

This wall is out there. Where exactly this wall is, no one knows. I have been surprised by the example of Japan. The country has been racing toward its own brick wall for more than a decade. Shinzo Abe, the incoming prime minister, has promised to speed up! But so far investors and savers still consent to transferring more and more of their money to the government in return for IOUs (Japanese government bonds) that can’t possibly be paid off. They too must collapse… sooner or later.

A Lot of Ruin

The U.S. has “a lot of ruin in it” too, to borrow an expression from Keynes. How much? I don’t know. But it is certainly doing its best to find out. And it will be a costly lesson.

Succeeding generations (probably the next) will bear the costs of the debt. This will likely come in the form of a disastrous period of financial whammies… crashes… bear markets… and hyperinflation. They will also bear the cost of living and working in a debt-saturated zombie economy (one that is essentially moribund but that appears alive).

From a distance — or from the figures provided by the U.S. government — you might think the U.S. economy is “recovering” from a serious ailment. But if you hold a mirror up to its nose, you will not see much fog. Hold its wrist. The pulse will be hard to detect.

The false impression is primarily the result of faulty reporting. Real employment and inflation measures are distorted by changes to the system put in place at the Bureau of Labor Statistics. According to John Williams of ShadowStats.com, properly measured, the numbers would show the U.S. economy now in its seventh year of recession… with a 20% real unemployment rate. That is to say we are living through a depression, and young people are bearing most of the pain.

The young will also bear the brunt of the feds’ clumsy efforts to repair the system. Government is always reactionary — favoring existing capital interests over those of the (non-voting) future. But never before in a “free market” economy have governments so vigorously defended the past at the future’s expense.

In short, the young are today’s debt slaves. But unlike the debt bondage of ancient Athens, today’s young people never even got their hands on the money. Our job as parents is to help our children and grandchildren unscrew themselves by giving them a source of real capital and showing them how to use it.

Editor’s note: It is our mission at Bonner & Partners Private Wealth to ensure a secure future for our children. To make sure they can “unscrew” themselves. Independently, of course. We take this mission very seriously and have built a small group of members that do too. If you would like to know more, here’s the entire story.

Bill Bonner started Diary of a Rogue Economist to share his over 30 years of economics and market experience with as many interested readers as possible.

Diary of a Rogue Economist is always free, and it’s delivered to your email each business day. Sign Up HERE