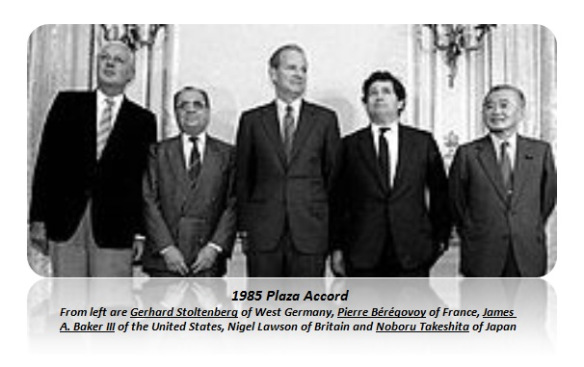 The Swiss Peg cracked because of the flight of capital from Euroland. There is still a risk that the money flows more into treasuries going into the end of the summer. The more unstable Euroland APPEARS, the more capital will flee to the dollar. The higher the dollar, the more PROFIT on US debt for foreign investors. This is similar to the 1987 Crash that took place in equities. The 1987 Crash was currency driven set in motion by

another BRAIN-DEAD idea of forming the G5 in 1985 to manipulate the dollar lower. It was the Plaza Accord that forced structural changes in Japan known as “reforms” all designed to lower the US Trade Deficit that was not even real. The lawyers in charge looked at the current account and did not understand the more Japanese invested in US government bonds, the inflow appeared in the capital account while the interest payments flowed out of the current account these fools assumed was trade. The stock market crashed because foreigners perceived the dollar would decline by 40% and sold dollar assets. We are looking at this phenomenon in Euroland. The spread between German 10 year and US 10 Year Treasuries may prove to be the trade of the century later in the year (short Germany Long US). German rates .45% v 1.84%.

Does the Model Change Its Mind?

The One World Currency & Cryptocurrencies

The Petro Dollar is Dead – Long Live the Dollar