Two Gold Ratios You Should Watch 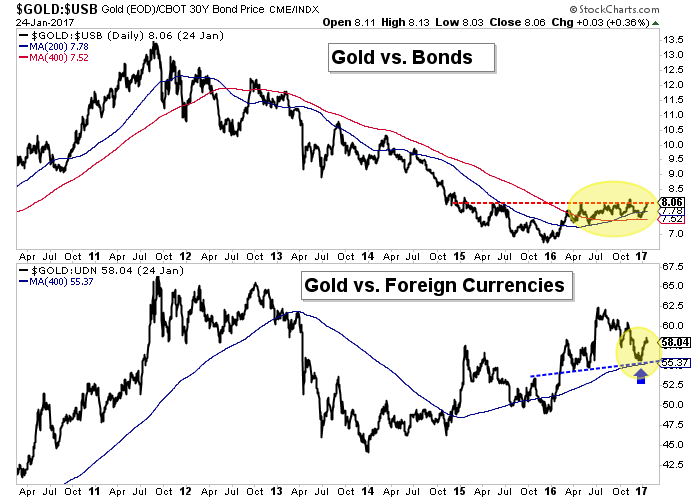 As Gold and gold mining stocks approach strong resistance, we wonder if the outcome will be a sharp selloff or a period of bullish consolidation. While there are a handful of things we can examine (sentiment, momentum, relative strength, etc), today we will focus on Gold and its relative strength against two key markets. How Gold fares against Bonds and foreign currencies in the weeks ahead could be a hint of its trend heading into spring.

As we can see, the Gold/Bonds ratio is attempting to breakout from two-year resistance. The ratio has consolidated for the past nine months and now the moving averages are aligned in bullish fashion. Meanwhile, Gold/FC is trading above support but like Gold itself faces resistance from early autumn. Gold has been lagging the miners recently and that is a good thing. The miners should lead. However, as Gold nears resistance (potentially at $1250/oz) it is important for it to show relative strength against the other asset classes and in particular Bonds and FC. A breakout in the Gold/Bonds ratio would signal that Gold would be less affected by weakness in Bonds (and rising yields). Meanwhile, continued strength for Gold/FC would signal that Gold would be less impacted by a rising US Dollar.

When focusing on the very short-term we see that Gold has been turned back at $1220/oz while the miners have continued to grind higher. They opened lower Wednesday but managed to close at the highs of the day. Their rebound is getting long in the tooth but there is a chance they could grind higher towards the red lines. As Gold and gold mining stocks approach resistance we will keep an eye on their performance relative to the movements in other asset classes. A pullback from resistance is very likely but the question is if the pullback evolves into a deeper correction or a bullish consolidation. In the meantime we have focused on buying quality and value in the junior space while maintaining some cash. The good buying opportunity we noted a month ago has passed but another one will come soon one way or another.

For professional guidance in riding the bull market in Gold, consider learning more about our premium service including our favorite junior miners for 2017.