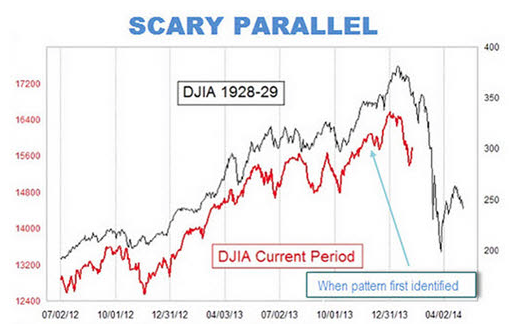 A picture says a thousand words. That’s why the ability to read a stock chart is important for every investor, even on a basic level.

Read them incorrectly, and they can lead you in a very wrong direction. And if the data they contain is skewed, an investor has no chance!

For example, the chart below has made its rounds all over the Web and social media for the past several weeks. Bearish writers see a frightening similarity between the period just before the 1929 Crash and today. Another such crash would be scary — but you see it in this chart only because someone completely manipulated the data!

The next chart uses the broader S&P 500 instead of the 30-stock Dow Jones Industrial Average — and restarts both indexes at 100. As you can see, today’s bull market isn’t remotely like the one leading up to the 1929 plunge.That doesn’t mean another crash is impossible — but it also doesn’t look imminent.

I’m not showing these charts to dispute anyone’s market outlook. My point is that it’s easy to look at two completely unrelated markets and draw a wrong conclusion — especially if you twist the data to “prove” your point.

Whoever first drew the “scary parallel” was probably already bearish for other reasons. He or she went looking for evidence to support a pre-determined conclusion.

That’s exactly backward. What you want to do is look at the data first and then decide what it means. If you already believe something, you’ll always find plenty of evidence for it.

I find many investors and even some analysts in our industry look for stories to support their market bias. Right now, I don’t see anything that would warrant a drop comparable to 1929.

The market benchmarks looked impressive last week and today, they clawed back toward break-even after a rough start to the year. That’s encouraging in the short term.

It needs to continue, though. We aren’t out of the woods yet.

My stories last week about the Keystone pipeline, Cutting the Cable TV Cord, and February Frugality brought tons of reader responses. Thanks!

Below are some quick examples. I’ll try to run more if no other big stories pop up this week.

Gene says he is an engineer and not afraid of Keystone.

Reader Gene R. says: “Energy pipelines are far better than thousands upon thousands of rail cars and tanker trucks rolling around. Remember, each one of those is loaded and unloaded with a large flexible hose and a lot gets spilled in the process, not to mention little leaks everywhere — it’s just reality. Plus, the vehicles are very dangerous to everybody else on the highways.”

Reader Don C. says: “Yes, I have cut the (pay TV) cord and am headed that way for my parents who are on a limited fixed income since retiring with little investments. The FCC has a webpage explaining how to do it. One link provides an estimate of local HD TV signal strength and identifies the channels based on ZIP Codes. The site shows the tower signal directions to help one aim the antenna to maximize reception.

“My parents can expect up to 37 channels and lower their TV expenses by about $1,000 annually since they do not use the Internet. With a $10 splitter, they can operate multiple TVs from one antenna. A $40 omnidirectional antenna suits their location since they are in a metro area versus rural location.”

Brad: The FCC web link is great, Don. Thank you for sharing.

Reader Shirley says: “Yes, I think people are cutting back on everything. The government tries to tell us inflation is not a problem. What country do they live in or what grocery store do they shop? Gas, clothes, food, everything is going higher. Cable TV, utilities and city services are going crazy.

“How is the average person to make a living? I don’t think we have seen anything yet. How can the average family save any money for a rainy day?”

Brad: I feel your frustration, Shirley. Officially, inflation is very low, but it’s still high enough to crimp consumer spending. Let’s hope it doesn’t get too far out of control.

You can go back and read the articles that inspired these comments at the links above. The feedback box is open for other topics, too. Just click here to send me a message.

Here is some news to start a shortened market week…