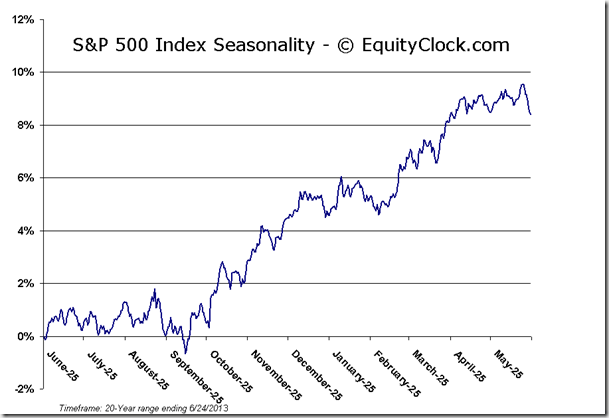 Anybody notice the massive head-and-shoulders topping pattern on the TSX Composite?   It has been obvious that the Canadian benchmark charted a triple top at 12,900, a peak reached in January, March, and May.   It could also be argued that a head-and-shoulders pattern is potentially in play as well, a bearish setup that would push the benchmark further into negative territory on the year.   A break of the neckline, presently around 12,000, could target 10,900, or over 9% lower than present levels.   Until the technicals improve, equity markets are within a negative trend, defined by a series of lower-lows and lower-highs.   Beware of the seasonal volatility ahead as we progress later into the summer. The equity market selloff continued on Monday as investors remained concerned by the looming Fed tapering of present monetary stimulus.   The S&P 500 declined by around 2% at the session low, but trimmed the losses into the close as investors sought to buy the dip.   The trend for the market remains negative and the technical sell signals are accumulating.