Trying to Stay Sane in an Insane World 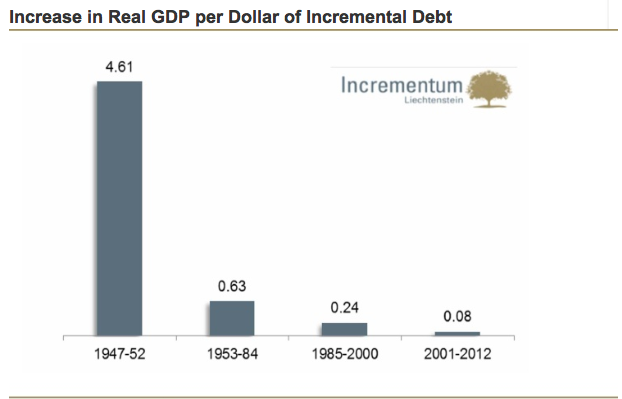 We are witnessing the beginning stages of political collapse. The government and its leaders are being discredited on a daily basis. The mismanagement of fiscal policy, foreign policy and domestic policy, along with the revelations of the NSA conducting mass surveillance against all Americans has led critical thinking Americans to question the legitimacy of the politicians running the show on behalf of the bankers, corporations and arms dealers. The Gestapo like tactics used by the government in Boston was an early warning sign of what is to come. Government entitlement promises will vaporize, as they did in Detroit, with pension promises worth only ten cents on the dollar.

Total social and cultural collapse could resemble the chaotic civil war scenarios playing out in Libya and Syria. The best case scenario would be for a collapse similar to the Soviet Union’s relatively peaceful disintegration into impotent republics. I don’t believe we’ll be this fortunate.

The most powerful military empire in world history will not fade away.

It will go out in a blaze of glory with a currency collapse, hyper-inflation, and war on a grand scale.

In the first three parts (Part 1, Part 2, Part 3 below the GDP Chart ) of this disheartening look back at a century of central banking, income taxing, military warring, energy depleting and political corrupting, I made a case for why we are in the midst of a financial, commercial, political, social and cultural collapse. TRYING TO STAY SANE IN AN INSANE WORLD – PART 1 “I mean—hell, I been surprised how sane you guys all are. As near as I can tell you’re not any crazier than the average asshole on the street.” – R.P. McMurphy – One Flew Over the Cuckoo’s Nest

“Years ago, it meant something to be crazy. Now everyone’s crazy.” – Charles Manson

“In America, the criminally insane rule and the rest of us, or the vast majority of the rest of us, either do not care, do not know, or are distracted and properly brainwashed into acquiescence.” – Kurt Nimmo

I have to admit to being baffled by the aptitude of the Wall Street and K Street financial elite to keep their Ponzi scheme growing. I consider myself to be a rational, sane human being who understands math and bases his assessments upon facts and a sensible appraisal of the relevant information obtained from trustworthy sources.

TRYING TO STAY SANE IN AN INSANE WORLD – PART 2 In Part 1 of this article I detailed the insane solutions proposed and executed since 2008 by our owners as they attempt to retain and further expand their ill-gotten wealth, acquired through fraud, deceit, swindles, and the brilliant manipulation and exploitation of the masses through Bernaysian propaganda techniques. Madness has engulfed the entire world, with a concentration of power in the hands of a few psychopathic financial elite wielding an inordinate and dangerous expanse of power over the lives of the common man. They are a modern day version of Al Capone, except their weapons of choice aren’t machine guns, but a printing press, peddling debt, creating derivatives of mass destruction, and peddling heaping doses of disinformation. The contemporary criminal class wears Hermes suits, Rolex watches and diamond studded pinky rings, drops $500 to dine at Masa in NYC, travels by chauffeured limo, lives in $10 million NYC penthouse suites, occupies luxurious corner offices in hundred story glass towers, and spends weekends hobnobbing with the other financial elite at their villas in the Hamptons. They have nothing but utter contempt for the lowly peasants who depend upon a weekly paycheck to make ends meet. Why work when you can steal $1 or $2 billion from farmers with no consequences?
…..read all of Part 2 HERE

TRYING TO STAY SANE IN AN INSANE WORLD – PART 3 In Part 2 I tried to articulate why the country has allowed itself to be brought to the brink of catastrophe. There is no turning back time. The choices we’ve made and avoided making over the last one hundred years are going to come home to roost over the next fifteen years. We are in the midst of a great Crisis that will not be resolved until the mid-2020s. The propagandists supporting the vested interests continue to assure the voluntarily oblivious populace the economy is improving, jobs are plentiful, inflation is under control, and housing is recovering. Bernanke and his band of merry money manipulators, Obama and his gaggle of government apparatchiks, and their mendacious mainstream media mouthpieces have enacted radical measures in the last five years that reek of desperation in their effort to give the appearance of revival to a failing economic system. Stimulating the net worth of bankers and connected corporate cronies through engineered stock market gains has not trickled down to the peasants. Our owners try to convince us it’s raining, but we know they’re pissing down our backs. Our Crisis mood is congealing. In this final installment I’ll give my best estimate as to what happens next and it has a 100% probability of being wrong. There are so many variables involved that it is impossible to predict the exact path to our world’s end. Many people don’t want to hear about the intractable issues or the true reasons for our predicament. They want easy button solutions. They want someone or something to fix their problems. They pray for a technological miracle to save them from decades of irrational myopic decisions. As the domino-like collapse worsens, the feeble minded populace becomes more susceptible to the false promises of tyrants and psychopaths. There are a myriad of thugs, criminals, and autocrats in positions of power who are willing to exploit any means necessary to retain their wealth, power and control. The revelations of governmental malfeasance, un-Constitutional mass espionage of all citizens, and expansion of the Orwellian welfare/warfare surveillance state, from patriots like Julian Assange, Bradley Manning and Edward Snowden has proven beyond a doubt the corrupt establishment are zealously anxious to discard and stomp on the U.S. Constitution in their desire for authoritarian control over our society.

Anyone who denies we are in the midst of an ongoing Crisis that will lead to a collapse of the system as we know it is either a card carrying member of the corrupt establishment, dependent upon the oligarchs for their living, or just one of the willfully ignorant ostriches who choose to put their heads in the sand and hum the Star Spangled Banner as they choose obliviousness to awareness. Thinking is hard. Feeling and believing a storyline is easy.

….read all of the Final Installment HERE