Trumponomics: Going for a Ride on the Trump Train 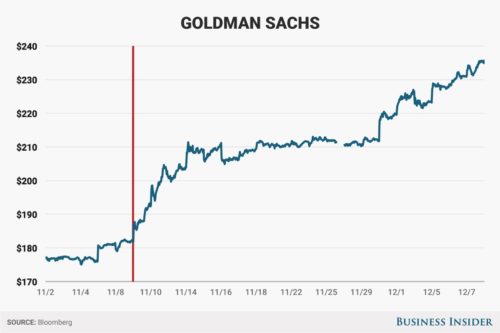 I’m afraid the Trump train is headed for a sharp economic curve that takes the US further away from free-market capitalism. The US already pulled out of the free-market station a long time ago, but Trumponomics moves deeply into a “mixed economy,” an economy in which government funding and private funding are married. The bankster-baron confederation in the Trump cabinet is where business and government consumate their marriage.

My pervious article about Trump’s cabinet lineup demonstrated a major economic shift forming in the presidential cabinet. This article explains what that shift means.

How Trumponomics may radically change the US economy

In Trumponomics, this is worked out by placing corporate giants in direct control over all the reins of government in order to make sure that government is compliant to corporate interests as an effective way of boosting the economy. Trump has stated that most of his infrastructure spending will come from private enterprise, and this confederation assures government funding and business funding align.

While this union empowers rapid economic growth, the downside to Trumponomics is that a mixed economy easily sidetracks from its stimulus intentions to becoming the ultimate form of crony capitalism because government and industry become such intimate partners in development that you cannot tell where one begins and the other really ends. That entices a flow of money from public to private interests. The state risks becoming the weaker partner in this arrangement — a mere servant of corporate needs and wants — because those running the state have their former institutions, lifelong friends and their pocket books at heart.

Purportedly, Trumponomics is for the economic betterment of the entire nation, which is accelerated by combining the strength of state and business as a team in a unified direction. (It worked well for Germany after World War I.) I believe the Donald intends it for the best; but another downside is that Government — instead of having purely regulatory roles (congress and the executive branch) and the judicial role — effectively subsidizes certain businesses in creating the projects that government wants to accomplish.

Trump is proposing that government may, for example, pay half the cost of building a bridge while a private contractor pays the other half in exchange for owning the right to collect a toll at the bridge forever. A bridge can support a toll that will be profitable up to a certain cost of construction. Above that cost, no one will pay the toll. So, the government kicks in the full cost above what industry sees as leaving room for an acceptable margin of profit. Government also helps clear the hurdles for construction. That gets a lot more things done quickly, but at what risks?

Trumponomics is a plan for petal-to-the-metal growth; but it leaves no one regulating businesses when business executives are placed in charge of all the regulatory agencies. Another pitfall is that government, instead of simply assuring a level playing field for all businesses, can slip into favoritism toward businesses that are highly regarded by the corporate executives who assume the government reins of power.

Granted, the US hasn’t had a truly free market for decades. The Fed, which is corporately owned, already rigs the economy constantly by enticing banks to soak up government debt at practically no interest with its promises of buying the debt back from its member banks and by creating money that it gives freely to banks to invest in stocks.

Trump, however, is moving the country further in the direction of a mixed economy. Instead of state ownership of the economy (communism), it is corporate ownership of the state by corporate control of state offices, potentially directing them to the opposite end from what those offices were originally created for as regulatory bodies.

I’m not saying corporate leaders should never hold cabinet positions, but when the cabinet is stacked almost entirely in the direction of Trump placing his corporate cronies in power, it looks very problematic, whether they are truly cronies (as in friends) or just a clutch of high-power corporate colleagues.

The early surprise effects of Trumponomics

Trump is already boosting the economy, and he hasn’t even assumed office. His Wall-Street cabinet lineup and his enormous corporate tax gifts (See “Trump: Titan of Corporate Tax Cuts” and “Trump Tax Plan Turns the Donald into Trickle-Down King.”) coupled to his promise that the government will take out huge sums of debt to buy projects from corporate tycoons have all certainly goosed stock-market expectations. Investors now run long with hopes that Trump’s plans will further inflate the stock market bubble to all-time weather-balloon heights.

Given how Trump railed against Wall Street in his campaign, it is ironic that Trumponomics has proven most outstanding for Wall Street where bank stocks have risen more than any other sector. Leading the leaders of the pack, Goldman Sachs has absolutely skyrocketed, up a massive 33% since Trump won the election earlier this month: The financial sector has taken off since the election, on the assumption that a Republican administration will foster a much more lenient regulatory environment than has been in place since the financial crisis…. In particular, Goldman Sachs — a previous employer of several key Trump advisers — has been on a tear…. Indeed, according to legendary trader Art Cashin, about one-third of the postelection increase in the Dow Jones Industrial Average came directly from Goldman Sachs’ performance. (Business Insider)

Three of Trump’s key team members are former Goldman Sachs executives. Several others come from or own other major banks. To be sure, the Trump cabinet looks like a cabal of the world’s biggest bankers, such as you might find meeting in a darkly paneled room at the Hotel de Bilderberg or in Davos, Switzerland.

This all builds a massive amount of steam to power economic growth (and, for that reason, it may be hard for Democrats to totally resist when confirmation time arrives, though they have manifold other reasons to object); but where does the Trump train end up?

To what extent will the corporate interests that now saturate the Trump cabinet come to own government and use its potent economic fuel to power their own engines? Such massive economic changes certainly have the power to change my predicted 2016 schedule for the Epocalypse, made before anyone knew Trump would be the engineer of the nation’s new economic train — vastly different from Obama’s sputtering economy.

That would be good, except I think the Trumponomics train arrives at the same station only with much more momentum as we power headlong into much greater government debt, crewed by a cabinet rife with conflicts of interest and enticements toward self-serving corporate corruption. We are either counting on the sterling reputation of the nation’s biggest bankers and oil barons to resist temptation or on Trump’s mighty ability to keep this rambunctious train on the rails and out of the swamps of corruption while running the locomotive at a head pressure greater than the engine’s normal operating capacity.

Will we say at the end, “How the mighty have fallen?” Trumponomics ends in a train wreck if it doesn’t end before it even begins.