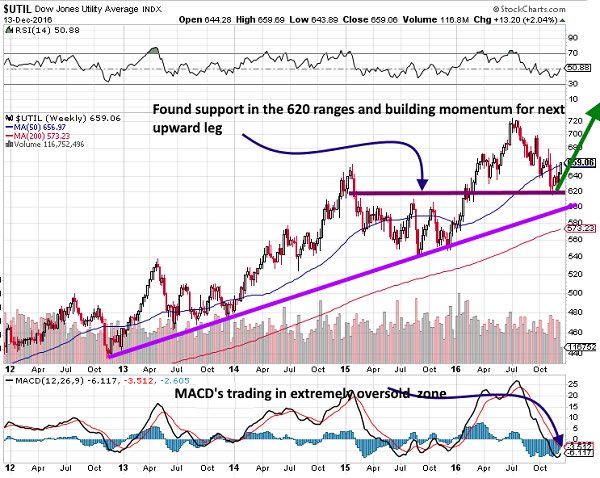 Uncertainty and mystery are energies of life. Don’t let them scare you unduly, for they keep boredom at bay and spark creativity. R. I. Fitzhenry

The transports topped out in November of 2014, and according to the Dow theory this is a big negative;  the Dow industrials should have followed suit. Instead, the Dow soared higher paying no heed to this theory proving to a large degree that this theory has lost its value. After all, it is a theory and the definition of a theory is “a supposition or a system of ideas intended to explain something, especially one based on general principles independent of the thing to be explained.”

That is why way back in 2006 we offered a Dow theory Alternative that has proved to be far more accurate and reliable than the Dow theory.  Just to let this sink in, the transports topped out almost two years ago and instead of trending lower the markets have surged to new highs. If you look at the above chart, the Transports appear to be finally gathering momentum and to break out. In the Dow theory alternative, we stated it was the Utilities that lead the way as opposed to the Dow transports, well let’s see if that holds true.

Instead of the markets breaking down, due to the negative divergence between the Dow transports and the Dow industrials, the market after experiencing a very brief shock due to a Trump win, recouped and went on to soar to new highs. For the record, we predicted in September that a Trump win would prove to be an excellent buying opportunity in advance of the development.

From a pure trading perspective, a Trump win would provide contrarian players with an incredibly attractive buying opportunity.  Like Brexit, the crowd is bound to overreact as they stampede for the exits, creating opportunity instead of disaster.  The experts were dead sure that Brexit was going to create chaos; turns out that the only mess it created was amongst the experts when they were forced to eat their rubbish.  Before Brexit, we stuck to our theme that any correction should be viewed as a buying opportunity. Just as Brexit was all bark and no bite; the same phenomenon is likely to play out if Trump wins. All the Naysayers from every crack and crevice will emerge screaming the end of the world and when the world does not end they will be forced to crawl under the rock again.  It would be good to keep this saying in mind if Trump wins “dance when the crowd panics and standstill when they jump up with joy”.  Regarding who is the better candidate, we will let our readers make that call. Tactical Investor

Now to the million dollar question; is the stock market ready to crash and has the Trump effect run its course?

The simple answer is no; the stock market is not ready to collapse. It is, however, ready to experience a correction in the not too distant future. The correction could range from mild to slightly sharp, but a crash is not imminent. Human nature is such that, it does not favour simple answers, it looks for complex answers even if they are unwarranted.

Let’s start with the Trump effect

The only reason we brought Trump up in the article we penned in September was because the sentiment was intensely negative;  we knew that if he won, it would create a shock effect, similar but stronger in nature than Brexit. As the trend was up, such an event had to be viewed through a bullish lens.  The Trump effect falls more along the lines of Gossip, so we are not going to delve into it much

There is a mania gripping the markets, which is almost irrational in nature to some degree.  Some Individuals seem to have assigned Trump with a demigod status, and they believe that he can solve all their problems. This is an impossible task for anyone, so there is bound to be some disappoint going forward. Whether the disappointment will be mild or extreme is something that time will tell.  He has done a few things that seem to resonate well with his followers so until they abandon him; it is likely the Trump effect will run for a bit longer. If he sticks to his promise of getting rid of red tape, lowering corporate taxes and getting rid of two rules for every new rule created, it should provide an environment that is conducive for business.  The markets are forward looking beasts, and they view Trump through a bullish lens; never fight the trend, unless you want to experience the bitter feeling of defeat.

Is the Dow Theory irrelevant and what lies in store for this market going forward?

We still lean to the argument that there is a better alternative than the Dow Theory and in fact, we think the Dow theory as it stands is entirely irrelevant.  You can read the article we listed above if you want to find out why we feel this way.  Regarding the second question, we briefly addressed above, and as stated while the Crowd is not as nervous as it was back in October and early November; the masses are not euphoric. Current sentiment data seems to confirm this outlook. However, the main reason the markets will not crash is that the trend is still up and until the trend changes direction; all sharp pullbacks should be seen through a bullish lens.

As we alluded to in the alternative Dow Theory article, the Dow utilities lead the way up and or down. It looks like the Utilities are coiling up to break out again. This suggests that the Dow industrials will follow in their footsteps.  If you look at the utilities, you will see that in general, it tends to lead the way up and down and is a better barometer of what to expect from the markets than the Dow transports. The utilities are coming out of a correction, so this means that the Dow is likely to experience a correction sometime in the 1st part of next year before rallying higher. The correction should fall in the 5-10% ranges. We use the utilities as a secondary indicator. Our primary indicator is the trend, and as the trend is up, we would view a strong pullbacks as a buying opportunity.

The last time we put this data out publicly, the anxiety index was trading close to the Hysteria zone. Granted it has advanced quite a bit since then, but the gauge is still far from the calm or euphoric zone.  The masses have still not embraced this market, and until they do, sharp pullbacks need to be treated as bullish developments.

Yes, this bull market will experience a back breaking correction one day, but that day is still not upon us.  No bull market has ever ended without the masses jumping in; in other words, the masses need to turn euphoric. Some of the most famous and foolish naysayers out there, love to use the term “the truth hurts” when talking about the markets. Does the truth really hurt; is the truth not supposed to liberate you or set you free. The most egregious of these naysayers will hide behind such names, and come out with fantastic proclamations that make no sense whatsoever and sound more like the ravings of a lunatic.   Instead of reacting to such individuals in a negative manner, think of them as the best contrarian indicator out there.  This is valuable data for one day these fools will embrace this market, and when they do, you will know the end is near.  Disqus is a good source if you are looking for individuals of such a calibre.

The Dow utilities are getting ready to break out, and as they lead the way up, it is likely that the Dow will continue to follow in its footsteps. Like the Utilities the Dow is likely to experience a correction before trending significantly higher, and this is most liable to occur in the 1st quarter of next year.

The trend (as per our trend indicator) is still bullish, and it is showing no signs of weakening. Until it changes direction, the market is not likely to crash. We can already tell you what will happen the moment the markets start to pullback. They will sing the same song; something we had already described in past articles when we discussed Brexit, the possibility of a Trump win, etc. The naysayers will rush out once again proclaiming that all hell is going to break loose. They are not students of history and refuse to learn from it; instead, they seem almost to take masochistic pride in repeating the same mistakes over and over again, in the hopes that they will be correct. One day they will be right, but by that time anyone who had listened to them would have been bankrupted several times over.  As the markets drop, the Dr’s of Doom will scream louder and louder; momentarily it will appear that these guys have finally struck Gold. Then the brief period of joy will vanish, and their songs of joy will turn into pain as the market suddenly puts in a bottom and rallies upwards. Like cockroaches, they will disappear in the woodwork waiting for the next moment to sing the same miserable tune of gloom.  Don’t fall for this rubbish; in fact,even rubbish has some value; it can be used as compost.

A fool despises good counsel, but a wise man takes it to heart.