“In short, markets were overly skittish into the election and the big flush on election night cleared the way for what the presidential cycle forecast should happen; and that is for the last 2 months of the election year to be bullish.  And here we are, complete with dumb money eating up stocks and puking out bonds.”

It is the last sentence that is of interest for this week’s eLetter.  Overly sensational subject line aside, long-term Treasury bonds are making a contrarian setup when viewed from a sentiment perspective.

Sure, T bonds are in bearish technical trends and appear to be a fundamentally unsound asset class, given the decades old debt-for-growth regime and the would-be inflationary plans of the new administration; but when looking strictly at sentiment, long-term Treasuries are a ‘buy’ and a good, risk ‘off’ way to hedge stock positions while paying out monthly income (unlike shorting stocks).

Let’s first look at public sentiment toward the 10 year Treasury.  Do you remember last summer?  That would be the time frame that global NIRP (negative interest rate policy) was being promoted in the financial media.  What happened last summer?  Why, people herded into Treasury bonds in a risk ‘off’ frenzy, bought bonds at ridiculously low rates of interest and then got blown up for their herding behavior.  The bond has dropped ever since as the new promotion, rising interest rates, took hold.  Last summer was a time to get risk ‘on’ (during Brexit) as we noted at the time.

That is what the dumb money is doing.  Now what about those considered the smart money, the Commercial Hedgers?  Why, there they are taking the other side of the trade once again.  After positioning net short during the NIRP/Brexit hysterics, they are now in a strenuously bullish alignment:

The above comparisons not only work for the shorter-term, post-NIRP/Brexit period but they also hold true on a longer-term scale.  Today the media are promoting the “Great Rotation, Part 2” (out of bonds and into stocks) once again, and the public is sucking on this story as they do all such stories coming out of the mainstream financial media.  In 2013, something very similar happened as the media promoted the first “Great Rotation”.  Looking at the late 2013 time frame on the graphs above, you see that dumb money took the bearish bait and smart money was positioned for a bullish outcome.  The 10 year bond then rallied for 2 years out of that contrary setup.

Last week I made a post at nftrh.com showing the media in full promotion mode, as it cherry picked one lone trend line drawn by Louise Yamada and blared to the world…

The green dotted line is the ‘Yamada line’.  As I noted in the post, the bond bull may well have ended last summer as every last dumb money unit bought the bull during the NIRP hysteria.  But technically, on this big, multi-decade view of the 10yr yield, the bond bull is not over.  It is 100% intact and will be intact until the yield a) exceeds the (red) monthly EMA 110 (currently at 2.69%), which has limited all previous rises in yields and b) makes a higher high above the late 2013 “Great Rotation” promotional high of 3%. 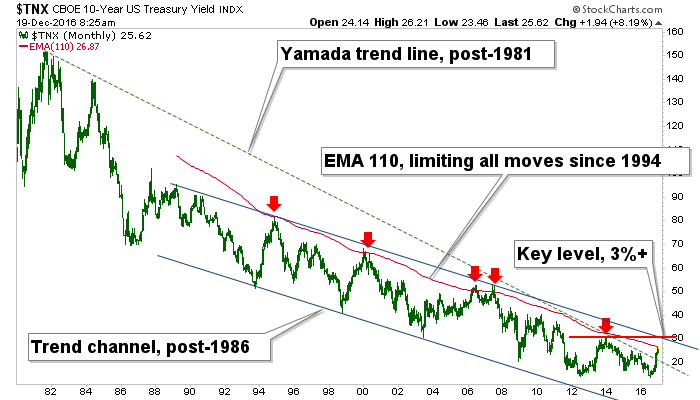 While under great price pressure on shorter time frames, the long-term bond bull market is 100% intact, technically speaking.  The NIRP buy-in did seem like the type of sentiment event that could end a big bull market, so we can remain open to that outcome.  But first, it appears that legions of dumb and smart money are aligned for an interim bullish outcome in Treasury bonds.

If the above is the type of analysis you seek, consider that the bond market is just a small slice of the full range of markets covered each week in the well-rounded NFTRH premium service.  Remaining on the right side of policy-stoked, dynamic markets requires consistent viewing from many different angles, while cross referencing different asset classes and indicators.

Biiwii.com and NFTRH.com do not recommend that any trading or investment positions be taken based on views expressed in this eLetter. If you speculate or invest it is suggested that you consult a financial adviser qualified in your area of interest.  See full Terms of Service (ToS) above.