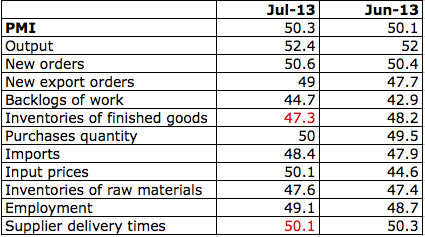 Treasuries rallied after American employers added fewer workers than anticipated in July, damping speculation the Federal Reserve will trim bond purchases. Benchmark U.S. stock indexes rose to record highs, extending yesterday’s rally, while the dollar weakened. Gold prices were probing below near-term support on Friday ahead of the read with the print fueling a rally back above the $1300 level when the U.S. Dollar came under pressure.

The employment report was weaker than expected and “increases the likelihood that tapering may be delayed,” said Paul Herber, portfolio manager of the Forward Commodity Long/Short Strategy Fund “Any delay in reducing monetary stimulus has been seen as a positive for gold.”