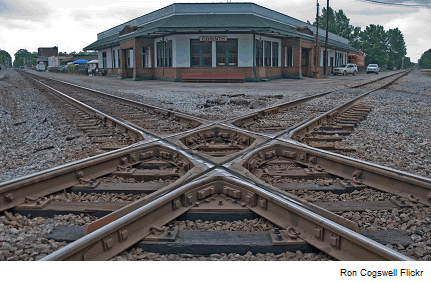 Weakness In Transports In 2015

If you follow the markets, you have probably heard about the “non-confirmation” warning being flashed by the fact the Dow Transportation Average has failed to post a new high simultaneously with the Dow Jones Industrial Average.

We have written about Dow Theory many times in the past; a July 2014 article explains the economic rationale behind the theory. We believe Dow Theory is useful, but it is one of many sources of information.

Is It A Showstopper?

We will answer the question above with a few historical charts. Charts allow us to reference facts rather than

human bias or emotions. If I showed you the chart below, it would represent a “non-confirmation” period since the Dow Transportation Average has failed to push to a new high. We have removed the dates from the chart below to minimize historical bias. The chart below shows the exact same period as the Transportation chart above. Did a new bear market start during the period of non-confirmation? Would it have made sense to sell all our stocks because the Dow Transports failed to make a new high? Answers: No and No. In fact, the non-confirmation was not particularly insightful or helpful at all since the S&P 500 gained 25% over the same period. Bringing The Charts Together

The chart below allows you to see both indexes together. Dow Theory is relevant, but the fact that the Transports have not made a new high in 2015, taken in isolation, is not a reason to sprint for the equity exits. You Can Always Find Bearish Data

If you are bearish, you can always find a chart that supports your personal outlook. The same can be said for the bullish side of the ledger. It is prudent to look at any information (bullish or bearish) in the context of a broader array of useful inputs. Our concerns about the Transports in 2015 would be greater if more inputs were singing off the same hymnal. That may happen, but we need to see that data, rather than anticipate it.

Some Other Takes On Trannies

This is a hot topic on Wall Street. You may want to see what others have been saying:

The Weight Of The Evidence Takes Precedence

We can learn something about the market and economy via the recent weakness in the Transportation Average, but it is not prudent to make decisions in any field based on one input viewed in isolation. The links below allow you to look at the 2015 stock market through a broader lens: