Trading Volumes Decline as Hoarding Rises Due to Uncertainty 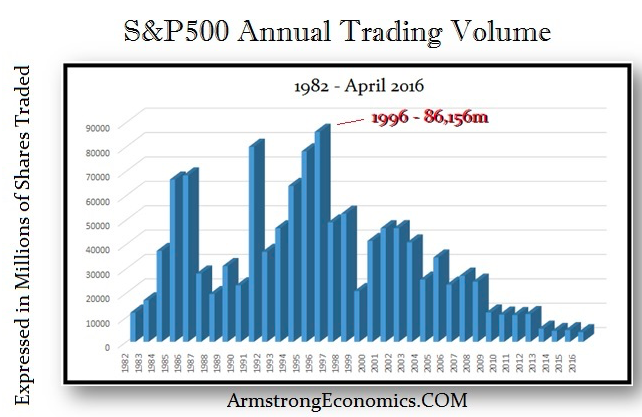 QUESTION: Everyone in the gold industry says you are wrong. The stock market will crash by 90% and gold will soar. Will you address that scenario just once?

ANSWER: I have answered this frivolous question countless times. This is the most bearish rally in stocks ever. That is why the stock market has kept rising. The shorts always have to buy back. Just look at the big hedge funds. Their performance has declined markedly because they have taken that typical view. I displayed how the Velocity of money peaked in 1998 and has been in a bear market ever since. Naturally, people believe what they want to believe and ignore anything that shows them to be wrong. Well now look that the ANNUAL accumulative trading volume in the S&P500. It too peaked in 1996. Volume finally bottomed in 2014 and is at last edging up. We expected the turn upward in 2015 as this was also 86 years from 1929 (8.6 * 10).

Even the speculative bets on the direction of currencies have also dropped to the lowest in years, while average daily trading among dealers in U.S. Treasuries is close to a seven-year low.

I’m sorry. But please explain to me how the stock market will fall to 10 cents on the dollar when there is no massive retail speculation? This is by no means 1929 with people jumping out of windows. You want to believe that so no matter what evidence I show you, you will say I am wrong and just ignore me.

There is something far more sinister at foot. Just keep listening to that nonsense since it makes you feel better. The rest of us will be reviewing the world economy to get a glimpse at just what the heck is really going on here that has confounded all the theories devised by classic thinkers.