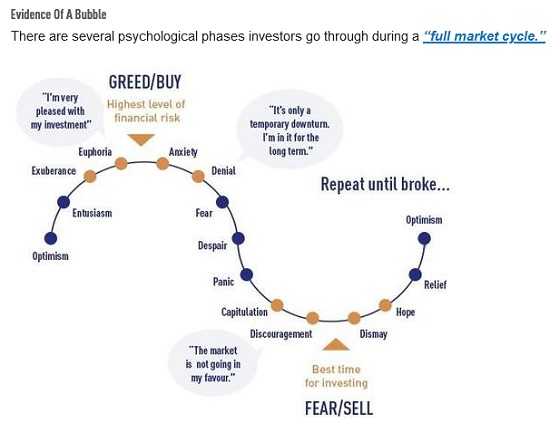 A handful of BIG cap tech stocks make all the difference

The DJIA and the small-cap indices closed lower for two consecutive weeks (the DJIA fell as much as 1,000 points from last week’s high to this week’s low) – but the Nasdaq and the S+P 500 indices hit new All-Time Highs this week.

The American stock market has massively outperformed the Rest Of the World – largely thanks to the same handful of BIG cap tech stocks.

The recent inflation surge means the difference between nominal rates and after-inflation rates has dropped more deeply negative. A critical aspect of deeply negative real interest rates is that they add to the “pressure” of capital flowing into risk assets. Deeply negative real rates mean that people who should be “savers” become “traders” – reaching for yield in risky markets.

The USD hit (what I called) a cathartic inflection point on Wednesday, January 6, 2021, when the mob stormed the Capitol Building in Washington, DC. It was a 34-month low for the US Dollar Index, and since then, it has rallied ~ 8%.

The Japanese Yen has tumbled ~10% since January, hitting a 56-month low this week.

The Euro currency has fallen ~8% against the USD since early June. Against the Swiss Franc, the Euro is down 6% (near All-Time record lows) during that same period. I look at the Euro falling against the Franc as a sign that European citizens are moving money to “safety” because they are unhappy with or fearful of the political/economic climate in Europe.

The Canadian dollar hit a 4-year low at ~68 cents during the Covid Crisis of March 2020 but rallied to 83 cents (22%) at this year’s high as 1) the USD trended lower and 2) commodity and stock markets trended higher.

The CAD peaked at ~83 cents in June as the USD started to trend strongly higher and rolled over from a lower peak in October as the commodity indices (and crude oil especially) dropped away from 7-year highs.

With the USD making solid gains against virtually all currencies this month, it is hard to tell if the CAD is suffering from the effects of the extensive flooding on the West Coast, which has crippled vital transportation links.

Gold rallied the last two weeks even as the USD rallied – and that’s unusual outside of “haven buying” on a geopolitical event. The rally broke through several key technical levels and was accompanied by a 20% surge in open interest. Net speculator long positioning in the futures market soared.

WTI rallied from ~$62 to ~$85 (37%) from August to October as “re-opening” demand surged and OPEC+ made only modest production increases. The need for crude “right now” caused a very sharp increase in the price of nearby futures over deferred futures during October, but a lot of that has faded away as front-month prices have dropped from ~$85 to ~$75.

This chart shows that the Dec 2021 contract was a $1 premium over the Mar 2022 contract in early September. Soaring “demand” for WTI crude drove the premium to nearly $5.50 by November 1st. It has now dropped back to ~$2 as crude prices have fallen.

Speculators may also have “backed away” from bullish positioning on concerns of a coordinated global release of government crude oil reserves and worries about rising covid cases.

I started this week with no positions, but after doing my homework last weekend, I developed a “bias” that the “runaway inflation narrative” had gone too far too fast. I decided to look for opportunities (price action setups) to fade that narrative.

I shorted gold, crude, the S+P and the CAD on Monday. I was quickly stopped for a slight loss on the S+P. I was stopped on gold Tuesday, also for a small loss, but I re-shorted the market as it fell back below Monday’s lows (gold had a daily key reversal down on Tuesday.)

I was also stopped on my short WTI position Tuesday, and I regret not finding a spot to re-short that market as it dropped $5 by Friday’s lows.

I took profits on the short CAD ahead of the weekend. I was puzzled that the CAD wasn’t weaker, given the USD’s strength and the economic disaster unfolding on Canada’s West Coast.

Going into the weekend (ahead of the US Thanksgiving week), the only position I hold is short gold. My realized P+L for the week is flat; I have decent unrealized gains on the gold position, which ended the week right on its lows.

I continue to think that the stock market is at the “Euphoria” stage of the “full market cycle,” so I will keep looking for price action setups to probe with short positions.

I think the “central banks are WAY behind and will have to tighten” narrative is overdone (or at least, fully priced in), as is the “runaway inflation” narrative, so I will look for price action setups to fade those sentiments.

President Biden has said he will announce his decision about the Fed Chair before Thanksgiving. Betting sites see Powell being re-appointed – if Biden wants to replace him the markets won’t like that.

I recorded a 30-minute interview on November 19 with Howestreet radio. I talk about what I’m seeing in several different markets, and some of the trades I’m making. Access is free.

Last week I invited readers to tell me what they would like to see in the TD Notes. Several people asked for more detail on how I trade. Here is an edited version of my reply to one of those readers:

First, I form an “opinion” about a market. For instance, the stock market has HUGE upside momentum for several reasons, but my s/t opinion is that retail FOMO has “taken it too far, too quickly.” I think it could experience a quick, nasty correction – which could morph into a more significant downside move (for instance, if it takes out the Sept lows.)

My “opinion” gets me looking for an opportunity – a setup – to get short. This trade would be an initial position. If the market fell, I would look for a setup to increase my short position.

My “opinion” is not a timing tool – price action is the timing tool. I can’t sell a market without regard to price action simply because I think there is a “good chance” that it will be lower in the future.

The S+P made a new ATH within the first hour of the “day session” on Friday, November 5 – but then started to fall back. I got short an hour later with a stop just below the ATH. The market took a swift 35 point drop from the ATH and closed the day below the mid-point of the day’s range. I felt OK staying short over the weekend. If the trade had been in the red by Friday’s close, I would have exited the trade (and cancelled the stop – the stop was intended to protect me if the market had a swift rally while I wasn’t looking.) I would not want to carry a money-losing short position into the weekend with the market in a powerful uptrend. (The Friday closing price is often the most valuable price of the week.)

The market rallied during the Sunday “overnight” session and the opening range of the Monday “day session” – and nearly hit my stop – but it then drifted lower for the next couple of days. By the Wednesday lows, I was ~75 points ahead on the trade. That was “decision time.”

Wednesday’s lows (4625) had been a resistance level in early November. If the market could break below 4625, I could see it falling another 75 points. I decided to stay with the trade – to give it the chance to become a BIG winner. But for risk management purposes, to protect my P+L, I lowered my stop to lock in at least a small gain.

The market turned higher from Wednesday’s lows, and I was stopped for a small profit (~20 points) on Friday, one week after entering the trade.

To wrap up: My process is to form an opinion about a market (I follow dozens of markets, and most of the time, I have no motivating view on many of them.) When I have a “strong” opinion, I look for confirmation from the price action. I look for a price action setup. For example, I might get short if I’m bearish and the market has just made a lower high.  Maybe the market will fall, but, at least on some time horizon, I’m not trying to top-pick a rising market.  I also need to have a potentially good risk/reward ratio for the trade given where I would place my stop – a point where I know I’m wrong to be short.

Two weeks ago, I included a link to a video done by Goehring & Rozencwajg. As I watched their video, I was thinking, “If their ideas are correct, then a TON of capital is mal-invested in the energy markets – where’s the trade?”

Here’s a link to another (5-minute) video that also makes the case that a TON of capital is mal-invested in the energy markets – and if that’s true, it will create many great trading opportunities.

Another reader sent a link to a beautiful little piece (a 4-minute read) that makes the point that amateurs will win more by avoiding stupid mistakes – rather than trying to be brilliant. This message applies to trading/investing BIG TIME.

I watched a fabulous 1-hour video interview between Raoul Pal (founder of RealVisionTV) and Keith McCullough (founder of Hedgeye.) The video is about Crypto – Macro – Regime Change – and how Millennials are HUGELY different than Boomers (and how that changes everything in markets now that the Mills out-number the Boomers.) Both men are deep thinkers and very successful traders.

This video is one of the best explanations of crypto and what it is likely to become that I have ever seen. I loved Raoul’s perception (near the end of the video) of the Regime Change underway as Millennials view RISK much differently than Boomers!

Quotes from the Notebook

My comment: I agree with Jared, but it’s in my nature to look for opportunities to fade irrational exuberance or to call “Bullshit!“

My fundamental premise in trading is that “When” is much more important than “Why.” Raoul Pal in the video noted above. 2021

My comment: I agree. I remember taking a phone call from a client many years ago when I was a commodity broker. He wanted to discuss some ideas he had about a market. After our chat, he asked me to buy some contracts for him – at the market. I wondered, “why now? Just because we’re on the phone doesn’t mean that this is the best time to enter the market.”

You can have your ideas about “why” a market should be doing something (I call it having an “opinion,” but instead of trying to be brilliant, reduce the chances of doing something stupid by concentrating on “When” you enter the market.

If you like reading the Trading Desk Notes, please do me a favour and forward a copy or a link to a friend. Also, I genuinely welcome your comments. Would you please let me know if there is something you’d like to see included in the TD Notes? Thanks, Victor

Barney getting set to hit the “irrational exuberance” bid