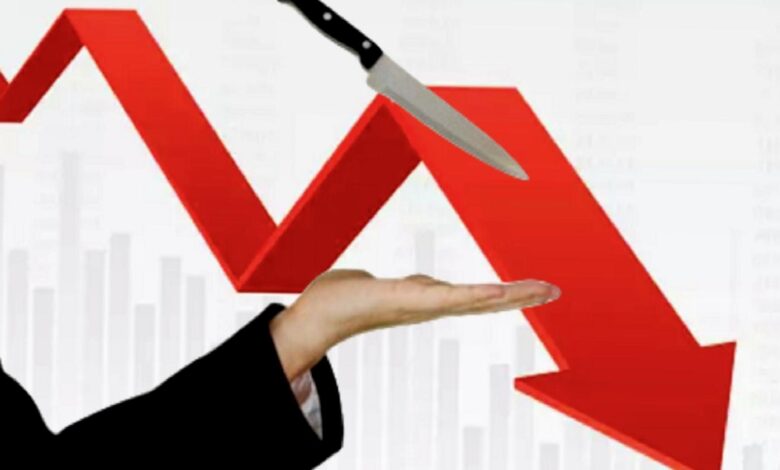 The 10-year US Treasury bond yield hit a 2-year high of 1.8% on news that the national unemployment rate fell to only 3.9% in December and that year-over-year average hourly earnings had surged by 4.7%.

American futures markets are now pricing four quarter-point interest rate increases within the next year on expectations that the Fed is determined to fight inflation and will accelerate the taper, raise interest rates and reduce the size of their balance sheet.

Another reason for falling bond prices: The Fed will be buying fewer bonds while the Treasury will be issuing more.

The S+P and DJIA Hit New Highs Early This The Week, Then Tumbled Wednesday On Hawkish Fed Minutes

The Santa rally from December 20 to January 5 boosted the DJIA >2,000 points to fresh All-Time Highs (front-running expectations of a TIDAL WAVE of new cash coming into the market in January). Still, the market reversed hard Wednesday when the Fed’s December meeting minutes showed a more hawkish-than-expected Fed. The S+P chart had a Weekly Key Reversal Down.

Interest rates have been rising for the past month, with the consequences initially hitting more speculative “investments” while the “Generals” soldiered on (AAPL officially became a $3 Trillion company early this week.) Rotation was a big deal this week as capital sought safety – “growth” (things that have been trendy and hot) was sold while “value” was bid.

Seasonally, the S+P falls in the 2nd half of January.

Not A Good Week For Gold

Rising American Interest Rates Have Helped Drive the US Dollar To A Five Year High Vs. The Yen

On January 6, 2020, the Yen hit a 4-year high against the US Dollar (Ex two days during the March 2020 Covid panic) when the mob invaded the Capitol Building in Washington DC. (I have repeatedly referred to that date as an inflection point – the US Dollar Index hit a 3-year low when there was “blood in the streets” and has been higher ever since.)

Last year’s fall in the Yen’s value picked up speed after September when it appeared that US interest rates would be rising relative to Japanese rates. From a technical perspective, the Yen fell through previous support levels around 90, and, from a positioning perspective, speculators were adding to their (substantial) short positions.

70% of household wealth in China is in real estate “investments,” and Chinese real estate looks to be in the dog house. The CCP’s “Common Prosperity” policies are a significant reversal of previous policies and are slowing the economy. Formerly high-flying tech company shares continue to trend lower. China has looked like an over-leveraged accident waiting to happen. With luck, the CCP may succeed in “containing” the damage.

Currencies: I’m intrigued by the Euro’s price action over the past few weeks – it has gone sideways in a very narrow range. I’ve actively traded currencies for over 40 years, and I’ve noticed that 1) trends often go further than seems to “make sense,” 2) the trends often make an abrupt change in direction and, 3) the trends often change direction around the turn of the year.

The current macro environment reminds me of the late 1990s when the red-hot stock market in the USA (the DotCom bubble) was a magnet for global capital. That caused the US Dollar index to rally to a 15-year high. When the stock market (especially the Nasdaq) fell, foreign money (what remained of it) went home, and the Dollar began a multi-year decline.

One of the “reasons” the USD has been rising (especially since September) has been the idea that American interest rate premiums over other currencies would be increasing – that European and Japanese rates would not rise, or if they did, they would lag far behind US rates.

Inflation has been surging higher in Europe but not in Japan. Eurozone bond yields have been rising. Perhaps the ECB will surprise markets and start raising interest rates.

I can imagine some European capital taking profits in the US equity markets and returning home – putting a bid in the Euro. If the Euro starts to rise against the USD, other currencies might follow suit, even the Yen, and gold would likely catch a bid if the USD weakens.

At this point, this is “just an idea,” and I will be watching price action for confirmation. (I’m currently long the Euro, but only small size; if it starts to rally, I’ll try to buy more.)

The caveat here is that if the equity markets start to fall hard, then the USD will likely get a “safety” bid as it did during the early days of the Covid crisis.

Stocks: Last week, I wrote that I expected a severe break in the stock markets sometime soon, perhaps starting as early as this week. The DJIA, the S+P and the VTI (Vanguard Total Stock Market ETF) all made new highs early this week but tumbled Wednesday to Friday as interest rates soared. (Positioning risk also contributed to this week’s fall – being long the American stock market is the most crowded trade in the world.)

I don’t anticipate a nasty break like the March 2020 Covid panic (unless we get a geopolitical shock). Still, I could see a “rotation” between sectors with a trend away from “speculative” and towards “value.” That alone would let some “air” out of the major indices.

My long-time friend, Bob Hoye, likes to remind me that the “real” reason that markets could take a tumble is because speculators (who’ve had a GREAT run) get exhausted. I agree!

Some analysts believe that the Fed’s willingness to fight inflation will “cave” quickly if the stock market tumbles. (If past is prologue, they might be right.) But I’ve written many times over the years that the Fed “knows” that their policies have amplified “inequality” in America, and the “strike” on the “Fed put” might be a lot lower than some shareholders expect.

So – how “political” is the Fed? Biden’s popularity is low, and political pundits tell us that the Dems may lose both the House and the Senate in the mid-terms. Consider this: only ~50% of all Americans own shares directly (not counting shares that pension funds may hold on their behalf), but the wealthiest 10% of the population own more than 80% of all publicly traded shares.

Inflation, especially in things like food and shelter, is a HOT political issue, and it hits “non-shareholders” far harder than it hits “shareholders.” Given that there are a “LOT” of voters who don’t own any shares, the Dems current political calculus might be, “kill inflation, even if it means the stock market takes a hit.”

I began this week short WTI and long Euro, but I was stopped for small losses on both early in the week.

I began shorting the stock market on Monday, creating small gains and losses. On Tuesday, I shorted both the Nasdaq and the S+P. I covered the Nasdaq late Tuesday for a small profit; but stayed with the S+P until Thursday, earning ~100 points.

I bought the Euro after the employment report Friday, looking for it to rally out of the sideways range it has been in for the past six weeks.

When I was the currency analyst for Conti (a large, Chicago-based commodity brokerage firm) back in the 1980s, I thought it was important to know “why” currencies traded the way they did. I paid attention to price action but the “why” seemed more “sophisticated” and “informed.”

These days, I still pay attention to “fundamentals,” but I think important things happen in the markets that I don’t know anything about or don’t understand. To quote Donald Rumsfield, the “unknown unknowns.”

Therefore, while I can’t seem to shake the habit of trying to know/understand “why” a market is moving the way it is, I only put my capital at risk when I can find a “setup” in the price action that works for me.

A subscriber asked me a question last week about how I trade. Here’s my (edited) reply:

I will stay with a trade longer if it keeps working (price action supports my opinion of where the market may be going.) I will NOT stay with a trade that is not working because I think (hope) it will “eventually” start working!

I will continue to move stops higher (in a rising market) to levels that “make sense” (for instance, if the market has risen to level X, I will now want to be out if it drops below level Y.) I will NOT move stops based on a dollar amount of risk, and I always reserve the right to sell at the market if I think the rally is over or, if the market has surged higher, I want to capture that windfall and/or I believe I can reload at a lower price.

I think of stops and trailing stops as “insurance” (protecting against capital loss) rather than the optimal way to exit a trade.

(In an attempt to try to stay with trades longer) I may experiment with taking multiple positions – treating some as short-term trades and the others as long-term.

The reason I want to try to stay with winning trades longer: I didn’t have any BIG wins last year (which is unusual), and I think an occasional BIG win is necessary to balance off a lot of small losses/small wins.

I may be wrong about that. Perhaps I can continue to grind out a living by having a win/loss ratio of ~50% but with my winning trades averaging ~3X the size of my losing trades. That may fit my “personality” better – but who doesn’t want to have the occasional BIG win?

Quotes From The Notebook

My Comment: I wish I could be more like that, but I’ve seen a lot of people “go down with the ship” when they had a great idea – that either turned out to be dead wrong, or they had their timing wrong on the trade. For my short-term trading, I will only stay with a trade that is showing positive results.

I’ve made a few longer-term bets that have worked out very well. For instance, I switched about a third of my net worth from CAD to USD when the CAD was above par. I stayed with that trade for several years and gradually unwound it as CAD fell. I hope to make more trades like that in the future!

“The whole case for the stock market today is that it is cheap relative to interest rates – and rates are priced in a distorted fashion.” Alan Fournier, in an RTV interview with (the one and only) Jim Grant December 2017

My Comment: Well, ain’t that the truth! And if it was true then, it’s even more true now.

My Comment: Exactly! If your trading time frame is out-of-sync with your analysis time frame – you’re going to have problems!

The feeling you get when you’ve been out having lunch with the boys – come back to the office and discover that the “New Kid” is sitting at your desk!