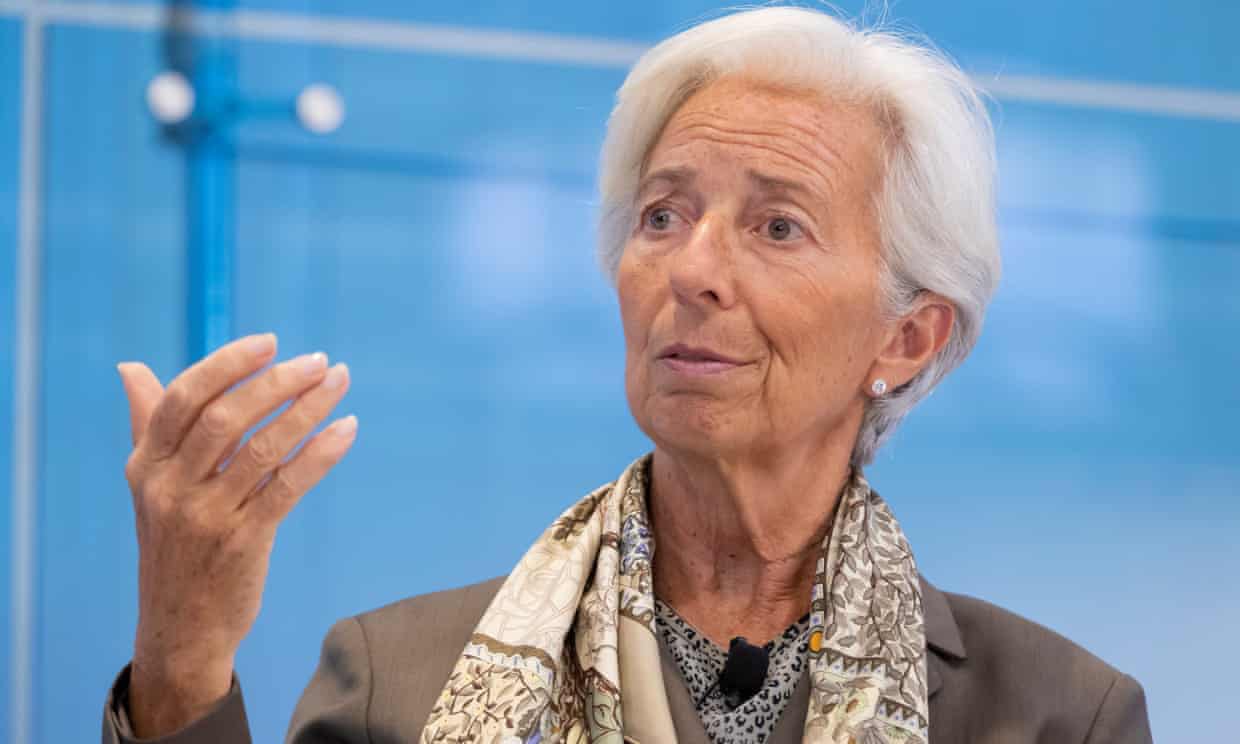 Christine Lagarde surprised markets Thursday by opening the door to higher interest rates this year from the ECB. On Friday, markets were stunned by an unexpected (and suspect, given the massive “seasonal adjustments”) US Employment report. The net result? Interest rates everywhere surged higher this week.

Think of Euribor as the EUR equivalent of the Eurodollar interest rate contract. This dramatic tumble has a HUGE “rate of change.”

Even Japanese bond yields traded to 5-year highs. (Remember the “widow-maker” trade? For years, traders made big bets on Japanese yields rising – but they got “carried out” fighting the BoJ.)

Markets are currently pricing at least 2 x 25bps bumps from the ECB this year. German bond yields are back above zero for the first time in 3 – 4 years. All European sovereign yields have spiked higher, and spreads against Germany have widened. On Thursday, the Bank of England raised s/t rates 25bps, but the ECB stole the show.

The shocking “rate-of-change” is probably more important than the net change. On January 15th, I asked if the surge in rates following the Fed meeting was Peak Fed Hawkishness or A Minsky Moment. I defined a Minsky moment as a “sea-change at the Fed, and you ain’t seen nothing yet!”

Right now, it looks like the Minsky horse is ahead by 20 lengths.

Not only are interest rates everywhere rising, but credit spreads are widening – weaker credits will have to pay much more to borrow money.

Positioning: It looks like everybody is already short of the US Treasury bond market.

The surprise move by Lagarde and the subsequent surge in Eurozone interest rates saw the Euro currency rally hard against all other currencies.

The Euro against the USD.

The US Dollar Index hit an 18-month high last week as markets expected Fed policy would maintain a substantial interest rate premium over other countries. That changed Thursday when ECB surprised markets, and the EUR had its biggest one-day gain in years.

The Canadian Dollar has been surprisingly weak the past couple of weeks – given the strength in crude oil (Western Canada Select in nearly CAD$100 BBL) and the recent weakness in the USD. Perhaps the CAD is struggling in a “risk-off” environment.

The wild intra-day and inter-day swings that we saw in January continued this week, with the DJIA swinging >2,500 points from last week’s low to this week’s high. The DJIA closed ~360 points above last week’s close at the end of the week. And, ICYMI, Facebook had a bad week.

Facebook reported after the close Wednesday. By Thursday, the stock was down ~27% for a market cap loss of ~$230Billion.

This chart was dated Wednesday when the DJIA was up ~2,400 points from last week’s lows.

WTI crude oil traded above $93 this week – an 8-year high – up ~50% from the beginning of December. Prices have climbed for seven consecutive weeks. Energy share indices outperformed the S+P by ~24% in January – the widest monthly gap in over 40 years.

Rising geopolitical tensions are contributing some “fear” premium to the crude oil price, but the ESG inspired “Consequences of Procrastination,” which have created self-destructive energy policies in much of the Western World, are the real driving force behind the energy rally.

China hosts the Olympics from February 4th to 20th. Geopolitical stress may increase after the Olympics are over. Remember, Russia annexed Crimea immediately following the Sochi Olympics in February 2014.

Covid has disappeared from the market’s rear-view mirror

Covid had a HUGE impact over the past two years, spurring massive monetary and fiscal stimulus, lockdowns, social tensions, supply chain disruptions, and HUGE gains in the leading stock indices. But markets are looking ahead.

The Bullish case: The pandemic policies that have crippled the economy will soon be over, and the re-opening economy will be robust. Interest rates rising 1 – 2% will not be a headwind. Inflation has peaked, and the recent correction has been healthy. The indices will rebound as capital “rotates” to stocks that prosper in the new economic environment. There are trillions of dollars on the sidelines (that could come into the market), potentially massive corporate buybacks, and passive flows (now more than 50% of total flows) will continue – where else can capital go? TINA.

The Bearish case: The HUGE gains in 2021 were an anomaly. The bubble has already popped. The perpetual motion machine finally ran out of gas, and speculators are exhausted. For the past several months, the indices have trended higher on the back of Big Cap stocks while breadth deteriorated. ARKK, an example of speculative excess and poor risk management, has fallen 50% in the past three months. The sea-change in Fed policies in late 2021 marks the top of a 12-year bull market that went parabolic on easy money, TINA, FOMO, corporate buybacks and Passive inflows. The Fed will be tightening into a slowdown; it will not cool inflation, and stagflation will result. Emerging markets have been in a bear trend for months.

I bought the S+P mid-day Friday of last week, and, with the market surging higher into the close, I stayed long over the weekend. The market was strong early Monday, and I sold the position to gain ~80 points.

I frittered away about 30 points Tuesday, Wednesday and Friday, taking quick losses on short positions. At the end of the week, I was flat, and my P+L had a net gain of ~0.50%.

This week, I had several real-world “distractions” and never got “in sync” with the market action. That’s life, but I was whimpering to myself that I need to be more disciplined – I need to get my priorities straight and not allow real-world events to distract me from trading. Fat chance of that happening. Luckily, a good friend reminded me, yet again, that there’s a rumour going around that markets will be open again next week.

I expect dramatic rotation within the market. A ton of money is trapped in stocks that suffered HUGE declines, and it is now “dead money.” The indices fell 10 -15% from the January highs and have bounced back ~50% of that break. I expect the bounce to run out of steam and roll over before reaching the January highs. If a bear market has begun, I expect to see nasty bear market rallies ahead. As Richard Russell used to say, “Everybody loses money in a bear market.”

One of the best things about writing this blog is that I get fantastic emails from people I’ve never met. Here’s a brief quote from a subscriber:

“One Comment that really had an impact on my trading came from an extremely successful trader from Europe who spent ten years at a brokerage before trading his own account. He said, “After watching thousands of you guys make tens of thousands of trades over ten years, there’s one thing that jumped out at me: You LOVE to pick tops and bottoms! Whereas the guys with the multi-million-dollar accounts wait until the trend is so obvious they just have to pick up the money.”

I like that quote because it reminds me of something I used to say – something that I learned from being in the brokerage business for over forty years. My quote:

“Over the years, I’ve watched 100s and 100s of clients lose millions and millions of dollars. One of the things they all had in common was that, sooner or later, they decided to let a losing trade have “a little more time.”

Keep the time frames of your analysis and trading/investing in sync. It is SO easy to develop a multi-year macro investment idea, put on a trade, have it go against you, and then you have to wait years for your vision to materialize. Be patient. Focus on “when” to put on a trade, not “why.”

“FOMO leads to chasing – be patient; if you don’t have a good setup, don’t trade.” Tyler Bollhorn at the World Outlook Financial Conference, February 2022. Tyler was responding to Mike Campbell, the conference host, asking the closing panel for advice on avoiding losses / managing the risks of trading or investing.

My Comment: I agree 100%! Tyler and I kicked the idea around later, off-camera, and we both decided that it’s SO easy to see something developing – and you “have” to get on board even if it means not having a good setup – and then when the market starts going the wrong way you’re playing defence short-handed!

“Wait for your setup, and then pull the trigger. Don’t chase it if you don’t take the trade when you should. You MUST learn to stay on the sidelines in that case. There will always be another trade.”

“Fear of losing causes you to not trade when you know you should (the hard trade.) FOMO causes you to chase. Fear of having made a bad entry by chasing leaves you at risk of being shaken out early.” Peter Brandt RealVision September 2019

My Comment: Peter and I both worked at ContiCommodity in the late 1970s, but I never met him back then. In 1981 he started working for Commodity Corp, a prop trading firm. A few years later, he went out on his own and has made his living ever since by trading his own accounts. (He tried managing money for friends one year and hated the fear of losing other people’s money, so he stopped.)

Peter and I swapped many emails the last few years and finally had a wonderful face-to-face visit in Tucson in 2019.

I think it’s perfect that Tyler and Peter both offer essentially the same advice. It’s worth listening to people who have learned their lessons the hard way.

The “Barns” is getting bigger and stronger – and more imaginative. He’s just a week short of five months old. We make a point of getting him out for at least two walks a day, regardless of the weather. He has well and truly upset my previous daily routines, but I love the little guy! (This abandoned railroad near our house makes a terrific off-leash track.)