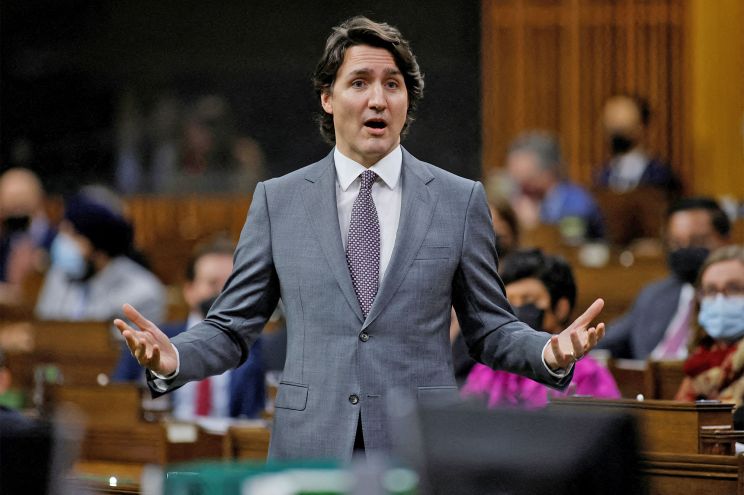 Interest rates have steadied after surging higher since November

Mortgage rates have increased sharply as bond yields have spiked.

One of the reasons mortgage rates have been rising, other than interest rates spiking, is that demand for mortgages is WAY up.

Interest rates for bank deposits haven’t increased much, but if/when they do, it will be interesting to see if people stop “reaching for yield” the way they have been.

Stock markets were under pressure again this week

The DJIA, the S+P and the (much broader) Vanguard Total Stock Market ETF had their lowest weekly close in over six months.

Classic 60/40 portfolios are not doing well YTD, with both stocks and bonds down.

With stocks down, interest rates rising, inflation and geopolitical tensions, it’s no wonder bulls are pulling in their horns.

Here’s what Fund Managers worry about:

WTI crude oil futures steadied this week after rising 9 of the 10 previous weeks, up >50% from December lows

Geopolitical risk is giving energy markets a lift. Still, the BIG story is that rising global demand is gobbling up supply while spare production capacity shrinks thanks to chronic underinvestment in developing new reserves. And then there’s the ESG factor.

The “geopolitical risk premium” in crude oil markets has driven the time spreads to historical wides.

I’ve read every weekly issue of the GOLD MONITOR, published by my friend Martin Mureenbeeld, since 1992. Gold producers and institutional investors around the world subscribe to his service. If you are seriously interested in gold you can sign up for a free trial on his website.

In this week’s letter Martin notes that, “gold has clearly broken away from the dollar and interest rate factors, confirming that the overriding determinant of gold just now is geopolitical. The Russia/Ukraine crisis may have added some $100 to the price of gold to date. This will be much larger in the event Putin chooses to invade (a typical rise translates into $180 today!) Gold will sell off quickly in the event Putin backs off.”

Gold shares have underperformed bullion for months but have jumped relative to the S&P this month.

The USDX hit an 18-month high in January but couldn’t sustain those gains.

The Canadian Dollar started to rally with WTI from the December lows but ran out of gas. Perhaps the risk-off tone in American equity markets put a damper on the CAD.

FOR THREE WEEKS, the CAD stayed in a narrow range between 7825 and 7900. The CAD has not reacted to the draconian Emergency Measures Act instituted by the Federal government this week. I’m assuming the market thinks this policy will be very narrowly focused and will quickly “blow over.” However, suppose that is not the case. In that event, I expect to see capital flight from Canada to the USA (which will be seen as the “Switzerland” of North America by worried Canadians) and substantially less Foreign Direct Investment in Canada.

You have to wonder if the boy wonder did a cost/benefit analysis before he made his draconian announcement. Not likely.

The following is my Valentine’s Day Tweet following the announcement of the Emergency Measures Act:

I’ve been a huge Mordecai Richler fan for decades. I’ve read “Barney’s Version” six times and watched the movie several times. (Yes, I named my dog after Barney.) If Mordecai were alive today, he would be ripping into the Federal Government with a venomous pen. Nobody could do it better!

Several years ago, when I was hosting the Moneytalks radio show, I referenced an article I’d read in the newspaper which quoted a person described as an “activist.” This person was determined that people agree with her vision of how the world “should” be.

I explained to my listeners that anytime I read an article that cites an “activist,” I automatically substituted the word “busybody.” My grandmother used the word “busybody” to describe people who thought they knew best about how other people should spend their time and money.

When covid came along, I realized it would be a busybody’s wet dream. They would feel morally justified shrieking at other people about how they should behave.

It turned out to be way worse than I imagined. The busybodies were everywhere and lusted for the authority to enforce their views. Many of the busybodies held elected office and did what they could to make other people do what they thought was best.

No wonder we’re seeing a magnificent decline in people’s respect for (or confidence in) government. This loss of confidence will change the world as we know it; the trading opportunities will be extraordinary!

I started this week short S+P futures from last week. I had stayed short over the weekend because the market had been down hard Thursday and Friday, and I thought it would likely fall further this week.

The market was lower in the Sunday overnight session but rallied ahead of the Monday day session, so I covered my position for a gain of ~85 bps.

As you can imagine, I was mumbling to myself about having my stops too tight in a choppy market. But at the end of the week, I was flat, and my P+L was up ~0.55% for the week.

I looked hard at buying bonds and shorting stocks Friday. I didn’t make either trade because they were FOMO motivated, and I didn’t have a good setup. I would have been “making a bet” on things getting worse in Ukraine over the long weekend (once the Olympics were over.)

I cannot handicap the existential Ukraine crisis. If it gets worse, stocks will probably fall, and bonds will likely rally (as will gold.) But protecting my capital by not “making a bet” was the right thing to do.

“A good deal of selling takes place because people like the fact that their assets show gains, and they’re afraid the profits will go away.” Howard Marks, in his Selling Out Memo, January 2022

My Comment: I’m a big Howard Marks fan; I read his book, The Most Important Thing – Illuminated, twice. You might think it odd that a short-term futures trader would take an interest in a value investor who holds positions for years. Still, he is a hugely successful investor with 50 years of experience – and I like his way of looking at markets and people’s behaviour. I’ve read his monthly memos for years. I recommend him to you.

“There is tons of talk (about) how Central Banks have lost control of inflation expectations – nothing could be further from the truth. Markets still have complete confidence that Central Bankers will control inflation in the coming quarters.”

“So far, the market believes we have experienced a cyclical inflationary upswing within a secular dis-inflationary environment. At some point, market participants will realize that we are not going back to the post-Volcker-pre-COVID world. When that happens, the repricing of assets will be fierce and brutal.”

“Watch for this shift. It will likely prove to be the inflection point for a whole new investing environment.” Kevin Muir, THE NEXT INFLATIONARY INFLECTION POINT The Macrotourist February 2022

My Comment: I lifted this quote from Kevin’s latest piece on his Macrotourist subscription service. I read ALL of his pre-subscription essays over four years and became a paid subscriber when he went behind a paywall two years ago. His service is worth every penny. I highly recommend him to you.

If I could paraphrase his message, it would be: The market expects the Fed to tighten (bonds, for instance, are NOT in free-fall because the market expects that Fed tightening will rein in inflation) but eventually, the Fed will “waffle” (will NOT keep tightening when they should) and then long-term higher inflation expectations will (really) kick into gear – and we will enter a whole new investing environment.

The “Golden Boy” has Papa wrapped around his (not so little) paw. I love taking him places to “run wild” and have a great time. When we come home, he laps up a bowl of water and falls dead asleep. This is the look I get when he thinks it’s time for me to take him for another long walk.

I’ve had a regular weekly spot on Mike Campbell’s extremely popular Moneytalks show for the last 15 years. The February 19 edition is available at: https://mikesmoneytalks.ca

I also recorded a 30 minute (This Week In Money) podcast on February 18 with my good friends at Howestreet.com.