Traders – Time is Right To Buy This ETF 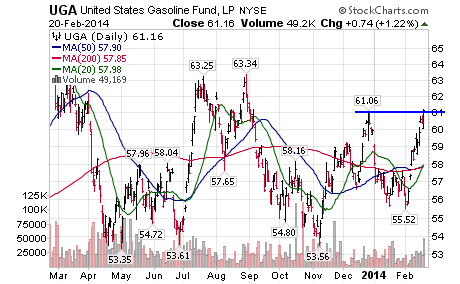 Gasoline prices are hitting their ‘sweet spot’. Boost your exposure with this ETF

Gasoline prices traditionally move higher from the end of January to the end of May. What are prospects this year?

Gasoline prices move higher during their period of seasonal strength mainly because of two annual recurring events. North American refiners switch their production from heating oil into gasoline for the summer driving season. During this period, production temporarily is shut down and inventories drop. In addition, refiners normally complete their annual maintenance during the conversion period. If something is going to go wrong, it usually happens during the annual maintenance period. North American refineries are old and require an increasing amount of maintenance.

The “sweet spot” for wholesale U.S. gasoline prices is from the end of January to the end of April. The trade has been profitable in 16 of the past 18 periods including nine of the last ten periods. Average gain per period during the past 18 “sweet spots” was 16.8 per cent.

Prospects for an upside move in gasoline prices this year are above average despite a decline in demand due to the improving fuel efficiency of North American autos. Feedstock for gasoline is crude oil. Crude oil prices already have increased by almost 5 percent since the end of January and established an intermediate uptrend earlier this week. On average, crude oil prices during the past 20 periods from the end of January to the end of April have increased 10 per cent. In addition, a colder-than-average winter will prompt refiners to postpone timing for conversion from heating oil production to gasoline, thereby increasing the possibility of a gasoline shortage this spring.

On the charts, wholesale gasoline prices at $2.85 (U.S.) per gallon and their related ETF have a positive technical profile.  Yesterday, the ETF broke above resistance on higher than average volume to reach a six month high. Last week, gasoline moved above its 20, 50 and 200-day moving average. Strength relative to the S&P 500 index turned positive at the beginning of February.

A direct way to invest is through the United States Gasoline Fund, LP (UGA), an exchange-traded note based on gasoline futures and short term notes.

Ed Note: Don’s Monday report is highly recommended to read/scan, as it lays out all of the economic news for the week and analyses 45 different markets and charts.