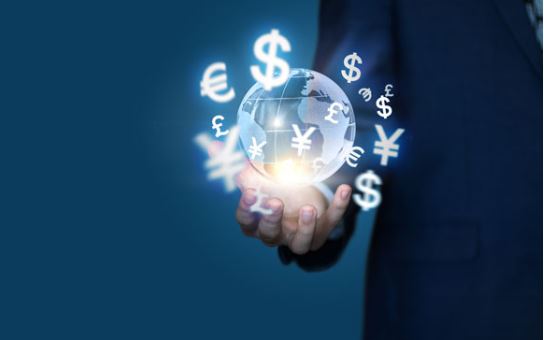 Global financial markets continue to face ongoing uncertainty surrounding U.S.-China trade tensions, slowing global economic growth, yield curve inversion, and central bank policies. Despite all the uncertainty, markets remain resilient and this is a sign of strength. Let’s look at trade tensions and their ripple effects on the economy and how central banks are collectively combating the global economic softness.

U.S.-China trade tensions continue to be a key area of uncertainty for the markets. Since implementation of the first tariffs back in July 2018, a pattern has emerged in the trade war saga. A picture is worth a thousand words and the Trade War Cycle illustration below captures succinctly the repeating pattern witnessed by investors over the last year. This chart provides a simple mental model for tracking the trade war situation amid all the noise, and more importantly, gives us a way to detect deviations from the current cycle of behaviour.

We remain of the view that trade tensions will be prolonged due to deeper issues surrounding technology, although there is hope of an interim deal in the coming weeks or months as high-level trade delegates from both countries are expected to resume discussions in October. As a gesture of good faith leading up to October, the U.S. has delayed putting tariffs on certain Chinese goods (electronics and clothing) until December 15th and China has begun to purchase soybeans and pork from U.S. companies. But don’t hold your breath, we have seen this movie before. 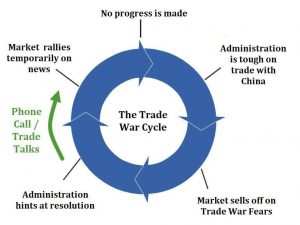 The ongoing trade tensions between the world’s largest two economies have no doubt weighed on global economic growth and business confidence. The global manufacturing sector (as tracked through Manufacturing PMI) has seen weakening data, especially in Europe, and companies have delayed or reduced their investments in capital projects due to trade uncertainty. Companies have also begun shifting a portion of their production capacity away from China by setting up factories in neighbouring countries, such as Vietnam and Indonesia.

However, the manufacturing sector does not represent the whole economy. In most developed countries, and increasingly more so in China, the services sector is a significant driver of the economy. The good news is the global services sector (as tracked through Services PMI) is holding up well. Furthermore, unemployment rates in North America remain at record lows and consumer spending is still strong.

So why is there a time lag between initial yield curve inversion and a recession? There are two main reasons. First, when the yield curve inverts, financial conditions tighten because it’s not profitable for banks to borrow money under short-term rates and lend out under long-term rates. But banks don’t stop lending overnight, financial conditions tighten over time. Underneath the hood, credit spreads (an indicator of company defaults) are still tight, meaning the risk of defaults is relatively low. In addition, U.S. initial jobless claims remain stable. A spike in initial jobless claims could signal trouble in the labour market, which eventually impacts consumer income and spending. Second, when the yield curve inverts, central banks generally step in to lower short-term interest rates in an attempt to stimulate the economy. This is exactly what is happening now and lowering the cost of borrowing can generate a positive impact for the markets.

The playbook in this bull cycle has been “Don’t fight the Fed”, meaning invest in a way that aligns with the current monetary policies of the U.S. Federal Reserve (and global central banks). When central banks are lowering interest rates (in easing mode), it can provide a powerful tailwind for businesses and the markets.

Case in point, the U.S. Fed cut interest rates by 0.25% to the 1.75%-2.0% range on September 18th and there is a 70% chance of another 0.25% rate cut by year-end*. The European Central Bank (ECB) also lowered rates further into negative territory on September 12th and relaunched quantitative easing (QE) of 20 billion euros per month (with no end date). For now, the Bank of Canada (BoC) and Bank of Japan (BoJ) have kept interest rates unchanged in their latest meetings.

In summary, financial conditions continue to remain relatively healthy and inflation is under control, allowing central banks to be accommodative while waiting for a resolution on trade tensions. No doubt, a U.S.-China trade deal would be a positive catalyst for re-accelerating global growth.