“Trade of the Decade” Takes Flight 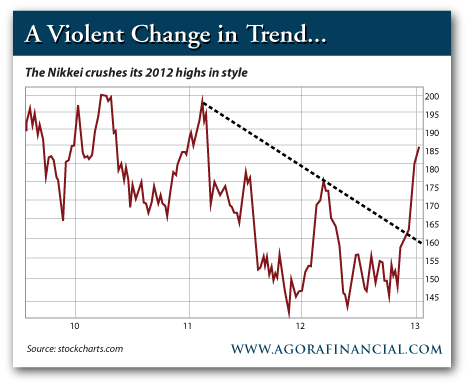 Japanese stocks have been an absolute Dumpster fire for more than two decades.

Every peak stalled lower than the one before it. And unlike U.S. equities, Japanese stocks did not climb out of the 2008 financial crisis with any efficiency. In fact, the Nikkei would need to almost double from here if it were to top its 2007 highs.

Yet despite its recent history, something is different in Japan right now…

“It’s the most interesting market — technically — in the world…this is for real.”

That’s Barry Sine talking. He’s the director of equities research at Drexel Hamilton — and he’s known for using a combined approach of both technical and fundamental indicators to fuel his work.

Barry’s noticed a change in the Nikkei recently. He’s not alone. Volume has flooded into Japanese stocks as they have moved steadily higher for the past nine weeks: It has been nothing short of a bullish reversal of epic proportions for Japanese stocks. A sharp downtrend was abruptly reversed as the Nikkei takes out its 2012 highs. Now its post-financial crisis highs are just a stone’s throw away…

Japan should already be on your radar. As a matter of fact, Bill Bonner mentioned it in his new trade of the decade all the way back in early January 2010.

“Let’s see, what has been beaten down, dissed, battered and abused for the last 20 years or more?” Bill mused three years ago this month. “What is it that people don’t want? What is it that they expect to go down…possibly forever?”

A bull market in Japanese equities is coming. Get ready…the most interesting market in the world is primed for gains in the coming weeks and months. Rude Trends
When to Buy… When to Sell

Stocks are riding high. But it’s time for a (short) break.

The key here is patience. A little reversion to the mean will do this market some good. Not only that, but it will give sidelined investors a better buy zone. If and when stocks retreat, we can watch for bullish bounces off the short-term moving average to offer us ideal buying opportunities.

Remember, we don’t like to see the market travel too far too fast. Keep a level head and don’t chase this week.

Ignore At Your Own Peril
Today’s Must-Read Links