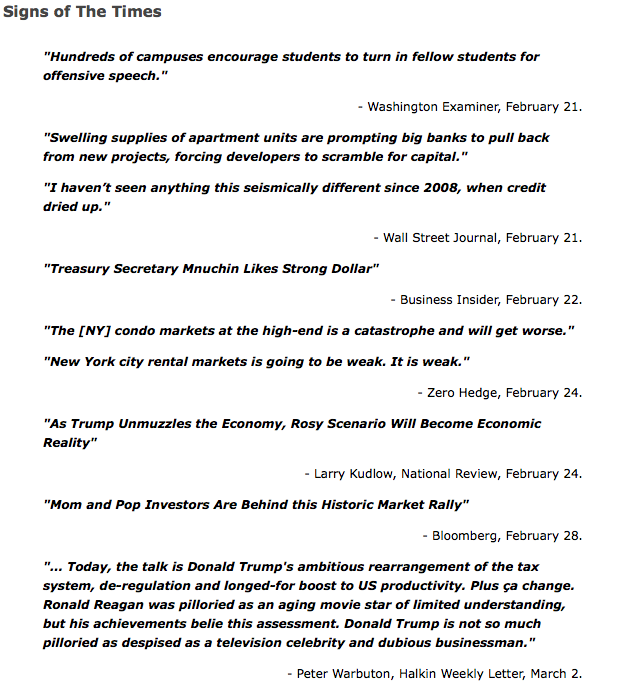 The following published for our subscribers March 2, 2017. What a range of headlines!

The first one about “informing” is right out of Totalitarianism 101, common to both international or national socialism. The one about banks pulling back from lending to condo developers reminds of Mises’ view on a contraction. At the top, the banks don’t have to call the loans, they just become nervous and stop making them. Then there would be the reversals in the credit markets.

Mom and Pop are in the stock market and Kudlow is writing about “Rosy Scenarios”.

The question is not about can it get any better?

It is about how long can it stay wonderful?

Since November our theme has been “Rational Exuberance”, discounting the change from anti-business to a pro-business administration. Quite likely the most exciting such change in US history. But last week we concluded that with the action becoming sensational, “Rational” is no longer part of the theme. But “Irrational” seems not yet at hand, leaving us with “Exuberance”.

This, for example, has driven the Weekly RSI on the DJIA to 81, which is getting up there. But can be seen in previous strong advances out of a deflated condition. That was ending a year ago.

And how long can this phase run?

We will stay with the theme that the “good stuff” could run into March.

Industrial commodities, particularly crude, have been expected to be firm into March, providing support for the stock markets. However, the firming dollar could constrain further advances.

The other carrier of the good times has been narrowing credit spreads which have been likely to be a positive into March. The action is somewhat overbought, but March is not over.

The rise is encompassing most sectors and is becoming outstanding. This form of outstanding action can run until momentum takes a break. Also, there is the indicator attendant to extremes, and that is the “Hindenberg”, which has yet to register.

The February 16th ChartWorks outlined the possibility of an “ABC” type of correction. This would follow the completion of the momentum move. As noted, that would be signaled by the S&P taking out the 12-Day ma.

We used some seasonal influences to carry us this far in the rally. At times, the NYSE Margin Debt can guide and Ross has taken his thorough approach. The series is available from 1962 and the observation is that with the latest report at record highs the NYSE rally has further to go. The key will be a downtick in Margin combined with a MACD “Sell”.

Nice to have another technical tool.

The DX got overbought at 103.85 at the end of December, which was within the ChartWorks long-term “model”. A correction was possible and we have been looking for the DX to base with the 20-Week ema. This was the case at the start of important rallies in 2014, 2015 and 2016.

The exponential moving average has based and is turning up. The DX has been staying above the line, which is constructive. Breaking above 102 is the next step, which was accomplished today. Above the last high at 103.85 and the uptrend will have resumed.

The Canadian dollar has weakened. And given the technical arithmetic, the 20-Week ema has guided the swings down. This began following the peak with commodities at 106 in 2011.

This week, the C$ slipped below the ema. It may take some work to fail, but the long-term trend is down.

Our February 9th Pivot reviewed that rally and noted that the gold stocks were not outperforming the bullion price. A correction for the sector was possible.

The decline is down to 35 on the Daily RSI. Close to 30 would be oversold enough to end the move.

What prompted our concern was that HUI/Gold reached a high in early February and rolled over. We will be watching for the next low.

The gold/silver ratio has suddenly become volatile which often precedes a change in the financial markets.

Rising through 71 will set the uptrend and that would suggest a significant setback in the credit markets.