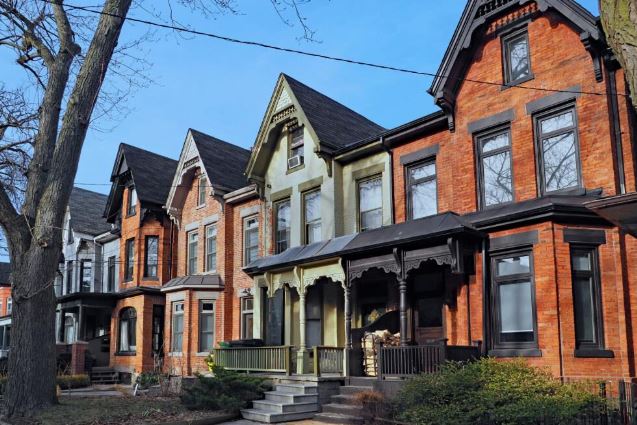 The Greater Toronto market has experienced a prolonged uptrend which has propelled prices up 127% since 2010. The aggregate average sales price had initially peaked in 2017 at $920K (125% Growth over 7 years), with June 2020 recording a $930K price. These two data points are seemingly creating a double top for the GTA real estate prices. 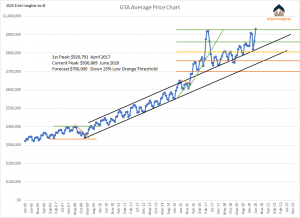 The first break in the armour was the rapid uptrend (green line) established in 2016, which rose prices over $290,000 in a year and a four months. That uptrend broke in 2017. The rapid uptrend was not sustainable growth rate, prices subsequently retreated back to our forecasted higher echelon of the lower threshold $750K during the end of 2017 and into 2018.

Eitel Insights analytics is noticing a double top is forming in the GTA prices. After the creation of the first peak in 2017 with current prices representing the second peak. After peaks comes valleys, the GTA has remained in an impressive uptrend since the market took a temporary pause in 08-09. That uptrend (black line) is about to encounter a serious test which will cause market volatility.

Prices will begin to search for their market cycle lows, just like every other market cycle previous. The chart has identified a few pricing thresholds that will be tested in the upcoming months and likely years. Eitel Insights anticipates the market bottom to occur and create a channel which the market will remain likely until 2025.

With a double top forming in the price chart, we next take a look at the supply demand factors. Inventory has seen the bottom during December 2016 with only 4700 active properties. The most recent bottom came during 2019 with over 7400 active listings. Still well below the 15 year average of 17,800 actives, but a higher low none the less. Equally as important, the data is officially breaking the downtrend that had been in play since 2013 signalling that trend has completely come to its end. Going forward we anticipate inventory to continue in an uptrend meaning with higher lows and higher highs in the reported data. 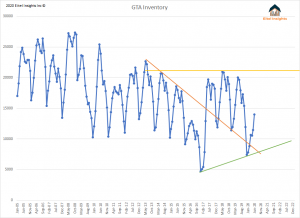 The magical number of 21,000 active listings which hasn’t been broken in the past 7 years, will eventually relent in the upcoming several quarters. Inventory had been getting sold in record time and record money in years previous, this in turn has kept the inventory a nominal levels, while increasing the asking price.

The sales chart demonstrates there has been less demand at current prices, a trend which has been developing seemingly unnoticed by most. Sales are not low in 2020 solely due to Covid-19. No, they have been trending lower since 2016. In fact sales have not remained above 10,000 since 2016. June 2016 had over 10,000 sales and the month ended with 12,000 inventory. Since then inventory levels have surpassed 19,000 each summer with ease, however the sales have not risen above 10,000 since, with one data point being the exception during 2017. That signals to Eitel Insights, increasing demand to sell with decreasing demand to buy. 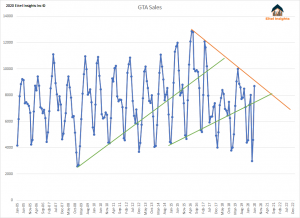 Demand has waned. Up next anticipate an increase to the supply without nearly the amount of a buyer as years previous. This upcoming reality inevitably creates competition amongst sellers, which in turn, leads to lower asking prices. As with any cycle, the overheated frenzied activity eventually ends, and gives way to a whole new kind of chaos on the other end of the spectrum.

The condo market in particular will see a chaotic atmosphere, as newly completed properties begin to enter the GTA market in 2021 and predominantly in 2022. The flood of inventory that is on the horizon is eerie enough, throw in the investor market that hasn’t received rent since Covid-19 hit and cannot evict the tenant going through the proper channels until who knows when. Once the investors do get their properties back, selling will be on the mind. Unfortunately this example will occur by the hundreds, and the market will flood with new and older inventory.

The historical chart is calling for a similar market cycle to the one that occurred from 1989-2002. After a 4 year uptrend prices shot up 167% to reach the all-time high of $261K in April 1989. After peaking the search began for the market cycle bottom, which occurred multiple times throughout the 11 year price channel. 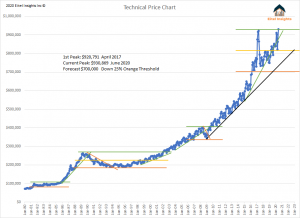 Eitel Insights is not calling for an 11 year channel, however we are stating that the market cycle began in 2017. 3 years later and the current data is simply confirming the previous high, as time marches on prices will begin to work their way lower and find that market bottom. We are forecasting a 24% correction, indicating prices will test the $700K threshold in the upcoming years. The bottom will likely occur in 2022, once the inventory has flooded the GTA.

Not all markets in Canada are created equal, some areas are closer to the bottom. While others still have significant percentage losses upcoming. Become an Eitel Insights client to find out which are which.