Posted by Jocelyn August via Brian Sylvester of The Energy Report 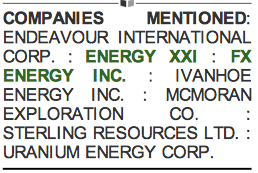 Catalysts are a little like earthquakes: They shake things up. These announcements of drill results, production starts and resource estimates can influence stock prices, sometimes for the better, sometimes for the worse. In this interview with The Energy Report, Jocelyn August, senior analyst and product manager for Sagient Research’s CatalystTracker, explains which catalysts have the biggest effect on small- and large-cap companies and identifies upcoming events that could move the needle in the oil and gas and uranium spaces. The Energy Report: Compared to oil and gas, do you think uranium is the best place to be among the small-cap energy commodities?

Jocelyn August: Not necessarily. Oil and gas is also an interesting space, particularly the small caps. Just in the last six months, there have been a lot of catalysts in that area. The large institutional investors are investing a lot in oil and gas and not in uranium.

TER: What are the most important catalysts for larger companies?

JA: Generally, earnings announcements, drill results, production decisions and go/no-go decisions. Anadarko Petroleum Corp. (APC:NYSE) and the Tweneboa-Enyenra-Ntomme (TEN) cluster is a good example. A production decision there will help it a lot. Another good example is Noble Energy Inc. (NBL:NYSE) and its Leviathan project in Israel. Announcements about that are big movers simply because of the project’s size.

TER: What are some patterns among large, private institutions investing in energy equities?

JA: During H1/13, private institutions invested in oil and gas and in alternative energy. There’s not much investment in the uranium space.

TER: What are the top catalysts for small-cap energy equities?

JA: Drill results, with about a 9.6% average stock movement, are number one. The second is the announcement of further drilling on a currently producing site; those announcements move companies about 8.8% on average. For smaller companies, the announcement that drilling is beginning brings 8% on average. Production starts are number four. They’re 7.5% for the small companies, but they generally don’t move the stock much for the larger energy stocks because they’re already baked into the stock price. Third, we notice that large movements occur around announcements of investments by a strategic partner or investment bank. That creates an average stock price change of about 8.5%. The last one is an earnings announcement, which moves prices almost 6% on average.

TER: Is the percentage of movement similar for small- and large-cap energy equities?

JA: Generally, the larger a company is, the less it will move. Percentagewise, stock prices move a lot more for those under $500 million ($500M) than for those over $500M. And the ones over $5 billion ($5B) won’t move very much.

TER: It will cost almost $60B to clean up the site of the Fukushima Daiichi nuclear disaster. Do you think news of that will push uranium equities prices even lower?

JA: Japan’s election of a new prime minister, who is a known proponent of nuclear energy and has plans to accelerate the startup of currently offline nuclear reactors, is positive news for the uranium industry. The amount of money it will take to clean up the Fukushima site is a negative, but we’ve had a shortage in the uranium supply, and there’s a rising demand for it. Weighing those factors, I think uranium is poised for an upswing. But companies that can keep their costs lower will be able to operate in all types of market environments.

TER: Do you see any catalysts in the uranium space beyond the election of the Japanese prime minister?

JA: In terms of specific companies, Uranium Energy Corp. (UEC:NYSE.MKT) has the Goliad project in Texas, which it expects to bring on-line soon, probably in August.

TER: That will add roughly 30 thousand pounds to its annual production?

JA: Yes, and its cash costs are estimated to be at $18/pound, which is good.

Lost Creek in Wyoming, which is Ur-Energy Inc.’s (URE:TSX; URG:NYSE.MKT) project, is expected to come on-line soon and to add 1 million pounds per year at its peak. The operation underwent its pre-operation inspection in June as required by the Nuclear Regulatory Commission.

TER: Ivanhoe recently put out a release saying that one of the First Nations in that area, the Mikisew Cree First Nation, wouldn’t object to the project’s development. Is an announcement like that a significant catalyst or just a nonfactor?

JA: It’s definitely a factor. We generally add that information to our coverage of the specific permitting catalyst. This project has been delayed significantly; the original date range was H2/12. Now it has successfully negotiated letters of nonobjection from four of the seven stakeholders who previously filed statements of concern, and it’s trying to resolve the final three statements of concern.

TER: Ivanhoe’s Tamarack is a heavy oil play north of Fort McMurray in Alberta, Canada, but a lot of investors have gotten out of the heavy oil sands plays. Would a catalyst for Ivanhoe have had more impact a few years ago than now?

JA: A couple of years ago, when the price of oil was higher, it would have had a larger impact. Investors have gotten out of the heavy oil plays because it costs more to get that heavy oil out of the ground than to get some of the lighter oil out.

TER: Would the approval of the Keystone XL pipeline be a big catalyst for Canadian energy plays?

JA: Obviously, you need some way to distribute the oil. Having more distribution options and another way to get the oil from Canada to the United States will help companies lower their costs.

TER: What small-cap gas names have some near-term catalysts?

JA: FX Energy Inc. (FXEN:NASDAQ) can have large-moving catalysts, whether positive or negative. FX had a positive catalyst in May. Good news on production tests at the Tuchola-3K well put it up almost 19%. A negative catalyst in July, some test results for Plawce, sent the stock down 15.5%. There were basically noncommercial levels of gas.

We’re looking for more drill-test results in the Fences area, where these are located, including those for the Lisewo-2 and Szymanowice-1 wells. We’re also looking for results this quarter from a couple of its wells in Poland.

TER: What other companies in the energy space with either near- or medium-term catalysts would you like to share with us?

JA: We have a couple of catalysts for projects in the North Sea. We have one for Endeavour International Corp. (END:NYSE.MKT) for the West Rochelle project. Its partners are Nexen Inc. (NXY:TSX; NXY:NYSE) and Premier Oil Plc (PMO:LSE). It had some problems with the Rochelle project; a big storm in February did some major damage to the first well, which was the East Rochelle well. Now, it’s working on West Rochelle. We expect a production-start catalyst this quarter for West Rochelle.

We expect Sterling Resources Ltd. (SLG:TSX.V) to have a production start for phase two of its Breagh gas project, also in the North Sea, in August.

TER: What other tips regarding catalysts for energy companies do you have for investors?

TER: You mentioned Anadarko and Noble Energy as being big companies with near-term catalysts. Any others?

JA: We’re obviously still looking for information on Davy Jones, which is a project of McMoRan Exploration Co. (MMR:NYSE) andEnergy XXI (EXXI:NASDAQ). It’s in ultradeep water in the Gulf of Mexico. We’re waiting for some flow-test results, which could happen as close as August, definitely by the end of the year.

TER: Would that be a production decision?

JA: It’s more a testing-result decision. It was so close to production and then had that blowout last year. At this point, we’re looking for information as to whether it can proceed. The flow-test results will be a deciding factor. It’s an interesting project because no other companies have tried to go that deep in the Gulf of Mexico; it has pretty big implications for that type of drilling.

TER: Leave us with one great piece of insight into this space.

Jocelyn August is currently the senior analyst and product manager for CatalystTracker, a proprietary research product focused on identifying and analyzing the future events that will materially impact publicly traded companies. In her five years at Sagient, she has developed expertise in the highly event-driven medical device and diagnostic sector. In addition, she spearheaded the development of a new Natural Resource Industry product within the CatalystTracker product line with the publication of the “Catalyst Impact Study: Natural Resources Sector.” Outside of Sagient, August was named the director of communications for the San Diego Professional Chapter of MBA Women International. August received a master of business administration from the Rady School of Management at University of California, San Diego, and graduated cum laude from the University of California, San Diego, with a bachelor of arts degree in sociology.

Want to read more Energy Report interviews like this? Sign up for our free e-newsletter, and you’ll learn when new articles have been published. To see a list of recent interviews with industry analysts and commentators, visit our Interviews page.