Too Many Bulls Out There – That Said….. 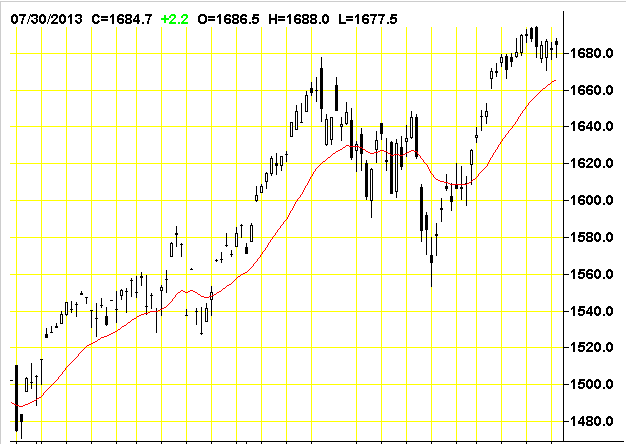 STOCK MARKET – ACTION ALERT – BULL – BUT THERE IS STILL CORRECTIVE RISK – TOO MANY BULLS OUT THERE AND I HAVE MY FINGER ON THE TRIGGER SHOULD A SELL SIGNAL APPEAR. THAT SAID, BERNANKE IS NOT LIKELY TO TRIGGER ANY PANIC.

Turnaround Tuesday triggered the anticipated rally try and today the world awaits word from ‘the man behind the curtain’. Bonds are selling off, investors are dangerously too optimistic, economic fundamentals remain at best questionable both here, in Europe and in China. Bottom line, though there are still higher technical targets in the major indexes, this is not a time to be betting on the long side except for trading purposes. I remain on a BUY signal only because a downtrend has not, as yet, been confirmed, but things could change quickly. My hunch is that a big downside surprise is on the horizon.

On Tuesday, the S&P notched its high at the open before spending the rest of the session in a steady retreat. The selling intensified during afternoon action, sending the S&P into the red as participants displayed caution ahead of tomorrow’s advance second quarter GDP report and the latest policy statement from the Federal Reserve.

The Conference Board’s Consumer Confidence Index weakened a bit in July, dropping from an upwardly revised 82.1 (from 81.4) in June to 80.3. TheBriefing.com consensus pegged the index at 81.6. The slight dip in confidence does not change the overall picture of an improving consumer base. The index likely fell back due to normal volatility after reaching a 5-year high in June. Furthermore, the University of Michigan Consumer Sentiment Index spiked to its highest level since 2007 in July, signaling that the drop in confidence was likely a non-event.

Separately, the May Case-Shiller 20-city Home Price Index rose 12.2% while a 10.5% increase had been expected by the Briefing.com consensus. This followed the previous month’s increase of 12.1%.