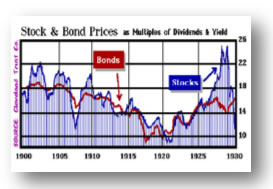 The period from now into January is the most reliably bullish of the entire year.
Back in the 1980s an analyst named William Lefevre studied market data from the end of World War II and found that the Dow had rallied an average of 9.5% from the low made in either November or December to the high made in either December or January.
This phenomenon has a perfect record since 1945  although the bear market year of 1968-69 was a near miss. Since 1968, the average gain has improved to 10.50%.
So far this year, the low was seen on November 13 at Dow 17,245. Since the Dow closed Monday at 17,720, the minimum criteria for this particular tendency has already been met unless the Dow drops below 17,245 sometime in December. Since this would mean a 475 point decline, we feel that it is unlikely.
But, there is more to it than just a point gain. There is also a time consideration. In 53 of the last 67 years, the ultimate peak occurred in January. And of the 14 December tops, nine occurred within the last four days of the month. Indeed, there have been only two instances in the past 45 years when the top took place within the first 10 trading days of December and that is a very important point to consider.
There is also a price consideration. The average gain over the past 41 years is 10.68%. Since 1968, there have been gains of less than 5% in only four cases, one of them last year.
The gain so far from the November low is 475 points or 2.75%. An average gain would give us an additional 1370 Dow points sometime between now and the end of January.
Sentiment wise, the 5 week moving average of the consensus of bullish advisors from Consensus Inc. was recently at 45%. That is one reason we saw a rally from the August September lows. We don’t think the rally has fully reflected that dip in sentiment. THE PUT CALL RATIO IS BULLISH.
Another reason for the big October move is the weekly put call ratio. The 5 week moving average was recently at 1.15. This is the highest level since 2011. Again, the indices do not appear to have fully responded to these high readings. GOLD
The monthly chart below is that of the GLD, or gold ETF. Things can and do change rapidly in the markets, but right now that chart, which is making a pattern of lower lows, looks absolutely dreadful. CANADIAN MARKETS
We remain bullish on the Canadian markets, but it is a real struggle right now because they are not acting as well as U.S. markets due to their natural resource makeup. The Toronto Exchange was recently very oversold and it looks like it hasn’t rallied enough from that condition. FINAL THOUGHTS
Not everything is rosy. Insiders are selling at a rate not seen since May of 2011. This was prior to a significant decline. Nothing is ever 100%. If it were, I would think it was a bit too perfect. Also, small caps have been lagging. We would feel better if they were actually leading.
The market marches to its own logic. After the Paris attack, the indices went straight up. This was due to an oversold condition.
INTERMEDIATE TERM
Since 1993, we have given instructions to mutual fund investors to be either 100% invested or 100% on the sidelines. According to Timer Digest, of Greenwich, CT, which monitors over 100 advisory services world wide, we are only one of four
services to have beaten the buy and hold over the past ten years.
We were rated the # 1 stock market timer for the ten year period ending in 2003, 2004 and 2005. In 2006, we slipped to # 3. At the end of 2007 we were ranked # 4.
Since then, we have dropped out of the top ten for stocks, but we were bond timer of the year at the end of 2007 and 2008 which means we were ranked number 1 both years. We were rated # 1 in gold timing for 1997 and again in 2011. We were #2 in gold for the year 2014.
MANAGED ACCOUNTS
In association with Financial Growth Management, we can make available to you a low risk bond income program. Your account would be actively managed through TD Ameritrade or Trust Company of America.
Your funds will be exchanged between high-yield bond funds and money market funds based on a proprietary mathematical model. Our goal is to return 10-12% per year during a 3 to 5 year market cycle with very low risk.
If you would like more information, please contact Ray Hansen at 714 637 7784.
END OF LETTER
TODD MARKET FORECAST
Stephen Todd, Editor and Publisher
P.O. Box 4131, Crestline, CA 92325-4131
Registered Investment Advisor   Phone 909 338 8354
www.toddmarketforecast.com  Issue 12 Year 30  e-mail –toddmarketforecast@yahoo.com
December  2015                           Due the first Tuesday of each month.