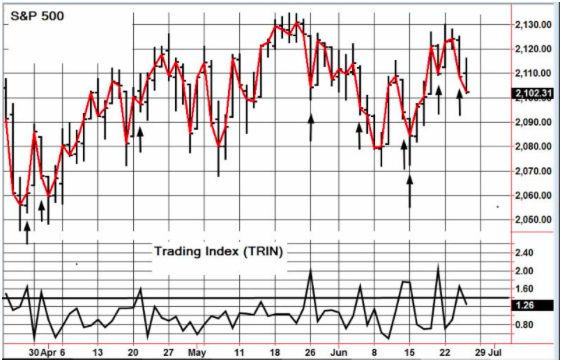 STOCKS:  It’s hard to believe that three days ago, the S&P 500 was within a whisker of all time highs.

Near term bounces aside, it looks a bit grim. The advance decline line is close to a 5 month low and the Transports, which we featured yesterday broke the support we discussed.

GOLD:  Gold was down less than $1. Not much to report here.

NEXT DAY: Friday should be higher.

CHART:  On Wednesday, the Trading Index (TRIN) closed above 1.50. When this happens, the market tends to bounce within a day or two. In the previous 8 occurrences, this rule has only failed once. That was in early June, the 5th arrow from the left. System 7   Buy the SSO at the opening. Sell at the close if there are more declining issues than advancing ones at 3:45 EST, otherwise hold over the weekend.

Interesting Stuff  We cannot do great deeds unless we’re willing to do the small things that make up the sum of greatness.—   Theodore Roosevelt

S&P/TSX VENTURE COMP: The TSX was down 1.

THE REST:  The dollar pulled back slightly. Silver and crude oil were lower.

We’re on a buy for the dollar and a sell for the euro as of June 23.

We are on a long term buy signal for the markets of the U.S., Canada, Britain, Germany and France