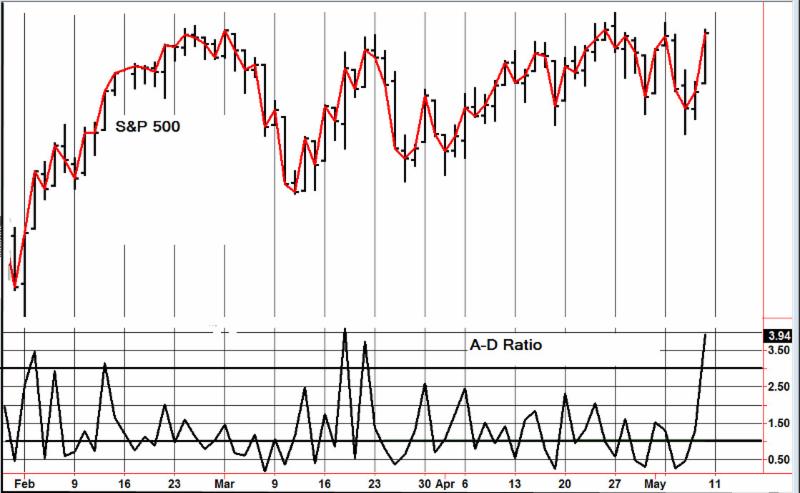 STOCKS: Everyone was buzzing about the non farm payrolls. Good enough to suggest strength in the economy, but not so strong as to goad the Fed into raising rates. We think that this is nonsense. The economy is not strong. More on that in the interesting stuff section.

A major reason for the rally was a surge in European equities as a result of the Tory win in Great Britain.

GOLD: Gold was up $5. Gold investors were encouraged by the non farm payrolls.

CHART: The advance -decline ratio was over 3.0. When this happens, we normally have further to go on the upside.  On the other hand, the S&P 500 is in heavy resistance. We’ll keep a close eye on this. News and fundamentals:  Jobless claims were 265,000, less than the consensus 280,000. On Friday we get the dreaded non farm payrolls.

Interesting Stuff  Wages were higher by 2.2% year over year. This is anemic and is why we aren’t all that impressed. These are still not good jobs. The good factory jobs have been sent to places like China and now they are talking about another trade deal to ship even more jobs out of the country.

THE REST:   The dollar also was up slightly. Silver and crude oil were both higher.

We’re on a sell for the dollar and a buy for the euro as of April 28.