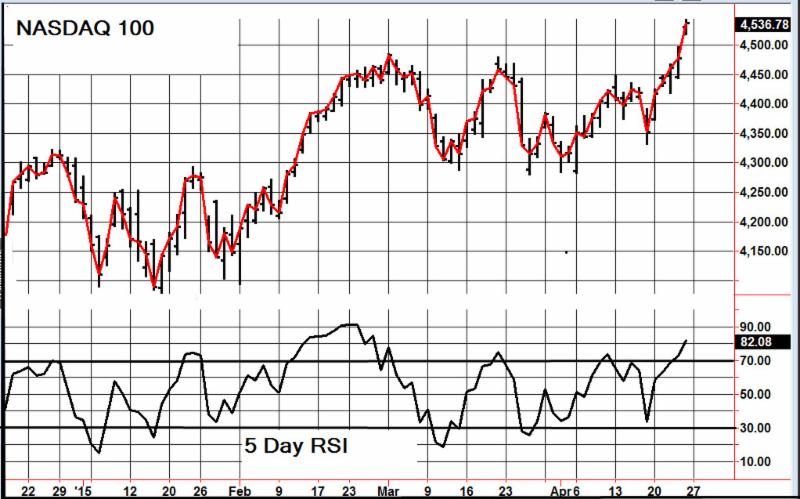 “The S&P 500 made an all time high, joining the NASDAQ Composite and the advance decline at that august level.”

STOCKS:  The S&P 500 made an all time high, joining the NASDAQ Composite and the advance decline at that august level.

The reason seems to be that earnings are somewhat better than originally thought and continued weak economic data should stay the Fed’s hand when it comes to raising rates.

GOLD: Gold lost another $16. This time the theory is that a rally in tech stocks encouraged investors to get out of a safe haven and get into stocks. I wonder how they know that. Volume on the NYSE was pathetic. The lowest of 2015.

CHART: The NASDAQ 100 looks like it’s really taking off. It’s overbought, but so far that doesn’t matter. Price itself is the most important indicator. News and fundamentals:  Durable goods orders rose 0.6%, more than the expected rise of 0.4%. On Monday we get the Dallas Fed Mfg Survey.

S&P/TSX VENTURE COMP: The TSX was down 2.

We’re on a buy for the dollar and a sell for the euro as of March 30.

We’re on a sell for crude oil as of today April 21.

We’re on a buy for the Toronto Stock Exchange as of March 16.