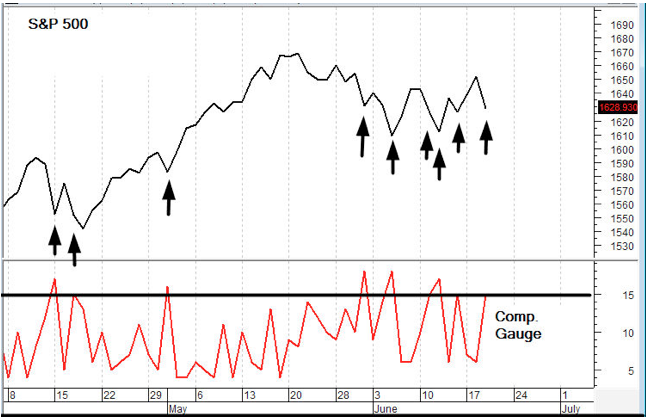 STOCKS: The Fed sees a brighter outlook for the economy and this was taken as a sign that the central bank would, at some point, begin backing away from its bond buying, or more accurately money printing.
What makes this laughable is the fact that the Federal Reserve’s predictive powers are historically pathetic. Nevertheless, a lot of investors think that Fed members can “see” what lesser men cannot. Totally ridiculous.
GOLD:  Gold lost another $16. Part of the reason is that the Fed “sees” diminished inflation and of course, part of gold’s allure is as an inflation hedge. We’re now getting a second full retest of the April lows.

CHART: We report the single day reading of the Composite Gauge on this hotline. When it is 15 or above, the next day or two tends to be higher. That’s one of the elements of our system 2 signal which did give us a buy today. TORONTO EXCHANGE:    Toronto was down 99.

THE REST: The dollar surged up. Silver, copper and crude oil were lower.

Our intermediate term systems are on a sell signal as of June 4, 2013.

System 7 traders   We are in cash. Stay there on Thursday.