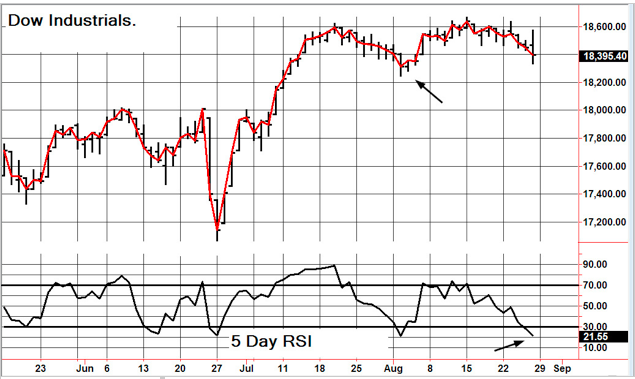 STOCKS: Today was all about the Fed. When Janet Yellen’s speech was made public, the Dow seemed somewhat satisfied and rallied to be up over 100 points.

Then Vice Chair Stanley Fischer decided he needed some publicity and came out with a more hawkish statement on interest rates and the fear of a quarter point rise in Fed Funds caused an immediate swoon.

GOLD: Gold was flat. In spite of a sharp rise in the dollar and higher rates. Actually, the yellow metal was much higher earlier in the day so it did drop somewhat.

CHART: This is the same chart as yesterday. The Dow is even more oversold (bottom arrow). It is also approaching the level that stopped the last decline (top arrow). It should move higher soon. If not, it is a sign of a more significant decline. Our intermediate term system is on a buy.

System 8 We are in cash. Stay there.

News and fundamentals: The second revision of Q2 GDP came in at 1.1%. Even worse than the first estimate. The trade deficit was $59.3 million, better than the expected $63.2 billion. Consumer sentiment was 89.8, lower than last month’s 90.4. On Monday we get the Dallas Fed mfg survey and personal income.

Ordinary riches can be stolen; real riches cannot. In your soul are infinitely precious things that cannot be taken from you. ————Oscar Wilde

TORONTO EXCHANGE: Toronto was up 9.

BONDS: Bonds were down sharply.

THE REST: The dollar was sharply higher. Silver was mildly higher. Crude oil was flat.