Time To Sell Your Gold Now 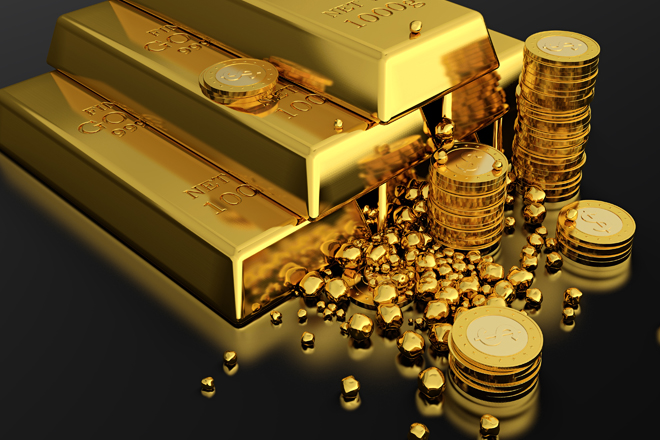 Nope. According to this Bullish View (vs the Bearish View you can read  HERE in Michael Campbell’s article today by Martin Armstrong)

Time to Sell Your Gold?

Precious-metals investors have had quite a scare in recent weeks. Since late November, gold has lost nearly $100 an ounce – a decline of almost 6%! During the same time frame, silver has slipped by nearly 12%.

Having a strong stomach is part of investing in a volatile market. If, like many, you are feeling financial heartburn over gold’s recent downward movement, I’d like to give you a reason to actually get excited when your favorite yellow metal takes a dive – a bit of journalistic Pepto Bismol, so to speak.

First, we’ll discuss the main driver behind gold’s most recent dip, and why this is just irrational herd behavior rather than financial and economic sense. Then we’ll review the reasons we own gold and why the recent price reduction is actually good for you as a gold investor.

Out from behind the black curtain came the news from the FOMC meeting:

“…a few members expressed the view that ongoing asset purchases would likely be warranted until about the end of 2013, while a few others emphasized the need for considerable policy accommodation but did not state a specific time frame or total for purchases. Several others thought that it would probably be appropriate to slow or to stop purchases well before the end of 2013, citing concerns about financial stability or the size of the balance sheet

. One member viewed any additional purchases as unwarranted.” [Minutes of the Federal Open Market Committee, December 11-12, 2012]

This is the wonderfully wishy-washy, opaque language we’ve all come to know and love from the Fed and the FOMC. It leaves all options open while maintaining a level of uncertainty in the markets.

The media dumped fuel on the fire when it began asking if this statement foreshadowed an end to quantitative easing. With the potential for an end to the Fed’s money-printing – however unlikely – it’s no wonder that those without a solid understanding for gold investing got scared out of the market.

While the mainstream press was busy trying to define what the FOMC meant by “few” and “several,” they forgot about Ben Bernanke’s stated plan to tie the continuation of monetary stimulus to the rate of unemployment. Without an unemployment rate below 6.5% or a CPI above 2.5%, the printing will continue.

On January 4, 2013, CNBC’s Steve Liesman interviewed the president of the St. Louis Fed, James Bullard. When asked what time frame the Fed should end the current round of quantitative easing, Bullard firmly reiterated the Fed’s position:

“Why are we talking about dates? The idea is to have state contingent policy. This depends on the economy… It should be if the economy performs well in 2013, the committee will be in a position to think about going on pause with its balance sheet policy. If it doesn’t do well, then the balance sheet policy will probably continue into 2014.”

To take the point even further, let’s recall the tight spot the Fed is in with respect to the national debt andinterest rate

With every dollar of increase in federal deficit spending, the pressure on the Fed to maintain its zero-interest-rate policy and to continue to purchase Treasury debt increases. Also, even if QE3 does end, interest rates will surely rise, and the Fed will be forced to start up the printing press once again.

The takeaway here is that it’s important not to get caught up in the short-term price fluctuations, but to invest according to a long-term premise. And that premise is the same as it has always been: governments around the world will continue to print away their debts in order to maintain a constant stream of entitlements flowing into their constituents. Without the printing of fiat currency to buy voter support, a politician’s career becomes significantly shorter. If you still believe this premise, the long-term case for gold is open-and-shut.

After reviewing the facts, it’s clear the Fed has no intention of ending its policy of continued monetary easing. The fears over a catastrophic drop in the gold market are unwarranted. Gold is still the best way to hedge against inflation.

As was stated above, it’s important to look at the long-term trend for gold. The chart below illustrates this point beautifully. Gold has taken an aggressive, ten-year march with a short one-year break in 2012. Thus, if you held to the premise that gold is a long-term instrument for the preservation of wealth, you would have come out ahead had you purchased anywhere in the last decade. So what does this most recent downturn mean for you, if anything? As you may have heard Chairman of Sprott US Holdings Rick Rule mention, the gold market is like any other market – including the supermarket. When your favorite food drops in price, you don’t sell your stockpile back to the grocery store. You buy more of it! The same is true for gold. Why not exchange some of that fiat paper for something you truly hold valuable? Better yet, why not make the exchange while that fiat currency is trading at a premium to gold?

If you haven’t already, please take some time to browse the Hard Assets Alliance site and consider opening a SmartMetals account. SmartMetals is a perfect way to acquire gold bars and coins with the added benefits of offshore storage. With storage facilities in New York and Salt Lake City as well as London, Zurich, Melbourne, and our new facility in Singapore, you will be able to diversify your assets internationally and avoid the political risks of any one nation. You can download the free SmartMetals Action Kit for more details.

The bottom line is this: Monetary easing will continue around the world. Governments cannot afford the political ramifications of austerity. As the short-term traders and uneducated investors dump their gold positions, use the opportunity to buy more. It has been our experience that these dips in price often result in a subsequent price surge. Gold is on sale, and sales don’t last forever…

Next, we’ll discuss how the paper/ETF markets affect the price gold in both inter-day and intra-day trading.

$20,000 in cash prizes to be won in The Horizons ETFs Biggest Winner Trading Competition. Learn more