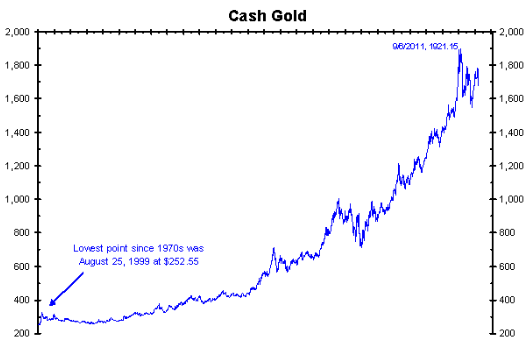 Not if you’ve Mark Leibovit who argues that “Gold retraced into the mid 1600s as hoped, silver did not quite reach the desired 30-31 level. Meanwhile, should spot gold clear 1792 and spot silver clear 37.60, fasten your seat belts – a moon shot will then likely unfold before our eyes.“ The 5 per cent fall, gold’s largest daily drop in more than three years, has triggered a nervous reappraisal of the precious metal among some investors: how strong can the fundamentals of the market be, they ask, if a non-denial from the Federal Reserve chief can have such a marked impact? The nervous shake-out has continued this week with gold on Tuesday dipping below its 200-day moving average, a technical indicator closely watched by traders, for the first time since mid-January to touch a low of $1,664 a troy ounce. Many analysts and investors believe the eventual shift to monetary policy tightening by the Federal Reserve will mark the end of gold’s decade-long rally, which has lifted prices from less than $300 an ounce in 2001 to almost $2,000 last year. By promising to keep rates at zero until 2014, therefore, the Fed has pushed back the gold price peak, which many analysts had expected to come in late 2012 or early 2013. “The consensus within the Fed to extend the zero interest rate policy to beyond 2013 does, all other things being equal, imply an extension of the gold bull market,” says Philip Klapwijk, head of metals analytics at Thomson Reuters GFMS, a leading precious metals consultancy. “Maybe in the short term QE3 matters,” agrees a gold specialist at a large hedge fund. “The more important thing is that rates are on hold and I don’t think that is going to change.”

With more than 40 years as an economist to his credit and claiming gold as the “biggest position in my life,” Gloom Boom & Doom Report Publisher Marc Faber assures us that gold is nowhere near a bubble phase, but cautions that corrections of 40% are not unusual in a bull market. At the end of March, Faber will share his secrets for surviving corrections at the World MoneyShow in Vancouver. In advance of that appearance, he sat down with The Gold Report  for this exclusive interview where he discusses his bias for portfolio diversification in terms of geographies as well as asset classes.

“This year the Gold Price may not exceed the $1,922/oz high that we reached on Sept. 6. Maybe it will. I’m not a prophet. I’m just telling people that I’m Buying Gold and holding it. I don’t speculate in gold. If you Buy Gold, you better understand that the price could always move to the downside. If you don’t understand that, don’t invest in gold—or in anything.”

Mark Leibovit’s Daily Gold Comment (More on Mark’s services is available at http://www.vrtrader.com/login/index.asp including a Trial Offer. Mark was  #2 Gold Timer for 2011 and the #1 Gold Market timer for the 5 year period ending in 2010)

Short-term, gold and silver are continuing to bounce off oversold positions. While gold retraced into the mid 1600s as hoped, silver did not quite reach the desired 30-31 level. Meanwhile, should spot gold clear 1792 and spot silver clear 37.60, fasten your seat belts – a moon shot will then likely unfold before our eyes. The sell-off was clearly ‘engineered’ and the scoundrels could easily engineer another one at a moment’s notice. This is why I encourage ‘stacking’ silver and gold. In other words, using weakness to accumulate the physical metal and put it in a place where government can’t get it or find it. I’ve been asked when will be the time to sell silver or gold. Will it be when it hits a particularly high price such as $11,000 in gold or $500 in silver? I cannot answer that question with any great certainty this morning, but my gut feeling is the time to sell will likely be when THE ENTIRE STRUCTURE OF THE WESTERN FIAT BANKING SYSTEM COLLAPSES AND SOMETHING ELSE IS ABOUT TO REPLACE IT!