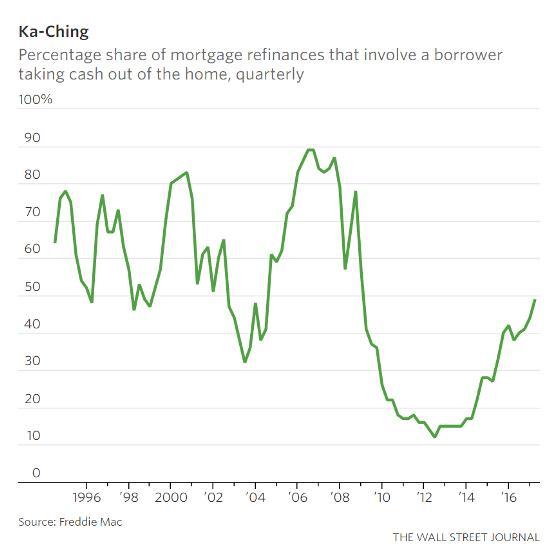 Housing is hot again, but lately it’s been overshadowed by flashier bubbles in government debt, tech stocks and possibly cryptocurrencies.

Still, the warning signs are spreading. Today’s Wall Street Journal, for instance, reports that homeowners are back to using their houses as ATMs:

Homeowners Are Again Pocketing Cash as They Refinance Properties

Americans refinancing their mortgages are taking cash out in the process at levels not seen since the financial crisis.

Nearly half of borrowers who refinanced their homes in the first quarter chose the cash-out option, according to data released this week by Freddie Mac. That is the highest level since the fourth quarter of 2008.

The cash-out level is still well below the almost 90% peak hit in the run-up to the housing meltdown. But it is up sharply from the post-crisis nadir of 12% in the second quarter of 2012.

In a cash-out refi, a borrower refinances an existing mortgage with a new one, typically at a lower borrowing cost, that has a higher principal balance than the existing one. This allows the homeowner to pay off the old mortgage and still have cash left over for other uses. Mortgage rates remain low by historical standards, though. The average rate for a fixed, 30-year mortgage was 3.95%, Freddie Mac reported this week.

Meanwhile, rising home prices have helped increase the equity homeowners have in their houses. This allows more people to refinance to capture the benefit of lower mortgage rates.

And borrowers whose homes are rising in value are often more likely to be interested in refinancing for cash. For example, in Denver and Dallas, where home prices have jumped, more than half of refinancers opted for cash last year, according to Freddie Mac.

To some housing-market observers, the fact that more homeowners are tapping their homes for cash represents a healthy confidence in the economy. It comes against a backdrop of continued gains in employment.

At the same time, the increasing use of cash-out refis causes some concern since, in the run-up to the financial crisis, borrowers used their homes like veritable ATMs.

Len Kiefer, Freddie Mac’s deputy chief economist, says this time has been different. Borrowers now are subject to stricter standards when they get a loan or refinance a mortgage. There is also less money at stake now than a decade ago.

Cash-out refis in the first quarter represented about $14 billion in net home equity compared with more than $80 billion in each of three straight quarters in 2006. On an annual basis, total home equity cashed out in 2016 was $61 billion, according to Freddie Mac, versus $321 billion in 2006.

“People have been using cash-out for years,” Mr. Kiefer said. “From a personal-finance standpoint, it can make a lot of sense.”

One example is a borrower using the cash from a refinance to consolidate credit-card debt that has far higher yields. That in many cases can produce a big savings in debt-servicing costs by replacing debt that has double-digit interest rates with a loan that has a rate in the low single digits.

Here we go again. In every cycle, destructive behavior like using home equity to pay off credit cards or take vacations or whatever starts to surge. And every time the banking/real estate complex trots out paid spokesmen masquerading as economists to explain that this behavior is perfectly safe because everything else is going so well.

This deception eventually blows up in their faces, the pseudo-economists are disgraced (See Realtors’ Former Top Economist Says Don’t Blame the Messenger) and the people suckered in by the experts’ assurances are stuck with bills they can’t pay.

If cash-out refis continue to soar in the second quarter, then housing is officially a bubble again — with one big difference: This time around it’s just one of many, which means the eventual reckoning will be a lot more complex and interesting.