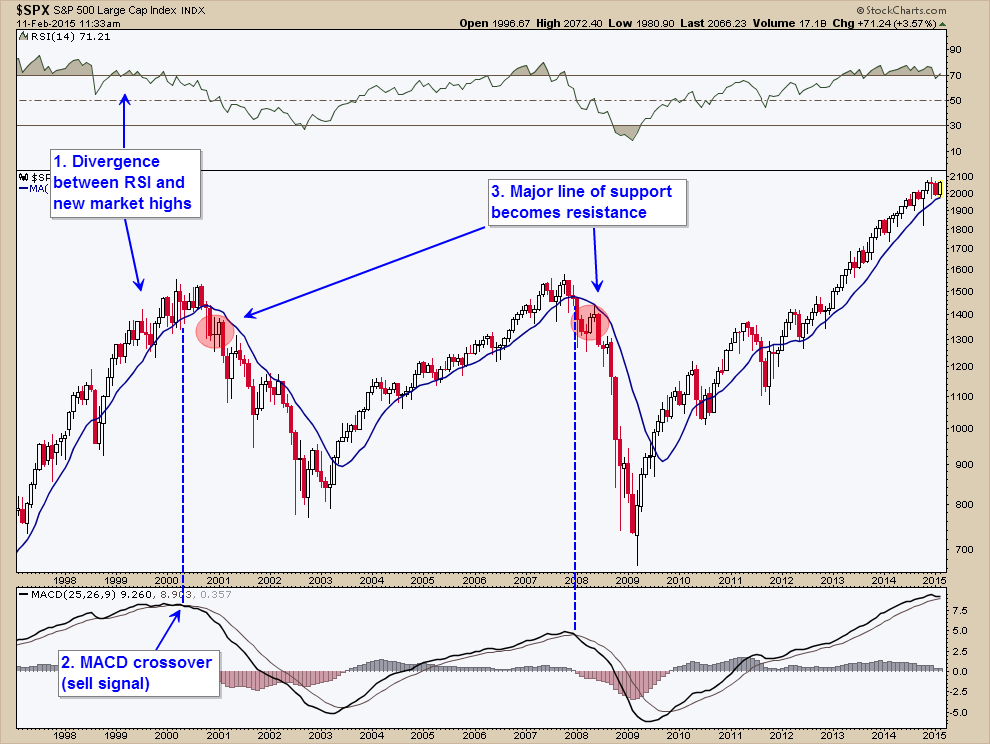 It is said that an image is worth a thousand words. This chart conveys a very important message when it comes to the future direction of the stock market and whether investors should be concerned about a coming bear market. We explain the chart in more detail below. In the very top panel of the chart you’ll notice that the stock market as measured by the S&P 500 is overbought on a long-term basis. This is no surprise and shows that we are now trading at levels seen during the two prior bubbles. That said, the stock market can remain in overbought territory for an extended period of time, which is why we need to focus on more timely signals for when this condition may reverse.

The first technical warning sign that we should heed is marked by a significant divergence between the relative strength index (RSI) and the market itself. This is noted by a declining pattern of lower highs in the RSI as stocks continue to make higher highs, a sign that the market is “topping out”. In the late ‘90s this divergence persisted for around two years each time the market pushed higher and began to signal alarm starting around 1998. In 2007 this divergence took place over a much shorter period (around six months) before the market finally succumbed to massive selling. Starting around late 2013 we’ve seen the RSI flatten while the market has pushed higher. At this point, it will be important to monitor whether this divergence is resolved or confirmed in subsequent moves. Again, such a divergence can persist for longer than expected (as in the late ‘90s), but does raise a red flag and indicate the market is in a topping process.

The second technical sign to look for is a major crossover in the MACD (moving average convergence-divergence) indicator shown in the bottom panel. This is often used by technical analysts as a buy and sell signal. As Investopedia explains, “when the MACD falls below the signal line, it is a bearish signal, which indicates that it may be time to sell.” As shown by the dotted lines, a MACD crossover occurred in May of 2000 and December of 2007. Currently, the MACD is close to giving a crossover sell signal and will likely do so if the market again breaks below its 12-month moving average. That brings us to the third technical signal.

When a major line of support becomes resistance, you now have confirmation of a trend change in the market. This occurred around January-February of 2001 and May-June of 2008 (see red circled regions on the chart) when the S&P 500 failed to break back above its 12-month moving average. After that point in time, the market persisted in a bearish downtrend until a confirmed change of direction with a new bull market. Currently, the market is trading above this major line of support but did briefly break below in October of last year.

The market is overbought and showing signs of divergence, which may indicate a market peak. Since this condition can persist, we will want to confirm whether any subsequent highs (if they occur) coincide with lower RSI readings. Secondly, we will want to see a major sell signal triggered by a crossover in the MACD, as occurred at both prior tops in 2000 and 2007. Thirdly, it will be important to confirm a major trend change in stocks when the 12-month moving average no longer acts as support, but now becomes a line of major resistance.

Again, we should not presuppose this pattern will play out on an immediate timeframe. The market may make new highs and remain in overbought territory longer than anticipated. As always, opinions are quite divided on whether stocks are already in a bubble or, conversely, in the beginning stages of a much larger advance. There are too many moving parts to predict such outcomes with any certainty. Instead, we must monitor market action, incoming data, and make adjustments as the situation requires. The chart presented is one of many tools for doing just that.