Three Peaks and a Domed House? 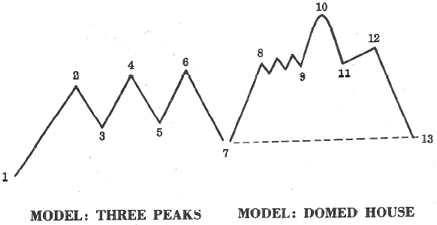 A possible 3PDh formation can be seen on the Dow Industrials index chart. The peaks in Dec’13, July’14, and Sept’14 are the three peaks. At 9mo, the distance between peaks one and three meets Lindsay’s requirement that they be no more than 10mo apart. The Sept/Oct. decline is the separating decline and is the only weak park of the formation. Lindsay was adamant that there be a base composed of two tests of the low. If the base was descending (lower lows), it indicated a longer than normal domed house. If the base was ascending, it indicated a market that was in a hurry to get to its final high. In this case there is no base. If we remind ourselves that history rhymes but it doesn’t repeat, we can think of the Oct rally as more closely resembling an ascending base. In this case we need to count the 222-day interval from the low of the separating decline. This count points to a final high for the bull market near May 25.

I’m willing to accept a missing base as the formation does contain the requisite five-wave reversal(first floor roof) in January (see roman numerals).

If the hybrid forecast for a low on Mar. 30 is correct, that will set up a low-low-high interval of 56 days pointing to a top on May 25.

A high in May matches the 35wk cycle high expected then.

Caveat: A Domed house at the top of a bull market seldom lasts as long as a formation that begins at a bear market low. Also, an ascending base reflects a market that is in a hurry to get to the top. These counts may be pointing the right shoulder of the domed house. About the Author: Ed Carlson

Ed Carlson, author of George Lindsay and the Art of Technical Analysis, and his new book, George Lindsay’s An Aid to Timing is an independent trader, consultant, and Chartered Market Technician (CMT) based in Seattle. Carlson manages the website Seattle Technical Advisors.com, where he publishes daily and weekly commentary. He spent twenty years as a stockbroker and holds an M.B.A. from Wichita State University.