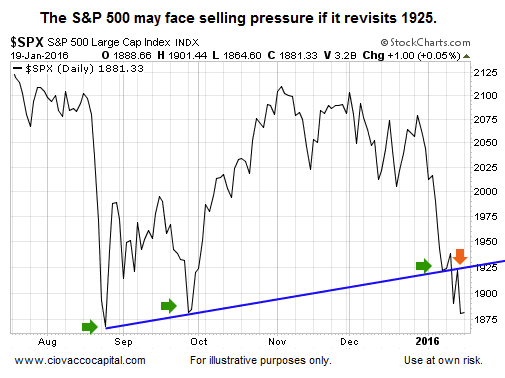 The S&P 500 has already violated the blue trendline below and retested the line below the orange arrow. If the bulls can mount a rally this week, 1925 can be used as a short-term guidepost. A survey of CEOs aligns with the stock market’s recent weakness. From Bloomberg:

Chief executive officers have turned pessimistic on global economic growth, according to a new survey by PricewaterhouseCoopers LLC.

Released on the eve of the World Economic Forum’s annual meeting in Davos, Switzerland, the poll of 1,409 CEOs from 83 nations found 27 percent expect the economic outlook to improve this year, a fall from 37 percent last year. Twenty-three percent said it will worsen, up from 17 percent in 2015.

From a risk-reward perspective, the present day weekly NYSE Composite Stock Index’s chart has some of the same concerning elements found in September 2008. This week’s stock market video compares the chart below to the 2016 version.